Ode to a Luncheonette

Hinsch’s seemed too good to be true.  Turns out it was.  Various internet sources report that the venerable confectionary and luncheonette, on 5th Avenue by 86th Street in Bay Ridge, Brooklyn, has suddenly shut its doors, and two of New York’s finest old signs have gone dark some 63 years after they went up. 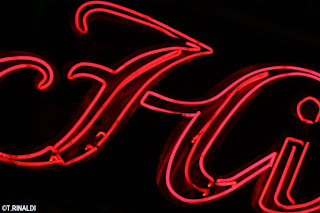 Hinsch's occupied this storefront at 8515 5th Avenue in Brooklyn for 63 years. (T. Rinaldi)

This past summer, I gave Hinsch’s a call to ask about the old neon signs that hang over their storefront.  I’ve made a hundred or so calls like this trying to gather as much information as I can about these old signs before the details of their provenance vanish into the ether.  Sometimes the calls go nowhere.  Sometimes a grumpy voice on the other end hangs up on me.  But there are other times when friendly store owners are only too happy to tell me about their family businesses.  I can very often sense great pride in the way they speak. 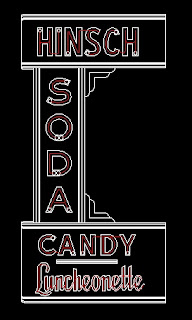 The woman who answered at Hinsch’s passed the phone to John Logue, Jr., the owner.   Mr. Logue spoke with a polite, friendly cadence, every bit as pleasant as the business he ran - it was a pleasure to talk with him.  A business association tallied up 685 confectioners in New York 45 years ago, he told me.  This summer he knew of only four that survive.*

Hinsch’s had been in business at the same location since 1948, but the shop had roots that went back further, having operated on 18th Avenue in Bay Ridge previously.  In 1948, old Mr. Hinsch moved the business to its current address, where a confectioner’s called Reichert’s had already been in operation for at least a decade.  The city’s tax photo from c. 1940 shows Reichert’s storefront with neon signs very similar to the ones Mr. Hinsch installed in 1948 (this was fairly common – many of New York’s old neon signs replaced predecessors of similar configurations). 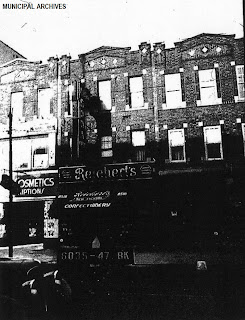 Before 1948, 8515 5th Avenue was home to Reichert's Confectionery, with neon signs very similar to those installed by Hinsch. (Municipal Archives)

Mr. Logue’s father began working for Hinsch before the shop moved from its old location on 18th Avenue.  He bought the business outright in 1961 and later passed it to his son, the affable Mr. Logue who kindly lent me a few minutes of his time this summer.

We may never know who Hinsch hired to make his signs back in 1948 – Mr. Logue quite understandably had no idea; the information may or may not lie buried in Buildings Department paperwork somewhere.  The little “Union Made” tag appears to be too faded to yield the numeric code that might identify the maker.  Whoever it was did a fine job.  The signs looked great.  And they lasted 63 years, right up to the day Hinsch’s closed.  I echo Project Neon's plea for a neon angel to give these signs a good retirement.   Meantime, I’ll remember a frigid night in January a few years back, after hours of traversing the city seeking out ancestral neon, when refuge came accompanied by a cheeseburger and a coke, slid my way across the countertop where untold thousands of burgers and cokes had been served up over the  decades. 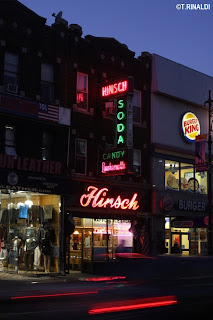 Oh well, I guess we still have Burger King.

*The other three confectioneries Mr. Logue mentioned are the Anopoli Ice Cream Parlor on 3rd Avenue at 69th Street in Bay Ridge, and two outside the city limits - Itgen’s Ice Cream Parlor in Valley Stream, and Krisch’s, in Massapequa, the latter with a lovely neon sign of its own.  There is also Eddie’s, in Forest Hills, also with neon.

UPDATE: As of December 2011, Hinsch's is up and running again under new management.