Lights Out 2020: Signs We Lost This Year

2020 has been cataclysmic for the kinds of businesses featured on this blog.  Sure enough, this year's New York neon casualties count a number of pandemic-related business closures among them: two of them are among the lost businesses featured on the cover of the 12/7/2020 issue of New York Magazine.  Yet somewhat surprisingly, this year's roster of lost neon storefronts is not much out of step with that of previous years.  For those of us who have long bemoaned the loss of New York's independent storefront businesses in the face of soaring rent hikes, it comes as a bit of a curveball to find their survival now threatened by an extreme of under-stimulation that is the very opposite of the hypergentrification that had been their leading cause of death up to now.  One wonders if perhaps the reason this year's list isn't longer than it is might be taken to mean that even a global pandemic is less toxic for such businesses than a typical year's worth of crushing rent-hikes - in other words, if the mandated shutdowns wound up canceling out the lethal effect of the rent-hikes that normally kill off these businesses.
That said, the devastating effect of the pandemic shut-downs is far from over.  Particularly for bars and restaurants, it is not just the old neighborhood stalwarts that need our support - it is everything under the sun.
As always, this year's roundup includes some businesses that closed before 2020, but that only came to my attention this year.  Not listed are some non-neon favorite storefronts we lost, like Gem Spa, John Jovino, the Paris Cafe, or Frank's Cocktail Lounge in Brooklyn.  Nor the ancient R32-series "Brightliner" subway cars that the MTA pulled out of service (but then briefly resurrected) after 56 years with nary a mention.  And the "ones to watch" list is enormously abbreviated - in reality it could include just about every neon storefront in town.  In 2021, it will be incumbent on us to look for ways to help one another get back on our feet again as this (hopefully) uniquely difficult year recedes in our wake. 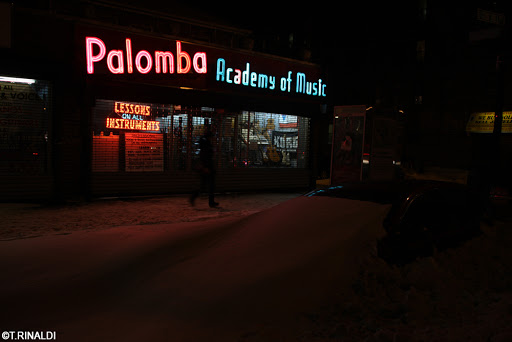 Palomba Academy of Music, 974 East Gun Hill Road, Bronx
The Bronx's Palomba Academy of Music had been a neighborhood anchor since the 1950s, but closed down permanently when in-person music lessons became impossible during the pandemic.  Happily, the sign has been preserved at the American Sign Museum in Cincinnati (with help from Let There Be Neon and photographers James & Karla Murray), but the museum can still use some support towards its restoration. 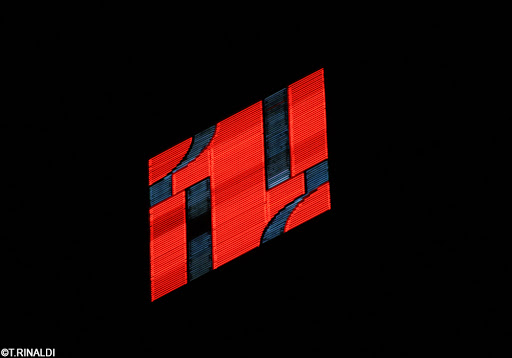 One Penn Plaza, 242 W34th St., Manhattan
The big neon "1" atop this midtown office tower quietly disappeared this year. Though not especially old (the building itself dates from the early 1970s), it was nonetheless one of the largest neon installations in town and one of very few illuminated signs on the New York skyline. 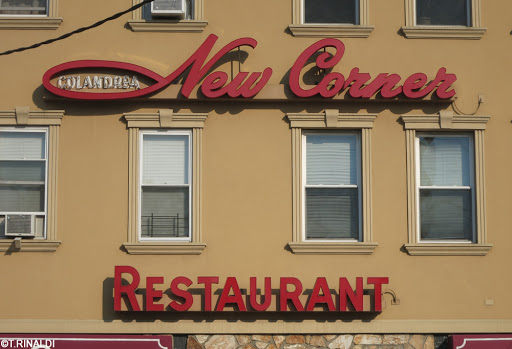 New Corner Restaurant, 7201 8th Ave, Brooklyn
Brooklyn's New Corner restaurant was a neighborhood anchor that traced its origins to 1936; its third generation family owners decided it was time to retire in the face of the protracted difficulties of running a dine-in restaurant amid pandemic business closures. 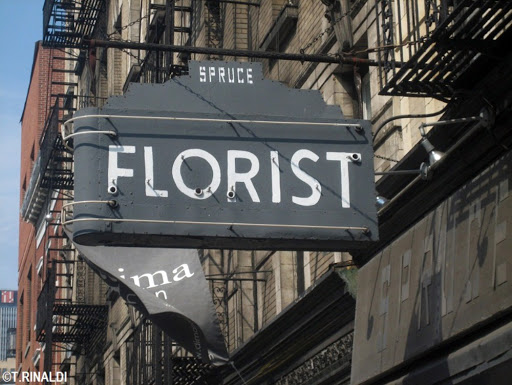 Spruce Florist, 222 8th Avenue, Manhattan
Most recently operated as Spruce Florist, this Chelsea flower shop had earlier been known as Village Florist and earlier still as Nick Case Florist. It had occupied the same 8th Avenue storefront since at least the 1930s until it finally closed around 2017.  The sign hung around for a few more years before it finally disappeared in December.  I am happy to report that it has found its way to a collector who plans to restore it to its former glory. 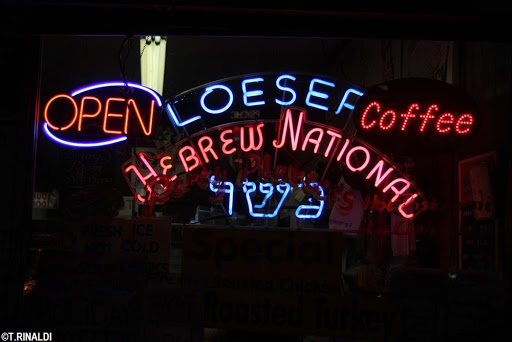 Loeser's Deli, 214 W 231st St, Bronx
This Kingsbridge Kosher deli had been a neighborhood stalwart since 1960.  It appears to have closed permanently at the end of 2019 owing to a buildings department gas line snafu. 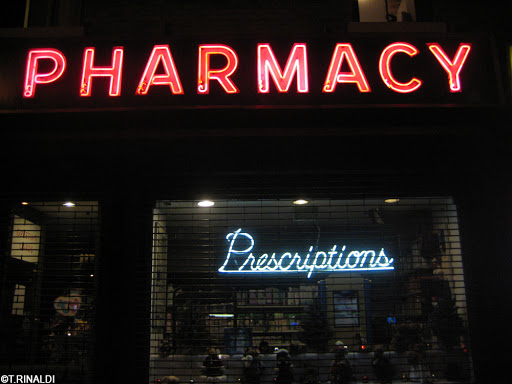 Health Wise Pharmacy, 1494 York Ave., Manhattan
The Upper East Side's Health Wise Pharmacy ditched its circa-1960 neon in favor of plastic-faced LED signs early in 2020.  Its lovely script window sign had already vanished, the result of a stray taxi that launched itself through the storefront back in 2016. 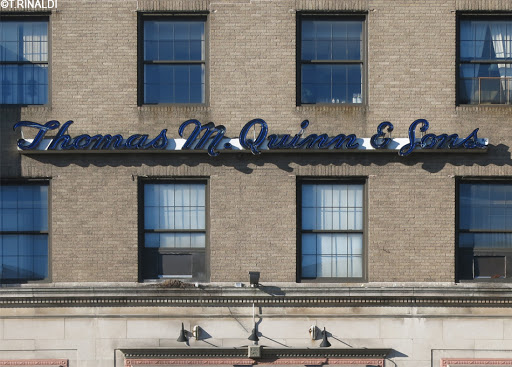 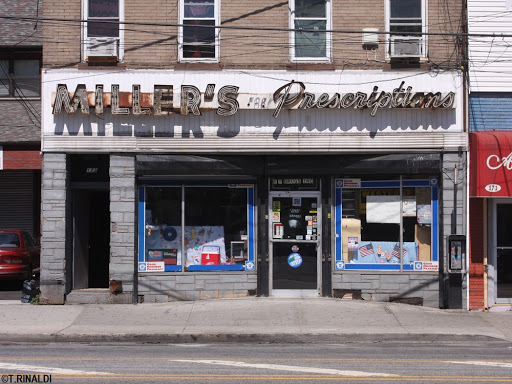 Miller's Prescriptions, 173 Broad St, Staten Island
Miller's is still around but I'm sorry to report that they ditched one of Staten Island's very last neon storefront signs for more LED plastic bleh, which as far as I know leaves just one historic neon storefront on all of the Island. 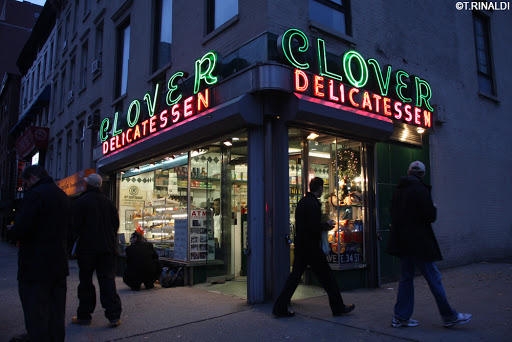 Clover Delicatessen, 621 2nd Ave., Manhattan
Clover was just about everyone's favorite.  Located near the east midtown hospitals, they became a kind of a mascot for many of the frontline workers who trudged back and forth along 34th Street on their way to and from work, and for the neighborhood at large, which they served through three generations of family ownership.  Alas, citing a downturn in traffic and the general difficulties of running a business during the pandemic, the owners decided it was time to bow-out and Clover quietly closed in the summer of 2020.  The family owns the building and is hoping to lease the storefront to a business that might want to keep the signs right where they have been since they were installed in 1956, so stay tuned on this one. 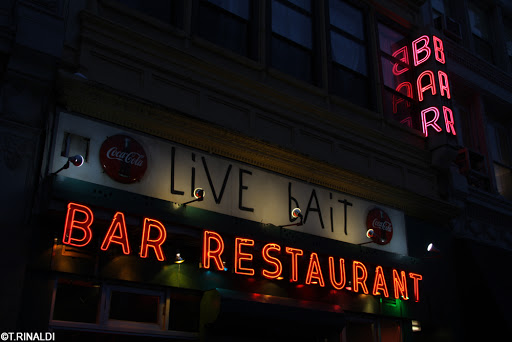 Flat Fixed, 14 E23rd St, Manhattan
One of New York's more vivacious neon storefronts, the restaurant that most recently operated under the name "Flat Fixed" closed up shop amid the pandemic, leaving for-lease banners under those darkened signs. These signs are a bit of a mystery; the vertical BAR sign appears to have been installed here for a business called the Metro Tavern in 1941. The horizontal raceway sign looks to be from the 1950s. Here's hoping a new occupant will set these things aglow again soon. 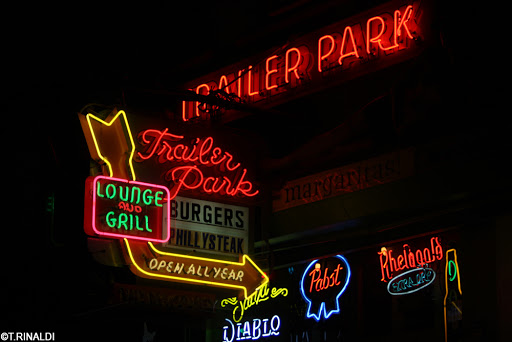 Trailer Park, 271 W 23rd St., Manhattan
Though not old-old, Chelsea's Trailer Park was part restaurant, part museum, and one of the few spots that seemed to stay afloat more than a few years in a neighborhood that has been an epicenter of high rent blight lately.  Its lovely signs are the work of Roadhouse Relics of Austin, Texas.  It's one of several places that have remained closed-up tight since the first pandemic shutdowns went into effect in March. 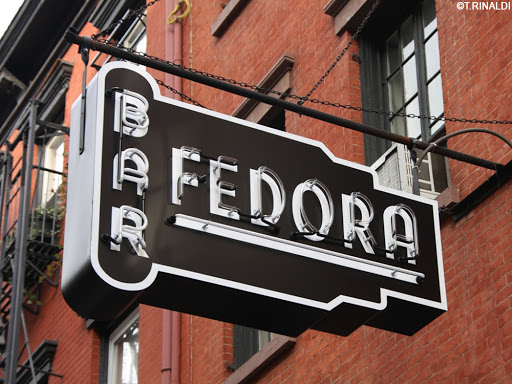 Fedora Restaurant, 239 West 4th St., Manhattan
Both restaurant and sign at Fedora were recent reincarnations of the originals, which had been fixtures here from 1952 until their owner - the beloved Fedora Dorato - retired in 2010 at the age of 90.  The restaurant subsequently reopened as a sort of updated tribute to its former self, in a sequence of events that seemed to be a trend for neon-crowned stalwarts in Greenwich Village at that time (n.b. the cases of Minetta Tavern, Rocco Restaurant et.al).  Cold comfort, perhaps, for those of us who loved these places as they were, but the owners kept the signs (or facsimiles thereof) shining and there was something to be said for that, particularly now as the Fedora reboot has become another casualty of the pandemic.  Whatever comes next, let's hope it keeps this neon landmark of the Village right where it has been for the past 68 years.

We would be remiss to let the year pass without noting one bit of good news, which was the rescue of incredibly old Neir's Tavern in Woodside, Queens, rescued from the brink of extinction by a groundswell of community support just before the pandemic hit.  Though not neon, this is still a cheerful story that might serve as a useful case study as rescue efforts become the order of the day in the year to come. 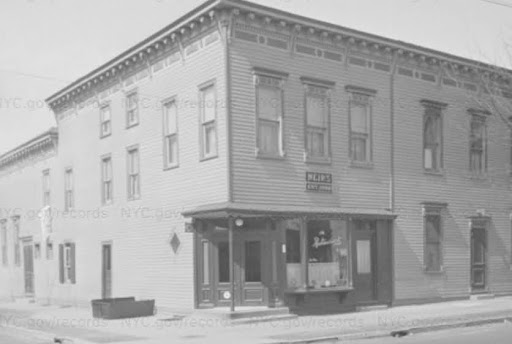 (NYC Municipal Archives)
Posted by T.E. Rinaldi at 9:03 AM No comments: