I had been photographing old neon signs around the city for a year or so when one day a troubling thought crossed my mind:  what if someone asked me to point out New York’s oldest neon sign?  I decided I’d better have a good answer.  Two years later, I’m still waiting for someone to pop the question.  Which is lucky for me, because two years later I still don’t have a good answer.   In theory, records at the NYC Department of Buildings should be able to clear this up.  But these are spotty and difficult to access, so we’ll probably never know for sure which is truly New York’s oldest existing neon sign.

Nonetheless, I have narrowed the pool down to a small handful of contenders, one of which we can be pretty certain holds the title for New York’s oldest.  These signs have demonstrated an incredible tenacity:  each has been in use for more than eight decades, a feat that never ceases to amaze me.  New York’s first neon sign appeared in 1924 (more on that in a later post); it is remarkable to think that these survivors appeared just a few years later.
The oldest sign whose installation date I have yet confirmed is the large neon fascia display on the façade of the Loew’s Paradise Theatre on the Grand Concourse in the Bronx.  The theater opened on September 7, 1929, and the sign is original to its construction.  It is likely the work of Strauss &  Co., Inc. predecessor of the Artkraft Strauss Sign Corp., which had a contract with Loews to install and service signs for their New York-area theaters.
﻿
﻿

There are a handful of old signs for which I could find no documentation, but which are likely as old or older than the Loew’s Paradise display.   Techniques and popular taste in sign making changed so quickly in the 1920s and 30s that one can often guess a sign’s date of fabrication within a few years’ based on design details such as moldings, typeface or silhouette.
Until a few years ago, one contender hung on that gritty stretch of Eighth Avenue near the corner of 46th Street:  the neon emblazoned disk of Collins Bar most likely dated from around the year 1930.  With its fantastic typeface and delicate border molding, it was so picture perfect I was sure it had to have been salvaged from somewhere else and installed here later on as a gesture of retro-chic.  But the city’s tax photo proves that it had been in place at this location since at least 1950.  It disappeared around 2007 as the building’s tenants were forced to move out to make way for new construction on the site.  Here’s hoping it found a good home somewhere.
﻿﻿﻿
﻿﻿﻿

Further down Eighth Avenue in Chelsea hangs the sign of the Spruce Florist.  The city’s tax photo shows it hanging above this storefront as early as 1940, but its style suggests it had already been here for at least a few years by then.  Its tubes are missing from one side and the other hasn’t been lit in years.  It's due for a good refurbishment.
﻿﻿
﻿﻿

Across town, the fragmentary remains of the Orpheum Theatre’s neon marquee cast a warm glow over the east side of Second Avenue near St. Mark's Place.  Only one of the marquee’s three faces remains in place.  For some years its neon tubes were missing, but happily the management had them re-fabricated and the sign glows anew today.  It boasts a particularly handsome typeface.
﻿

Far away in Coney Island, Nathan’s Famous offers what is certainly the city’s most impressive display of old neon today.  Most of the signs at Nathan’s date to c. 1960. But the vertical sign is older, a product of the early 1930s or before.  Like the sign that once hung over Collins Bar, it features a stamped sheet metal border molding typical for that period.  Its distinctive shape and raised metal letters are also representative of the era.

Just around the corner from Nathan’s, the Wonder Wheel is similarly festooned in a barrage of classic neon.  Like Nathan’s, most of the Wonder Wheel’s signs are of midcentury vintage.  The oldest stands modestly beneath the wheel off to one side.  Walker Evans photographed this sign in 1929 or 1930, making it at least 81 years old, and it could be older still.
﻿﻿﻿
﻿﻿﻿

On West Houston Street, one of my favorite neon relics goes largely un-noticed in the shadow of the great neon marquee of the Film Forum.  At first glance, it’s not much to look at.  Give it another look and your keen eye will pick out the sign’s telltale streamlined silhouette and sheet metal box construction that give away its neon origins.
﻿
﻿ ﻿﻿﻿
﻿﻿﻿﻿

Somewhere along the way someone removed its neon tubes and installed crudely re-lettered panels over the sign’s original faces.  Intrigued, I decided to look into the matter on one of my visits to the Municipal Archives down on Chambers Street.   Sign sleuthing in the city records is a hit-or-miss affair.  Lucky for me, the microfilm gods must have been smiling the day I went to look up this bit of commercial archeology. 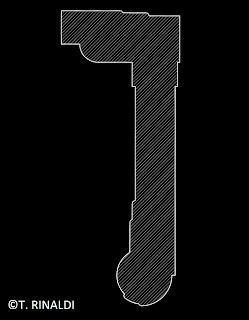 The city’s circa-1940 tax photo shows this sign in its original livery, advertising the wares of G. Cardarelli & Co., purveyors of “fine furniture”.  The sign went up a few years earlier, in 1936.  There the trail goes cold:  the old DOB (Department of Buildings) docket book reveals the year the sign went up, but sheds no light on its fabricator.  For the time being, its design remains unattributed. 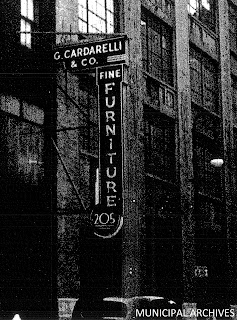 The G. Cardarelli sign as it appeared c. 1940. (Municipal Archives)

As for Cardarelli, a Google search turns up a 1991 blurb in New York Magazine that dates the store’s genesis to 1900.  A piece in the New York Times from around the same time identifies the company’s founder as a certain Gaetano Cardarelli.  In 1936, when the sign went up, the business was under the direction of one Henry Cardarelli, perhaps the founder’s son. 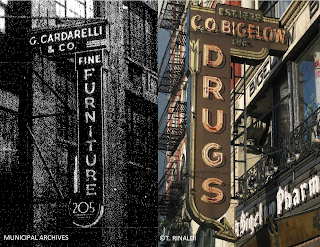 Shades of the old Cardarelli sign can be seen today at C.O. Bigelow on 6th Avenue, installed c. 1938.  Could they have been the work of the same sign shop?  (Municipal Archives; T. Rinaldi)

By 1994, they were gone.  Today 205 West Houston Street is home to United Protective Alarm Systems, whose services this 75-year old sign advertises now.  Maybe one day United will give the old girl a nice refurbishment, with letters better tailored for the sign’s handsome shape – and some neon tubes to boot. 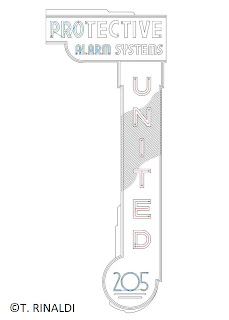 A Town Without Neon

﻿﻿﻿This spring, I was invited by Marilyn Dorato to contribute a short essay on New York Neon for the Greenwich Village Block Association News.  Mrs. Dorato's mother-in-law, Fedora Dorato, ran the well known restaurant Fedora on West 4th Street in Greenwich Village for nearly 60 years before retiring in 2010.  I got to know the Doratos when I inquired about the provenance of the restaurant's old sign, which made way for a facsimile earlier this year.  I think this story makes a good kick-off to the New York Neon blog because it sums up what this project is about and how these old signs are relevant to life in New York today.
A Town Without Neon
by Tom Rinaldi
Reproduced from the Greenwich Village Block Association News, Spring 2011 edition.
Greenwich Village boasts a greater concentration of vintage neon signs than any other neighborhood in New York City today.  I discovered this while photographing these old signs for a forthcoming book that studies them as unique design objects that defined the character of New York’s streets for much of the twentieth century.  My motivation for this project came largely as a response to the disappearance of these signs in recent years.  Of more than 100,000 electric signs installed in Manhattan between 1916 and 1960, I could find less than three hundred still in place since I began this project in September 2006.  Only two have found their way into the collections of museums dedicated to the city’s history.
﻿﻿﻿
﻿ ﻿ ﻿﻿﻿﻿﻿

Outside of Times Square, New York’s mid-century neon storefront signs never reached the level of flamboyance that characterized the neon signs of Route 66.  Yet this has not stopped the city’s collection of old signs from achieving a kind of sanctified status among many New Yorkers today.  Though relatively modest in scale, these old signs have won admiration for their handsome design, their streamlined stainless steel details and pre-Helvetica typefaces.  Their tenacity in New York’s harsh climate is a testament to the skill of the hands that fabricated them: some have been in place for 80 years or more.
But more than anything, I have come to realize, the appeal of these signs owes to their association with venerable old businesses that have survived generations of seismic change to become stalwart neighborhood institutions.  There is no more reliable indicator of such places than a sputtering neon sign over a timeworn storefront.
No wonder then that Greenwich Village is a bastion of old neon.  But here as elsewhere, New Yorkers have mournfully noted the disappearance of these signs amid an ever more frenzied demand for real estate.  When they go, the signs take with them old businesses that give the city’s neighborhoods what is sometimes called a “sense of place” – a unique character or identity.  Alas, this is an inevitable turn-over – a consequence of the same organic process of renewal and reinvention that brought these old places into being in the first place.  But with the disappearance of these signs, the question on the minds of many is whether today’s New York has left room for a new generation of businesses to thrive and survive to become the character-defining neighborhood institutions of tomorrow.
Posted by T.E. Rinaldi at 5:50 PM No comments:

New York Neon is a forthcoming book that will present a documentary homage to old neon signs in New York. The primary motivation for this project is to record the significance of these signs as works of design that characterized New York's 20th century streetscapes. This blog will feature occasional news items related to New York's dwindling number of old neon signs, as well as sundry "cutting room floor" items that won't make it into the book, and other odds and ends.  I expect to post roughly two-to-four times per month, but we'll see how it goes!  More information on the project can be found at www.nyneon.org.
Posted by T.E. Rinaldi at 12:42 PM No comments: