A Neon Relic in Sunset Park

In Sunset Park, Brooklyn, a mysterious neon relic hangs disguised on the facade of a modest little building at the corner of Fifth Avenue and 17th Street.  I spotted it about a year ago, while walking-off a hearty feast of Czech goulash and pilsner at nearby Korzo.  There overhead, a telltale flourish of ornamental sheet metal trim peeks out from a sandwich of ordinary, newish signboards. 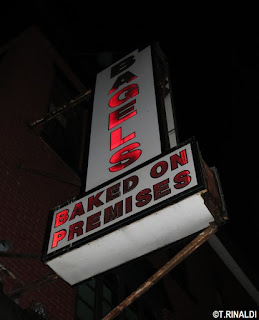 One of the city's very oldest electric signs survives within. The sign's historic appearance is revealed in old photographs by Percy Loomis Sperr, viewable at the New York Public Library's revamped online image archive.  For years during the Great Depression, the NYPL sent Mr. Sperr all over New York photographing ordinary street scenes.  The result of this effort is a survey that almost amounts to a Google Streetview of New York in the 1920s and 30s. 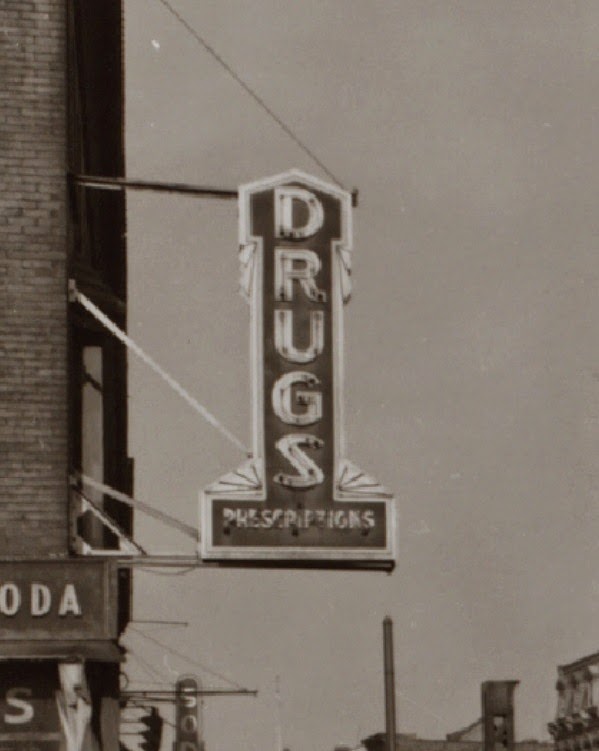 The Sperr photos show our Sunset Park ghost sign in all its neon splendor, advertising a corner chemist, with DRUGS spelled out in classic 1930s "thick-and-thin" lettering garnished by little geometric frills that mark this as a prime example of the work produced by New York's booming neon sign industry in the early-to-mid 1930s.  The drug store itself is long vanished now.  The little storefront appears to have housed a second hand shop in the early 1980s.  Today this corner hosts a crucial quality-of-life kingpin for any New York neighborhood: a bagel shop. 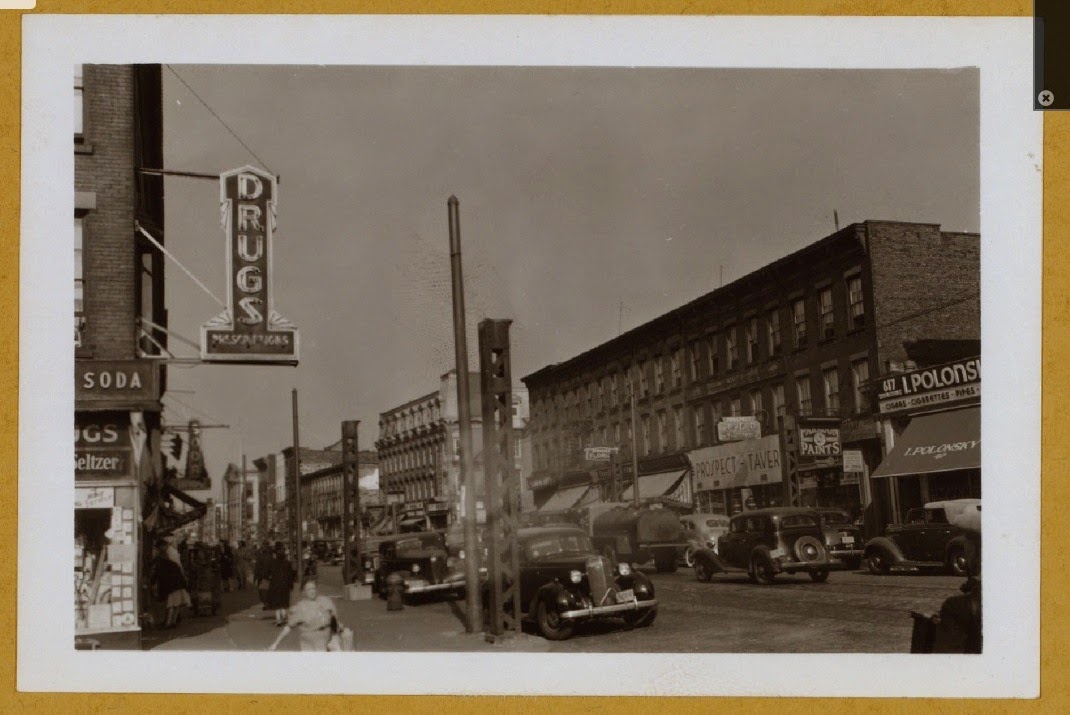 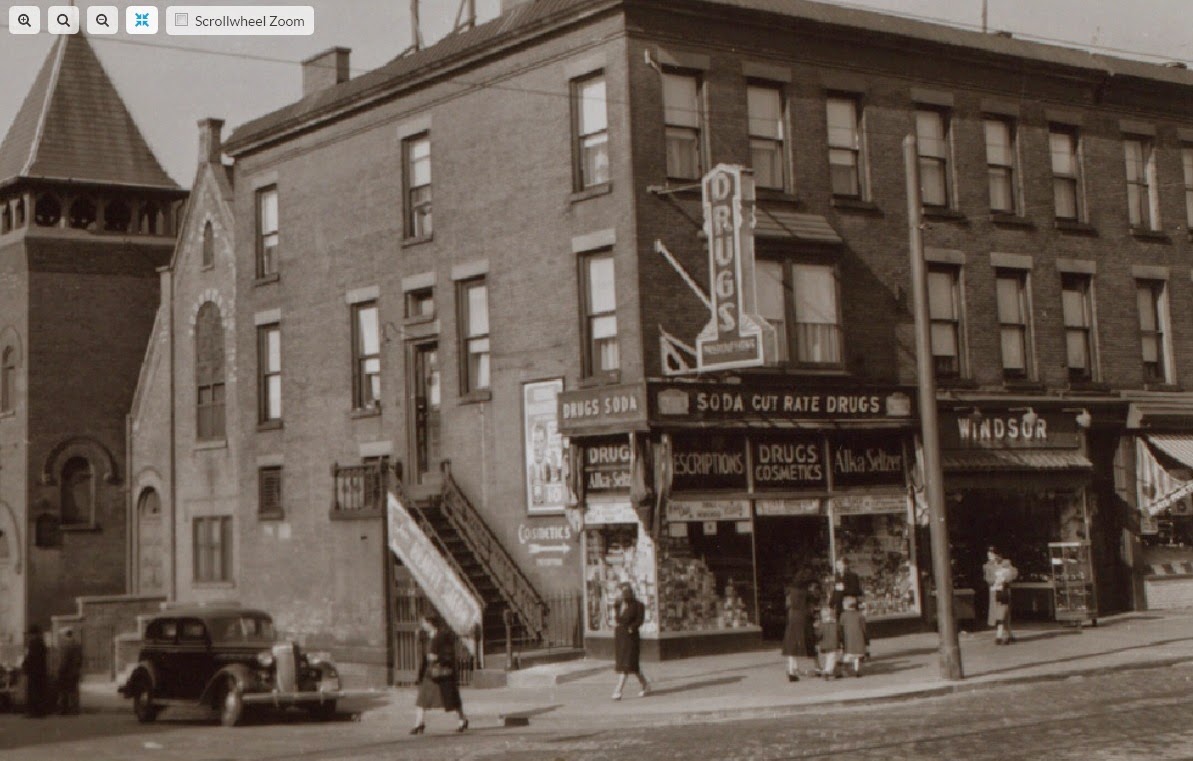 The neon enthusiast wonders:  could this relic be exhumed and restored, perhaps even re-lit for all to enjoy as one of the oldest surviving remnants of the early days of New York neon?  Could the bagel shop below live with a big sign outside advertising a drug store that no longer exists?  Would the odd newcomer or neighborhood outsider, erroneously lured here in search of Tylenol or toothpaste, be consoled in their frustration by the charm of such a unique landmark of the streetscape?  As we pause in contemplation, this rare heirloom of New York's ancient neon past remains forgotten, hidden in plain sight. 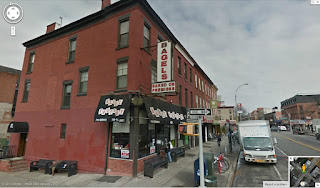 • Sad (if not surprising) news from Brooklyn: Hinch's of Bay Ridge has finally bitten the dust completely, the last of its neon gone - via the Brooklyn Eagle and ProjectNeon.
• Keep an eye out for upcoming events related to the release of James and Karla Murray's new book "Storefront II" - a continuation of their previous work by the same name.
• In Troy (upstate NY), a movement to preserve the signs of the late great South End Tavern.
• The Blu-Bell tolls its last: death for a neon motel in Colonie (New York).
• From the NYT, a romantic homage to the fading neon of Hong Kong.
• Cool news from this summer - a neon re-lighting at Evansville, Indiana's historic greyhound depot.
• In Baltimore, a garden of preserved signs.
• For the neon bookshelf, a really nice looking new book on Warsaw Neon by author Ilona Karwinska (who also gave us the book Polish Cold War Neon).
• From the typography department (not neon) - A design tribute to Jean Baptiste de Pian's "Alphabet Picturesque" of 1843.
• A fascinating gallery of 1970s Detroit signscapes by photographer Donn Thorson...
•  ...and a project to document and preserve Detroit's historic signage today.
• And last but certainly not least: great news from LA (Glendale), where the Museum of Neon Art is finally set to re-open in its permanent new home.