In the ever more rarified world of West Chelsea, Billymark's, at 29th and 10th, stands out as a refreshing oasis of genuine grime.  Any time I pass by this corner, I feel myself tense up with a certain anxiety:  so endangered are such places in New York today that Billymark's survival seems tenuous at best. 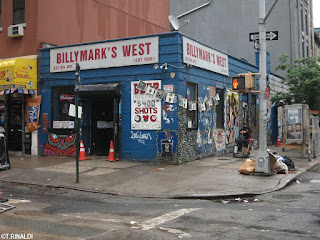 For those who haven't had the pleasure, Billymark's West (its full name - good luck finding Billymark's East) is the New York dive bar from central casting.  From its armageddon-proof terrazzo to its graffiti-sprawled bathroom with no toilet seat, there's nary a hint of affectation in its diveyness.

Yes, Billymark's seems to have all the trappings - with one great big exception:  no neon.  Along with a certain sense of disbelief that the place is still here at all, I note this lack of neon incredulously whenever I venture out this way.  The building itself, a humble one-story taxpayer with slightly art deco flourishes in its brickwork, cries out for some stylized contraption of midcentury letterforms wrought in stainless steel and neon, something a-la the Parkside Lounge down on Houston Street, or the now long-departed Penn Bar and Grill, formerly just a few blocks away.

One day not long ago, stuck at a red light outside Billymark's whilst on a noontime errand, I decided I'd finally get to the bottom of this by turning back the clock and seeing what this place looked like around 1980.  Such limited time travel is possible thanks to the Municipal Archives, which has made the city's 1980s tax photos available online.  The scans are fuzzy, but clear enough to reveal a pair of gorgeous neon raceway signs, their copy rendered in a classic neon script. 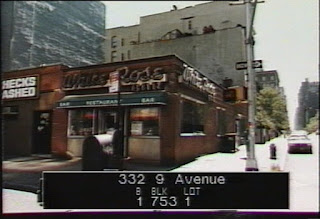 And - bonus discovery - the photo shows that before there was Billymark's, this corner belonged to one of the White Rose bars, a now-vanished varietal of New York neighborhood wateringhole along the lines of the Blarney Stones (now also nearly vanished - one of them recently shuttered just up the block from Billymark's).  White Rose bars turn up in the backdrop of old New York street scenes by photographers such as Andreas Feininger, Charles Cushman, W. Eugene Smith, and others. 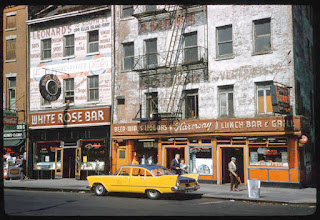 My fleamarket copy of the 1954 Manhattan yellow pages lists about ten White Rose bar-restaurants that year.  They're all gone now, but at Billymark's one can still listen the faint flicker echoing off the terrazzo - for now.  Gather ye white neon rosebuds. 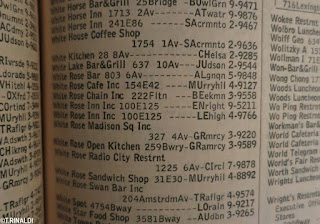 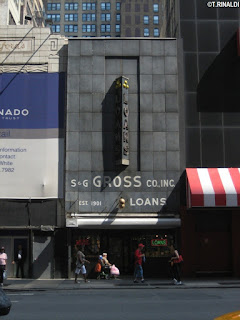 • Garment District neon, at Ephemeral New York.
• Some delightful DC neon via Shorpy.
• "Mapping New York City's Iconic Signs That Are No More" at Curbed.
• And finally we give you Kentile, inked. 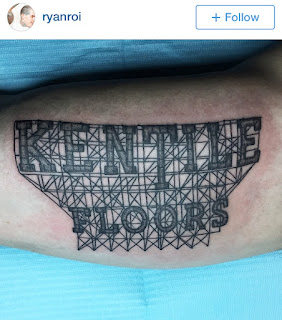 I am very excited to be lecturing this week with James and Karla Murray, photographers and authors of the landmark books "Store Front," "New York Nights" and most recently "Store Front II."

Please join us on Wednesday Evening (May 18, 2016) at the Lower East Side Preservation Initiative.  Here are the details:

WHAT:   Mom-and-Pop Storefronts and
the Art of Vernacular Design:
NYC's Lower East Side & Chinatown

Click here for more info.  Hope to see you there!

One of the happiest discoveries I made while researching New York Neon was running across a certain Charles J. Klein.  Identifying the designers of New York's old neon storefront signs was one of my main objectives in undertaking what became the New York Neon book.  But assigning authorship to the signs proved almost impossible.  Their design, I learned, typically belonged to artists from the sign painter's union.  Union sign painters often moved itinerantly from one sign shop to the next, leaving their work anonymously scattered around the city. 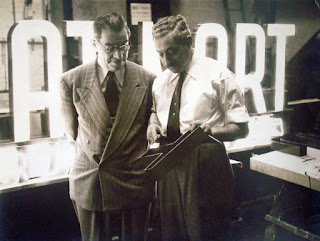 Charles Klein, right, poses with Murray Higger at the Silverescent Neon shop in Brooklyn, in front of a new sign for a photographer on Graham Avenue in Williamsburg, Brooklyn. (Courtesy of Phyllis Kramer)

Charles Klein was an exception, working steadily for the Silverescent Neon Sign Co. of Brooklyn during the 1950s and early 60s.  For all my research, Klein was just about the only designer I was able to definitively associate with any of the old signs I photographed for the book.  I first learned of Mr. Klein thanks to Al Higger, whose family ran Silverescent for decades. "Charlie was a great mentor for me and taught me a lot," he recalled. "The day prior to his death he took me to the local hospital to get my hand stitched.  I had a large cut on my finger, still have the scar."

Mr. Higger remembered Klein for having masterminded the distinctive letterforms and graphic compositions that characterized Silverescent's work in those years, and for having developed a kind of a formula for drug store signs such as that of Maiman's Pharmacy in Crown Heights, Brooklyn. 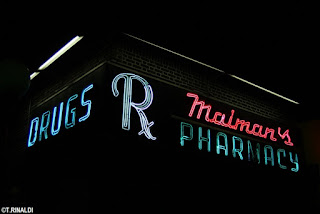 Maiman's unfortunately disappeared back in 2012, taking its old sign with it.  For its handsome letterforms, its appealing juxtaposition of three colors and its prominent location at the corner of Franklin Avenue and Eastern Parkway, Maiman's was a real favorite among fans of New York's old neon signs.  Eulogizing the sign here at the New York Neon blog, I was able to name Mr. Klein as its designer.  In a lucky turn of fate, Mr. Klein's surviving adult children discovered the post and sent me an e-mail.  His daughter Phyllis consented to an interview providing a biographical sketch of one of New York's otherwise largely anonymous midcentury sign designers. 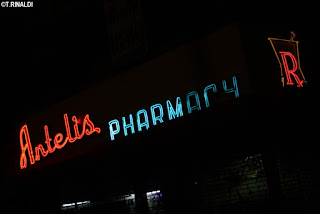 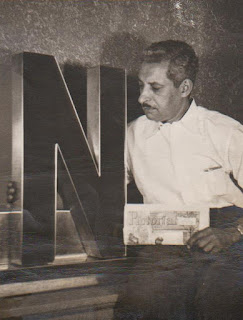 "He was proud of his work."  (Courtesy of Phyllis Kramer)

Like many in New York's sign business, Mr. Klein was the son of immigrants.  His father, Morris Klein, came to the US from Romania in the early 1900s.  An uncle, Jacob, was among those killed in the Triangle Shirtwaist fire in 1911, when Charles would have been just four years old. 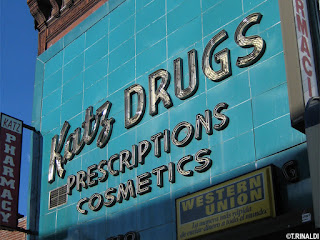 "Charles married Edna Nosoff in 1937," writes his daughter. "They had three children, Allen, Ira and myself, Phyllis. He spent most of his married life living in Boro Park Brooklyn. He attended High School in Bushwick, I think. There I believe he got training in drafting and possibly mechanical arts and probably sign painting, etc. Before WW2 he did some sign painting professionally. 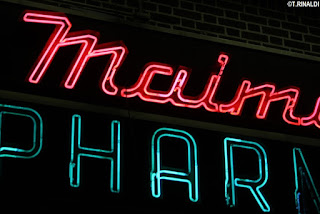 
"He did not serve in the Armed Forces. During WW2 he worked as an aeronautical engineer / draftsman for Republic Aviation in Farmingdale, Long Island. He was an essential part of the group that designed the P-47 bomber. At the American Airpower Museum (a fabulous place to visit, with retired flyers as guides) there is a photo of him and his group discussing the development of this plane. His love of flying started very young. We have photos and stories of him flying in the twenties, scaring his parents by flying overhead in an open biplane. 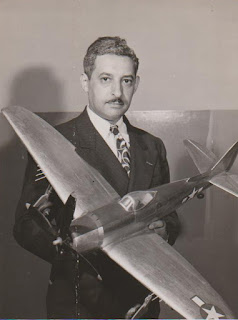 "After the War, he continued for a number of years at Republic as many planes were being converted from military to commercial use. Then in about 1948, the work at Republic ended and he went to work for Murray Higger at Silverescent Sign Company. I think he was originally hired as an electrician. But his obvious talents and artistic capabilities led him to become the chief designer there. He had a talent not just for drafting and design, but also for dealing with customers, sales and follow-up. 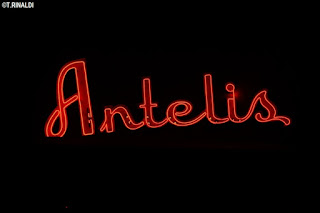 "Dad was always busy. He had many interests. There were the planes, always. Then in an unfinished attic room (we lived in the attic of an old three story walk-up that was really quite charming) he built a huge layout of first O gauge, and then HO gauge trains. With towns and mountains and all the adorable miniature trimmings. We all worked together on building it out of papier-mache and painting the scenery. My father would put together all the cars from kits, with all the decals on the boxcars, coal cars, flatbeds, and locomotives. I loved the caboose. 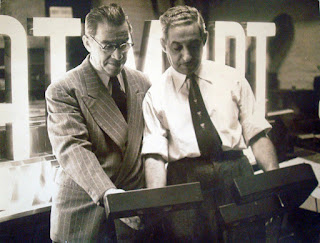 "Besides the planes and the trains, he built televisions from kits on the kitchen table. And repaired them too. He built a radio, turntable and stereo unit in the same way. Plus the cabinets to house them. He built beautiful pantry cabinets. I remember a particularly beautiful blue glass and chrome fold-away tray table that he designed. Boy, I wish I had that now. He repaired his own car.

"We had a porch on this top floor attic. Set among sloping roofs of green Spanish roofing tiles was a lovely aerie. He painted the waist high walls as trompe-l'oiel fieldstone and built a short wooden fence so his children wouldn't tumble over. Then at the sign shop, using sheet metal, he built flower boxes painted green. They ringed the edges. Every summer we had gorgeous flowers and roses spilling over, shaded by an awning and roll-up bamboo shades. He would sit for hours and cross-pollinate petunias to get new varieties. I got my love of botany and horticulture from him. He would take me on many weekends to the Brooklyn Botanic Gardens.

"He would also take Ira and I to Coney Island, most every Saturday in the summer. We got to choose five rides that we wanted to go on, and then we would go to Fabers arcade. I think that that was my favorite sign. 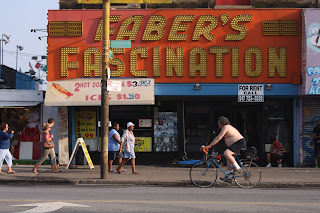 "I was 13 when he died. But he had a lasting impact on his children's careers. My oldest brother Allen became a leading set and costume designer for grand opera all over the world. My brother Ira became an electrical engineer and pursues interests in aeronautics. I became a textile designer, which I did for 35 years. We were all very influenced by my father's work, always having access as we grew up to art supplies, drafting equipment and that wonderful attic to mess up.

"As a child I gave him credit for every sign in NYC. He did point out certain signs that he had designed, and was proud of his work."  Work, happily, that has endured to be admired generations after his death.