After 15 years, the bell has tolled for the massive History Channel sign up in the Bronx, various sources reported last week.  As of this past Saturday, the big neon letters had all come down, the old incandescent "motograph" was dim and half dismantled, and just the network's giant "H" logo remained in place. 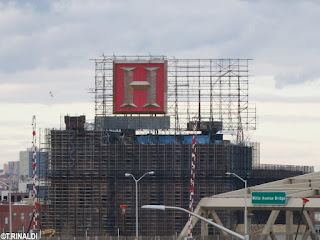 When this sign reared its head over this old Bronx warehouse  about 15 years ago, it struck me as somewhat ironic that such a historic form of advertising should be taken up by, of all things, the History Channel.  This was a neon "spectacular" in the classic style of those Times Square signs of yore, even if it lacked the animated bravado of its iconic ancestors.  Owing its existence to grandfather clauses in zoning codes that banned giant roof signs like this decades ago, its history stretches farther back than probably all but a very few of its admirers imagined. 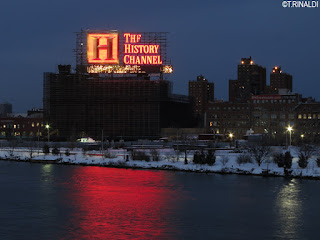 A few fun facts about the late History Channel sign: in addition to being very likely the largest neon sign in New York, it was one of the last works of the prolific Artkraft Strauss Sign Corp, renowned for having produced most of the 20th century Times Square spectaculars that remain etched in the retina of New York's collective memory.  The scrolling motograph that ran below the sign was a truly remarkable relic, a thing only slightly evolved from the first electric signs that appeared over Broadway in the 1890s.

And in fact, the sign's origins likely go back almost that far.  In a past life, the big brick building beneath it was an ice house for the brewing empire of Jacob Ruppert, the beer baron who also built Yankee Stadium.  Ruppert seems to have first installed a large electric roof sign here sometime in the early 1900s. 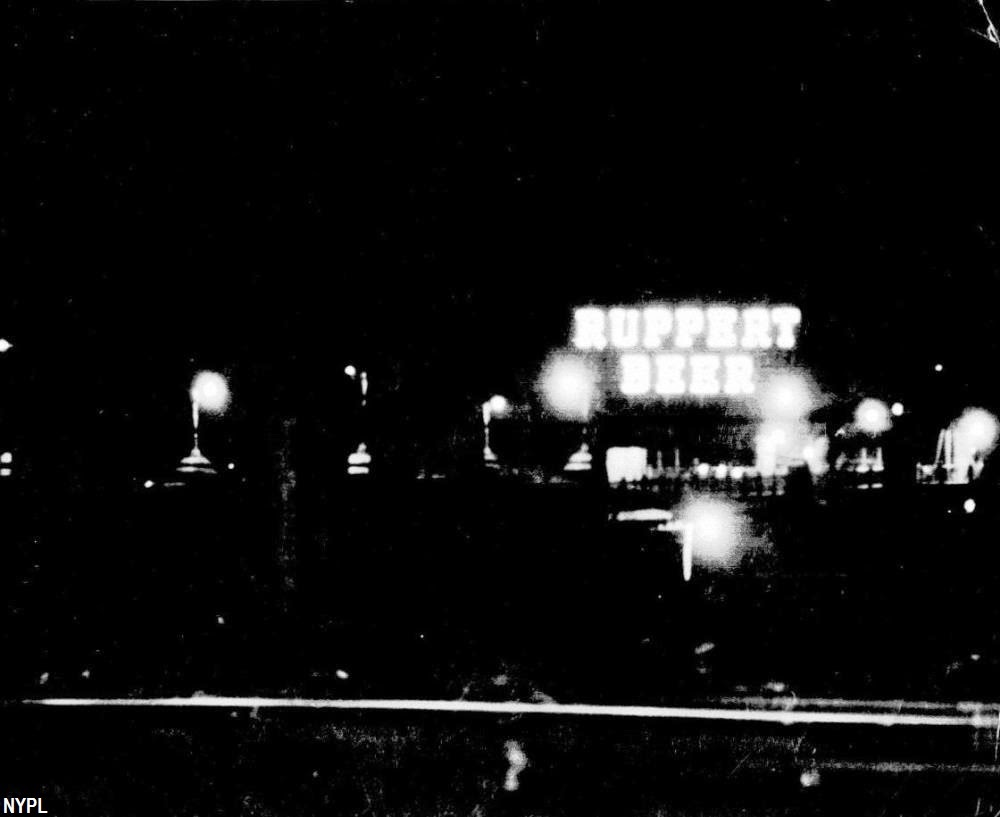 The old Ruppert sign shining out over the Willis Avenue bridge in the 1940s. (NYPL)

An old photograph preserved with the Artkraft Strauss papers at the New York Public Library shows what may be the first in a series of signs to occupy this perch over the past 100 years.   As traffic on the nearby Triborough bridge boomed after WWII, the Ruppert brewery cashed in on its location by hiring Artkraft Strauss to throw up a huge new spectacular advertising Knickerbocker Beer in 1952.  Trade publication Signs of the Times Magazine noted that the new installation replaced "the old Ruppert sign which had been a landmark in the Bronx for years."  Of the new sign, ST reported that "the letters are 40 feet high and extend 200 feet in length.  The spectacular employs 3-1/2 million candlepower and is said to be visible for 12 miles." 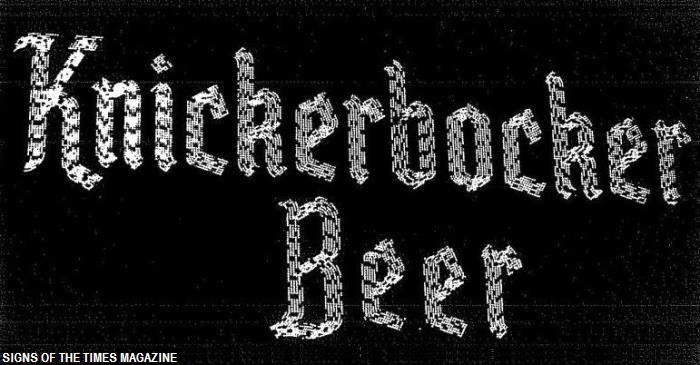 Ruppert's Knickerbocker spectacular was unveiled on August 20, 1952. (Signs of the Times Magazine, used with permission)

Ruppert eventually relinquished the space, leaving the sign to be reborn in 1962 with a new meganeon spectacular for Cities Service Oil (petroleonic predecessor to Citgo), which ST noted was visible to "an estimated 250,000 motorists a day."  Also erected by Artkraft Strauss, the sign flashed out the words "SEE AMERICA BY CAR" with candle power equal in intensity to a town of 10,000 people.  Cities Service in turn made way for a giant neon billboard for Kent Cigarettes, once again put up by Artkraft Strauss, which appeared in the mid-1970s. 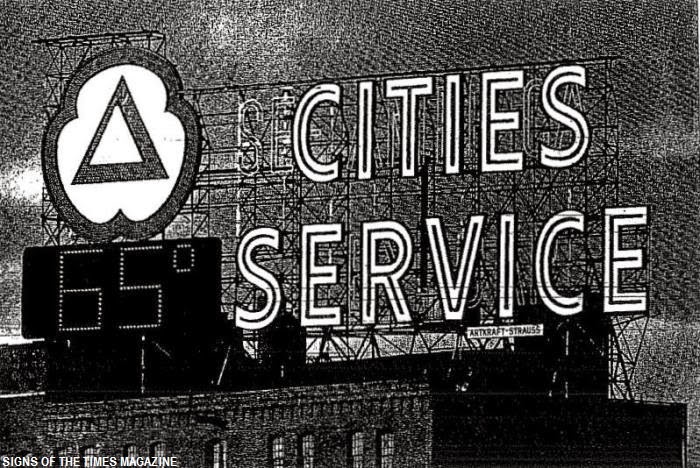 The Cities Service sign crowned the old Ruppert rooftop beginning in 1962. (Signs of the Times Magazine, used with permission) 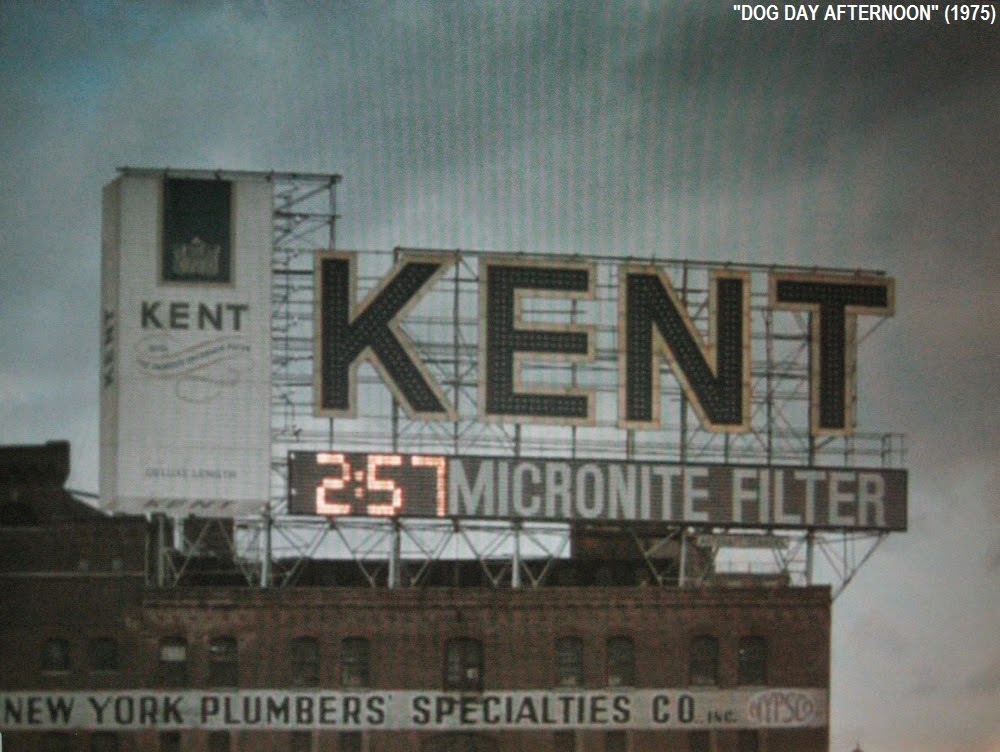 But the supreme incarnation of the old Ruppert roof sign, at least for my money, came in the early 1980s.  Happily, the songline of my childhood just happened to intersect with the golden age of this dark angel of the night, when the big sign peddled the menthol wares of the Lorillard Tobacco Company, known to the world as Newports. 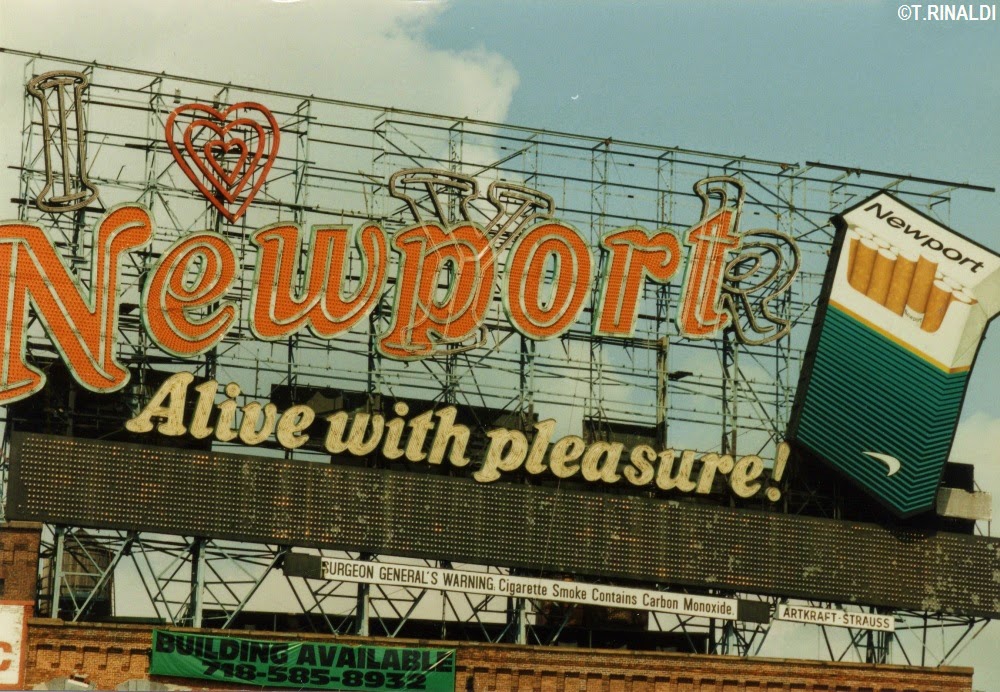 Long drives between visits to relatives in Brooklyn and our family's home in upstate New York were a feature of my childhood.  Cooped up in the back seat in those prehistoric days before the Nintendo Gameboy, that drive felt like an eternity, especially the trip back north, which took place under cover of night.  Yet in the depths of those long dark schleps, I knew I could count on one thing to stir my little heart: that glorious, tricolor monument to tobacco, hawking smokes with consummate flair and unabashed showmanship.  Like the Fourth-of-July-fireworks it cartwheeled over the traffic:

I / heart-heart-heart / NEWPORT!
ALIVE / WITH / PLEASURE!

This was the supreme highlight of those eternal nightrides, year after year, a sight that will dance through the dim recesses of my memory for as long as I live.  But nothing lasts forever.  In the late 90s, some killjoy do-gooders decided there was no place in the skyline for animated billboards peddling highly addictive carcinogens to the youth of America.  The Newport sign went the way of its beer, cigarette and gasoline-pushing predecessors around the year 2000.

A few years after the History Channel sign appeared here, Artkraft Strauss bailed out of the sign making business after more than 100 years.  Already, restrictive zoning ordinances had all but erased signs like these from the New York skyline, leaving the History Channel spectacular to stand out like a solitary neon dinosaur in an increasingly mundane nighttime cityscape. In the course of the sign's 15-year life, the big neon signs of Times Square and elsewhere have given way to giant LED billboards with all the character of supersized flatscreen TVs, completely devoid of the endearing mechanical acrobatics of their neon and incandescent ancestors. 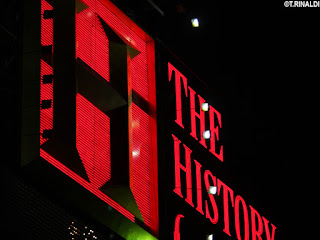 A long time ago, I had the idea that I would finish-off the New York Neon blog with a capstone tribute to the History Channel sign, an elegy plucked from the heartstrings in which this glow-in-the-dark landmark has been tangled up for as long as I can remember.  But now that the moment has come, I find myself not quite ready to put this blog to bed.  There's still enough left unwritten to keep this up a while longer.  Long enough, perhaps, to report on whatever the next chapter holds in store for the old Ruppert roof. 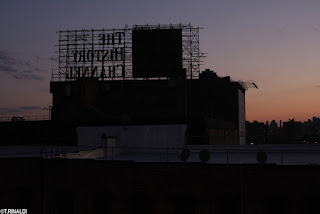 The Artkraft Strauss Records collection at the NYPL 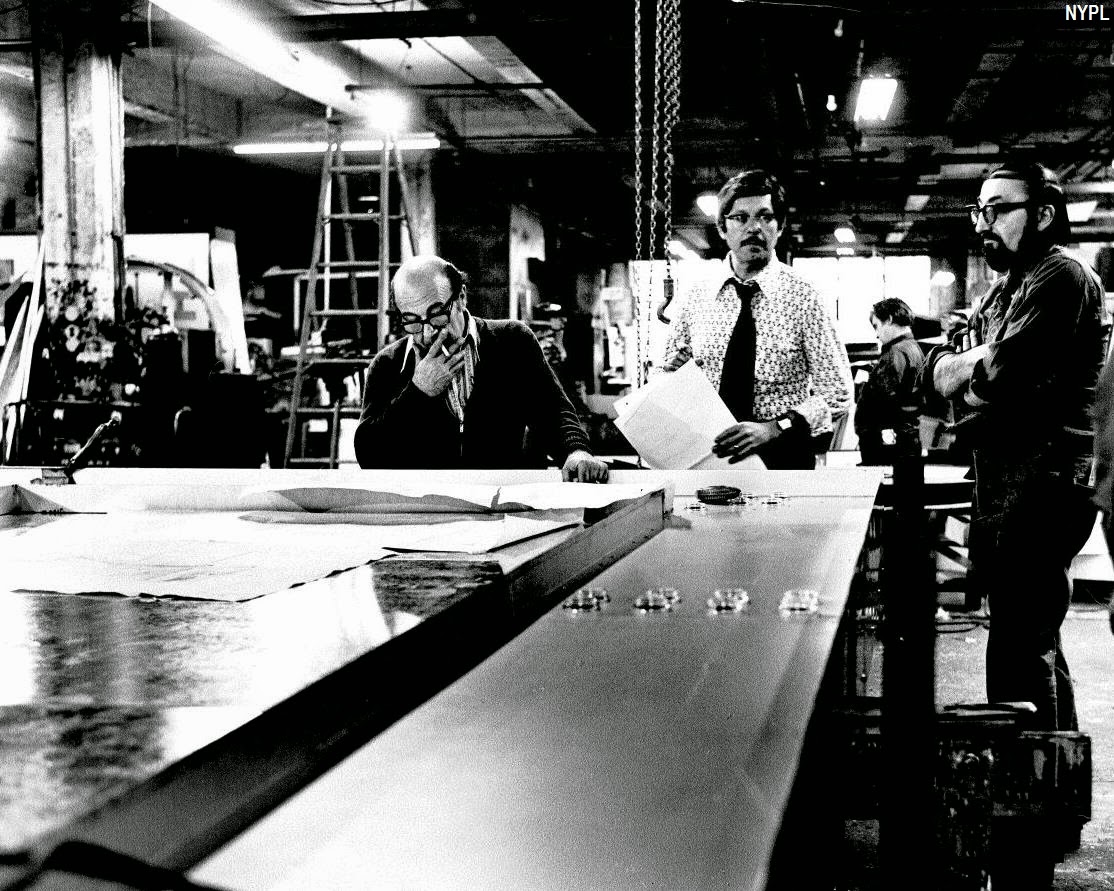 Fabricating the old Kent sign at the Artkraft Strauss shop in the 1970s.  (NYPL)

A late addition to December's "Lights Out 2015" post: dial CNN for Columbus Circle Neon No-more.  This recent feature over at the Shorpy blog reminded me that CNN's big neon spectacular over Columbus Circle vanished over the summer of 2015, as reported by the Daily News and Crain's New York. 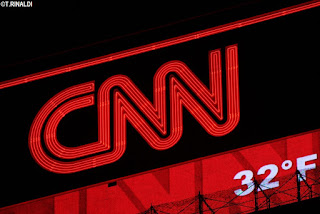 CNN has left its perch at Columbus Circle after 10 years. (T. Rinaldi)

Its replacement is a giant flatscreen jumbotron-type thing of the variety that have displaced most of the neon from Times Square in recent years. Though the CNN sign was only ten years old, it was descended from a series of roof signs that held down this perch for generations.  Its soulless replacement seems to mark the coup de grace in the desecration of the art deco skyscraper below.


• ProjectNeon reports that Riverside Liquors (previously profiled with this post) has been forced to take down its venerable neon sign, an Upper West Side survivor for more than 60 years. 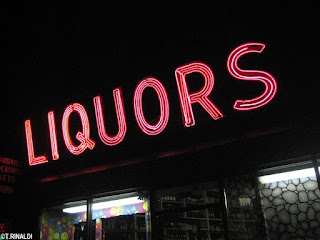 • Check out the work of John Baeder, chronicler of neon signs, whose book "John Baeder's Road Well Taken" came out late in 2015.
• In West Chelsea, be sure to stop by and admire the neon art of Deborah Kass at the Paul Kasmin Gallery (through Jan 23 2015).
• An oldie but a goodie: enjoy this 2010 tribute to the neon of New York's Capital District, from the All Over Albany blog (thanks to Rob Yasinsac for bringing this to my attention).
• If you haven't yet, listen in on the 99% Invisible podcast's recent "Tube Benders" episode.
• A project to preserve the historic neon of Boise, Idaho.
• Black Seed, a new cafe, has opened in the former DiRobertis Pasticceria space on First Ave in the East Village.
• Meanwhile, Jeremiah's Vanishing New York reports that the real DiRobertis' has actually been reborn, in Clifton, NJ. 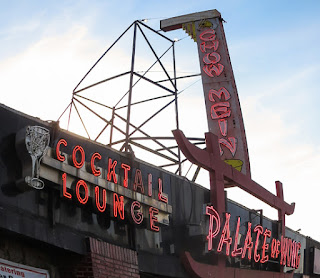 
• And finally, one of Long Island's most spectacular neon storefronts has gone dark with the closing of Rockville Center's venerable Palace of Wong late last year.