Sixteen stories over Broadway, the remnants of an old painted sign reading AMERICAN NEON are still faintly visible.  They cling to the side of a 21-story office tower at 989 Sixth Avenue, just above Herald Square, known as the Lefcourt Empire Building.  Handsome but rather non-descript, the Lefcourt Empire melds anonymously into the midtown skyline today.  But for a few years in the late 1920s, a giant neon beacon blazed out from its roof, making this one of the most prominent nocturnal landmarks in the city. 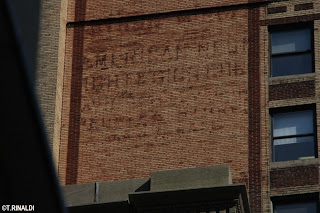 The big neon beacon made its appearance here as an advertising ploy for the American Neon Light & Sign Corp., which organized in 1927. Since the first practical neon signs appeared in the United States in 1923, one company – Claude Neon – had sought to control the neon business by way of patent litigation.  By the late 1920s, however, Claude began to lose its grip on the industry.  American Neon was one of Claude’s first serious challengers.

The company’s backers included A.E. Lefcourt, a prominent real estate developer.  "All but forgotten today," says Wikipedia,  "in his lifetime Lefcourt was known as one of the city's most prolific developers of Art Deco buildings." Keying into the growing fascination with developments in aviation, Lefcourt offered American Neon the roof of the Lefcourt Empire for the construction of a neon "airport signal" intended guide aircraft towards New York from as far as 100 miles away.  To light the beacon, the company brought in Clarence Chamberlin – pilot of the second successful Transatlantic flight (completed in June 1927, just two weeks after Lindbergh) – who flipped the ceremonial switch. "Special provisions have been made for the flashing of any and all code signals on any specific occasion," reported Signs of the Times magazine in August 1928. 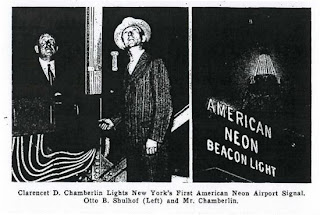 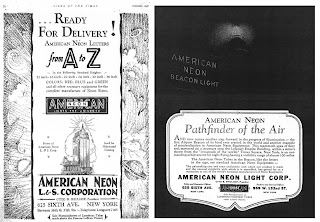 
By appearances, American Neon could hardly have picked a better time to enter the neon business. The years 1927 and 1928 saw neon signs sweep the country in the way LED signs seem to be doing today.  But somehow, things went awry.  Sure enough, the company became embroiled in costly patent litigation – the so-called “neon war” of the late 1920s.  Then came Black Tuesday.  Claude’s crucial patents expired in 1932, but it was too late for American Neon, which declared bankruptcy in 1930. 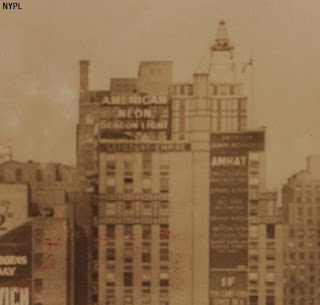 In the years that followed, American Neon and everything it touched faded into obscurity.  Lefcourt’s real estate empire fell apart during the depression:  he died of a heart attack in 1932, just 55 years of age, leaving behind a small army of frustrated creditors.  While Lindbergh remained a household name for decades, Clarence Chamberlin wound up selling real estate in Connecticut, where he died in 1976.  And once the beacon light went dark, the Lefcourt Empire Building receded into the cityscape, as taller towers rose around it.  Satellite photos reveal no trace of the beacon on its roof today.  But the faded letters remain, a haunting reminder of headier days. 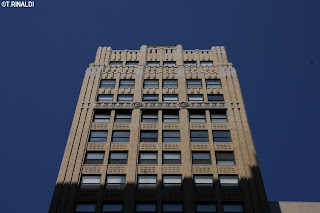 
(More background on American Neon can be found at the fantastic web site 14to42.net.)
Posted by T.E. Rinaldi at 3:17 PM