Lights Out 2019: Signs We Lost This Year

I'm a little behind the ball in getting out 2019's list of vanished signs. Better late than never, as I like to say. (To which my high school history teacher would answer "better never late.")  Here I must add the usual caveat that this listing isn't strictly limited to signs that disappeared in 2019, but to signs that I noticed had disappeared during the year - In other words, some may have vanished earlier.  With that, let's begin our dirge. 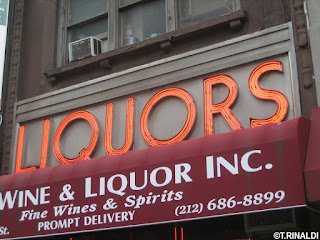 J&L Liquors, 34th Street, Manhattan
This age-old midtown liquor emporium lost its fantastic Futura-esque neon lettering to LED-lit knockoffs that more or less approximated their predecessors.  The liquor store survives, but the sign has now been completely replaced with a new backlit panel contraption leaving not the slightest suggestion of anything special ever having come before. 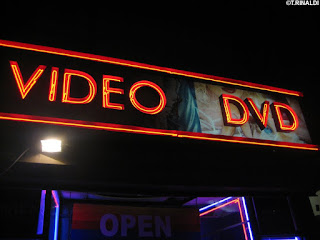 Xcellent DVD, 515 6th Ave., Manhattan
This outpost of old-world smut survives on 6th Ave just below 14th Street, but it has kissed its neon goodbye in favor of more el-blando LED crap. 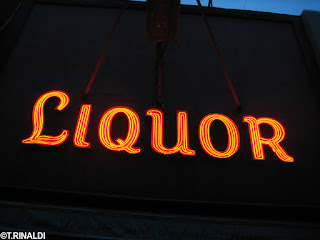 Jolson's Liquors, 22-24 31st St., Astoria, Queens
Beaming out from under the elevated, Jolson's extra-likable variant of the classic neon LIQUOR storefront seemed to be here for the long haul, with those jaunty letters rendered in four strokes of flawless red neon.  Sadly Jolson's has yielded this storefront to a new Taco Bell franchise. 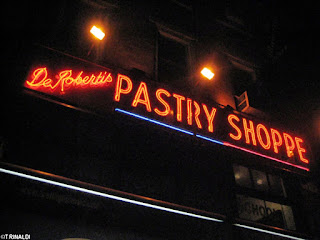 DeRobertis Pasticceria, 176 First Av., Manhattan
DeRobertis packed up a few years ago but left its old sign behind as a reminder of this pasticceria's 110-year tenure here on Manhattan's east side.  Alas, the sign has now followed the business into oblivion. 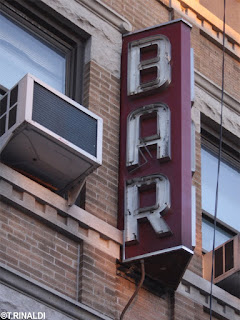 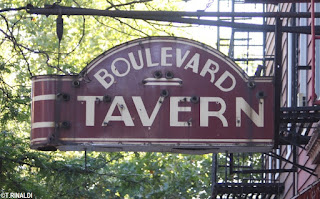 Boulevard Tavern, 575 Meeker Av., Williamsburg, Brooklyn
Williamsburg's Boulevard Tavern vanished back in 2015 and its fantastic, pre-WWII-era sign has now disappeared too.  A plywood placard advertising a new bar hangs in its place. 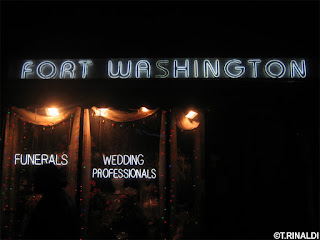 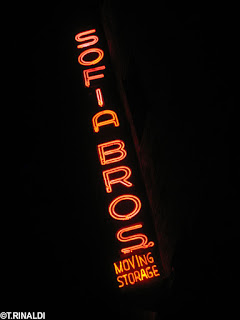 Sofia Bros Moving, 4396 Broadway, Washington Heights, Manhattan
Way-on-away-uptown, this splash of redletter neon brightened the unadorned facade of an old brick storage warehouse on the upper reaches of Broadway.  The building and the business both survive, but that old brick facade is unadorned now. 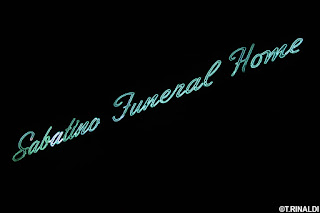 Sabatino Funeral Home, 321 Avenue U, Gravesend, Brooklyn
Sabatino's is still with us and so is one of its matched pair of signs, which formerly faced both directions down Avenue U in Gravesend, Brooklyn.  One of the twin signs has disappeared to make way for new construction on the lot next door.  Some of the very finest script lettering in town. 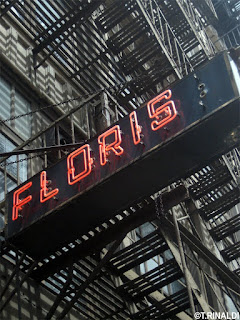 Langdon Florist, 62 Reade St., Manhattan
After 71 years in business, Tribeca's Langdon Florist packed up and moved out to Staten Island in 2018, taking its neon with it.  The restored sign now hangs inside their new showroom at the corner Victory Blvd and Clove Road.  Langdon's old Manhattan storefront remains empty at last check. 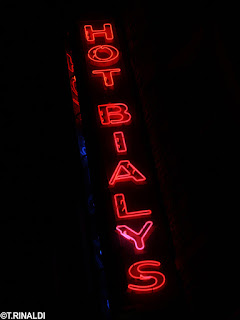 Coney Island Bialy Bakery, 2359 Coney Island Av., Brooklyn
After a near death experience back in 2011, New York's oldest bialy shop finally bit the dust for good circa 2016, yielding its storefront to an offbrand cell phone shop. 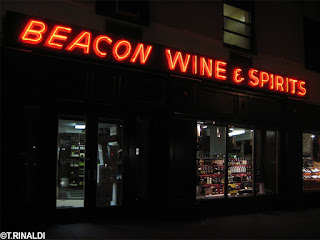 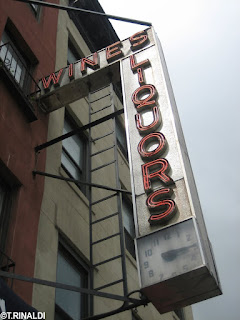 IC Liquors, 2255 First Av., Manhattan
Veteran East Harlem liquor purveyor IC Liquors has moved from its longtime home near the corner of First Ave and East 116th Street, leaving this fabulous old vertical sign orphaned.  Sign still there at last check but the future is not bright for this uptown commercial landmark. 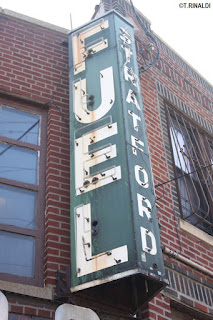 Stratford Fuel, 1162 East Tremont Av., Bronx
Though I never saw it lit, I loved the idea of a neon sign beaming the simple word FUEL out into the nocturnal East Tremont landscape.  Sad to report, this circa-1952 product of the Grauer Sign Co no longer figures into the daytime streetscape either, having vanished sometime after its last Google Streetview cameo in 2015. 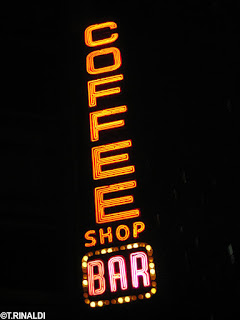 Union Square Coffee Shop, 29 Union Sq. West, Manhattan
And finally ... 2019's most noteworthy neon casualty was one of everyone's favorites: the almost-famous Coffee Shop sign on Union Square.  Here since 1960, the sign survived at least three incarnations of the restaurant it advertised, until the place finally went belly-up in the face of another rent hike in 2018.  When news broke that a Chase bank would take over the space, some of us withheld our eye-rolls in hopes that the sign might somehow survive. No such luck:  Chase replaced it with a fake-neon LED sign that as a tribute to its predecessor is truly worse than nothing. You may now proceed with your eye-rolling.
Posted by T.E. Rinaldi at 5:23 AM No comments: