The MONY weather beacon has been LED-ed.  I noticed it the other night, while running across Broadway in the rain, late for a dinner date.  The familiar old incandescent bulbs that told the time and temperature and zipped up the mast above are gone, together with the red neon glow in the star-shaped finial, all replaced with bright amber LEDs.  The change seems to have taken place over the summer. 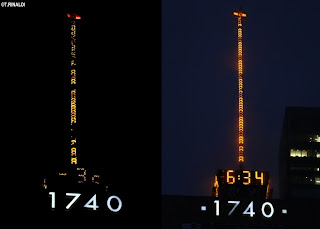 MONY versus MONY, before and after. (T. Rinaldi)

Truth be told, the old weather beacon had begun to look a little sad of late.  Its codified weather signals hadn't worked in years, and the only thing you could count on seeing up there was a patchwork of burned out bulbs.  It's looking healthier now, if a bit sterile. 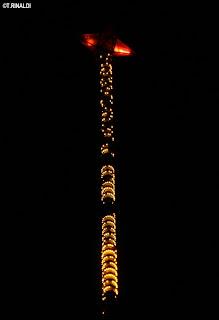 More properly known as the Mutual Life "Skymark" or "Weather Star", the installation first appeared in 1950, perched atop the new headquarters building of the Mutual Life Insurance Company of New York at Broadway and West 55th Street.  Conceived by famed Times Square sign man Douglas Leigh (1907-1999) and fabricated by the Artkraft Strauss Sign Corp., the Weather Star was produced by the same team responsible for virtually all of Times Square’s midcentury neon spectaculars, including the puffing Camel Cigarettes sign.  It was originally accompanied by a large neon sign reading MUTUAL LIFE in gold neon mounted to the parapet wall below the beacon.  The sign was later re-lettered "Mutual Of New York", then simply "MONY".  A re-hashed MONY sign appeared in 1998, which finally made way for the existing LED-powered "1740", installed in 2008 after the insurance company disappeared into an alphabet soup of mergers and acquisitions (MONY is now part of AXA S.A.). 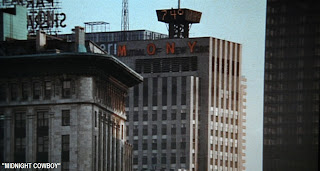 The Weather Star c. 1968, in a frame enlargement from "Midnight Cowboy."

The Weather Star meanwhile remained largely unchanged through the years (apart from some minor improvements made in 1965), outliving all of its Times Square cousins.  As originally programmed, the 4,200 bulbs on its 150-foot mast zipped up to indicate rising temperatures, down if the forecast called for cooler weather, and remained static if no change was predicted.  The star changed from green to orange to white to indicate fair or cloudy skies, rain or snow. 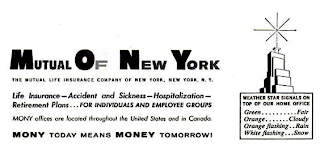 MONY used the weatherbeacon as a corporate logotype in its advertising during the 1950s and 60s. (Life Magazine, June 24, 1957)

Similar weather beacons appeared in other cities (MONY has a cousin at the Mutual Life building in Syracuse; Wikipedia counts more than 70 around the world).  But the Weather Star was New York's own. "From my office, I could look across town to the weather signal on the Mutual of New York Building," wrote Joan Didion in Goodbye to All That: "that pleased me obscurely."  Tommy James cited the display as the inspiration for the 1968 hit "Mony Mony": "It's almost as if God Himself had said, 'Here's the title.' I've always thought that if I had looked the other way, it might have been called 'Hotel Taft.'" The beacon had a bit part in John Schlesinger’s 1969 film Midnight Cowboy, backing up a questionable scrabble move by the hapless Joe Buck.  When MONY briefly dimmed the beacon in 1979 in an attempt to save an estimated $50,000 annually on its upkeep, a small outcry convinced the company to turn the lights back on. 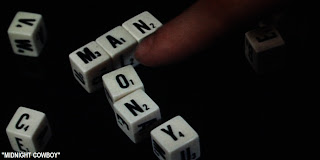 My gut reaction to the Weather Star's LED-ification came as a pang of nostalgic lament for the old incandescent bulbs.  It looks just a little too uniform, especially with the star in the same orangey LED hue as the rest of it.  But consider the alternative: the building is not Landmarked, and its owner – Vornado Realty Trust – could just as easily have taken the thing down altogether.  Much as I am invariably saddened by the loss of superannuated technology, it's nice to see new life breathed into the old girl.  Now if only they could bring back the beacon's animated, color-coded forecasting scheme so those of us without smartphones might once again get our weather on the fly . . .

from Signs of the Times magazine, January 1951: