A subtle decal can be found pasted inconspicuously onto the sheet metal faces of many old neon signs in New York.  It is a small rectangle, maybe one inch across and three inches high, bearing the letters “U-M” with a tiny numeral in between.  Photographing the signs at night, I didn’t notice these little guys at first.  Even once they caught my eye, the U-M stickers didn’t really grab my curiosity.  Finally it dawned on me that there might be something to these.  I began to ask around. 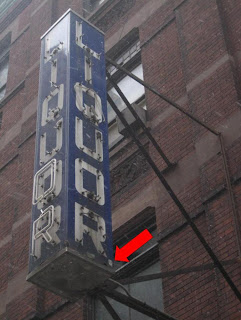 This maker of this fantastic relic sign on 6th Avenue in Manhattan can be identified only as "union sign shop no. 14." (T. Rinaldi)

Remarkably, everyone I talked to in the neon business was as mystified as I was as to the meaning of these decals.  Even second generation veterans of the New York sign business just shrugged their shoulders.  It took months before I finally found someone who confirmed what I had begun to suspect:  U-M = "Union Made" or "Union Manufactured."  Not all sign shops used the stickers, but they can be found on many signs made from the late 1940s up through the 1970s. But what about the little numeric code between the letters?  It took a while longer to get an answer for that one. 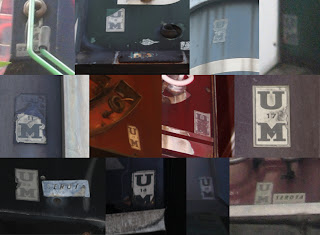 "Union Made" decals on old neon signs around New York. (T. Rinaldi)
Labor unions have played a prominent role in New York’s electric sign business since at least the 1930s.  Just about every neon shop of any size in the city employed union labor by the postwar years.  And the staff at a typical New York shop would include members of not one, not two but three unions: Local 230 of the the Sign Pictorial & Display Union, Local 137 of the Sheet Metal Workers International Association and Local 3 of the International Brotherhood of Electrical Workers. 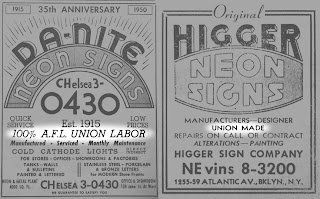 Display advertisements from old Manhattan telephone directories. (N-YHS)
It turns out that the numeric codes between the U and the M correlate to various sign companies.  Suddenly, these little stickers took on a huge significance - If I could figure out which number indicated which sign shop, I could identify the makers of every sign that had one of these labels!  Problem is, the Rosetta Stone keying the U-M numbers to their respective shops has yet to turn up.  And many of the numbers have become too faded to read even with binoculars.  For now, all I can say is that the great old P&G Bar sign and the J. Braun Liquor Store sign are both the work of shop no. 17, and shop no. 11 made both the Olympia Florist sign in Hamilton Heights and the S.M. Rose Chevrolet sign on Fordham Road in the Bronx. Does anyone out there know more?  Meantime, I have thrown together this handy list of signs organized by their U-M codes.
Posted by T.E. Rinaldi at 9:06 AM No comments:

Anyone reading this has surely already heard about Kirsten Hively and Project Neon, but, just in case you missed it - stop by her show opening tonight (Friday Sept 23, 2011) at the City Reliquary!

http://www.cityreliquary.org/
Posted by T.E. Rinaldi at 10:10 AM No comments:

My apologies for the month of “radio silence” on this blog.  My energies have gone toward edits to the neon book, which is now back at the publisher for another go-around.

I thought I’d break the silence with a little tribute to a sign I never got to see (at least I don't remember it): that of the Railway Bar, which stood on 8th Avenue just below Penn Station.  I came across this while surfing through the archive of NYC tax photos taken in 1980, housed at the Municipal Archives.  What can I say, love at first sight.  This looks like a place for people who knew how to have a good time. 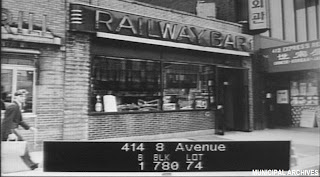 
The Railway Bar is long gone now – a Google search turns up almost nothing, nada, bupkis, zippo.  The only other trace I could find was in one of Matt Weber’s great photo-montages of New York neon from days past.  A liquor store occupies the space now (thankfully it’s not a Starbucks or an ATM depot, though that’s probably a matter of time). 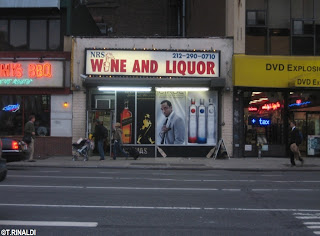 The photos show that the sign had red tubes in stainless steel channel letters set against a backdrop of green porcelain enamel, with nice stainless steel stripe moldings to each side.  Records at the DOB suggest an installation date in 1947. 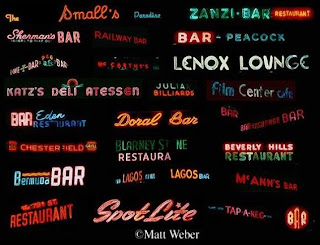 Sign montage by Matt Weber, showing the Railway Bar at 2nd row center, just below Small's.  All but two of the signs pictured here have vanished.
There is still a nice amount of tenderloin grit on this stretch of 8th Avenue, which I enjoy any time I make the schlep between my apartment and Penn Station.   Some good neon survives here, too.  The Penn Bar & Grill on the corner of 31st and 8th made way for Brother Jimmy’s a number of years back, but the new place did a good turn and installed a decent neon sign in place of the old one. 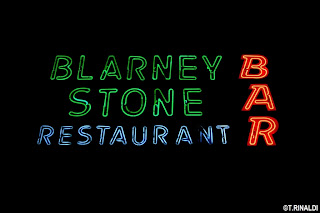 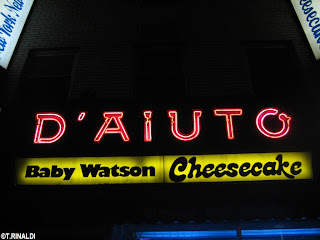 The Blarney Stone and D'Aiuto Pastry Shop.
Just down the street, the 8th Avenue Blarney Stone still has a great sign, even if the bar inside looks nothing like it did in the old days.  And over across the street there’s still D’Aiuto, whose sign went up in the days when you could have grabbed a snack here and caught the Broadway Limited to Chicago in the late, great Pennsylvania Station.

Choo-choo and RIP, Railway Bar!  If anyone has any memories of this place, feel free to drop me a line. 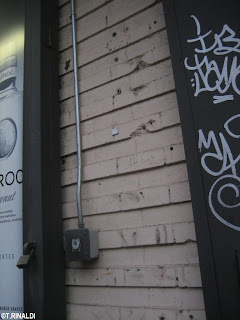 Nice deco brickwork on the facade of the ex-Railway Bar.
Posted by T.E. Rinaldi at 1:46 PM No comments: