As previously reported, the Subway Inn (at 60th and Lex in Manhattan) is set to close later this month.  The entire corner is to be cleared to make way for redevelopment, reportedly a luxury residential tower.  But the bar isn't going without a fight:  Its owners have launched a petition and are taking donations for legal expenses in a last ditch attempt to survive.  Follow this link to learn more about how you can support the Subway Inn. 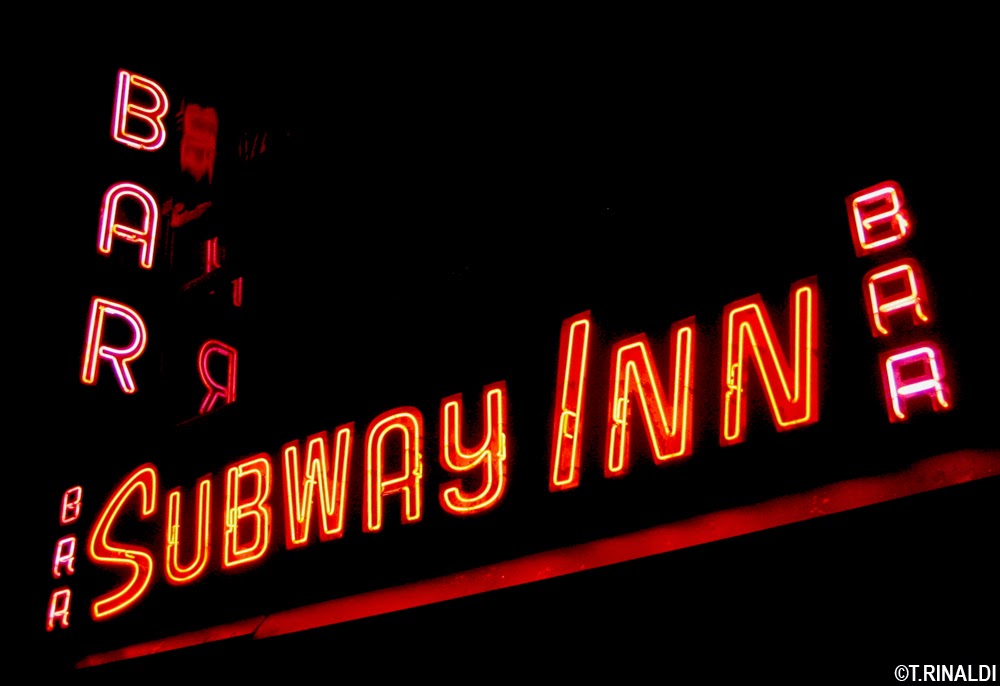 Background: the Subway Inn is a blue-collar watering hole that has been around for nearly 80 years.  The pair of neon signs over its storefront dates to the 1940s-50s.  Uniquely appealing among the few such signs that survive in New York today, they mark this as an establishment where little has changed over the years. 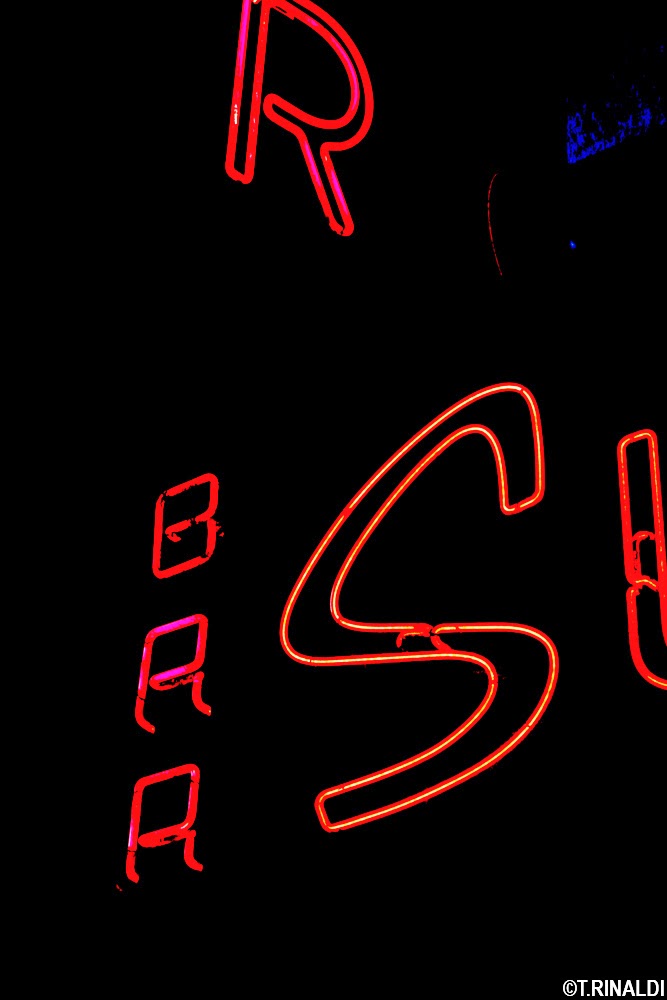 In the face of the aforementioned megadevelopment slated for this corner, the future appears very bleak indeed for the bar and its signs.  The management could attempt to relocate, but taking the signs with them is a costly proposition.   Perhaps a better alternative would be for the bar's landlord to reserve a spot for it in whatever new building takes shape here (at an affordable rent), though this would require the business to close or relocate for a prolonged period before moving back in, something that has been tried and failed before (read Mars Bar). 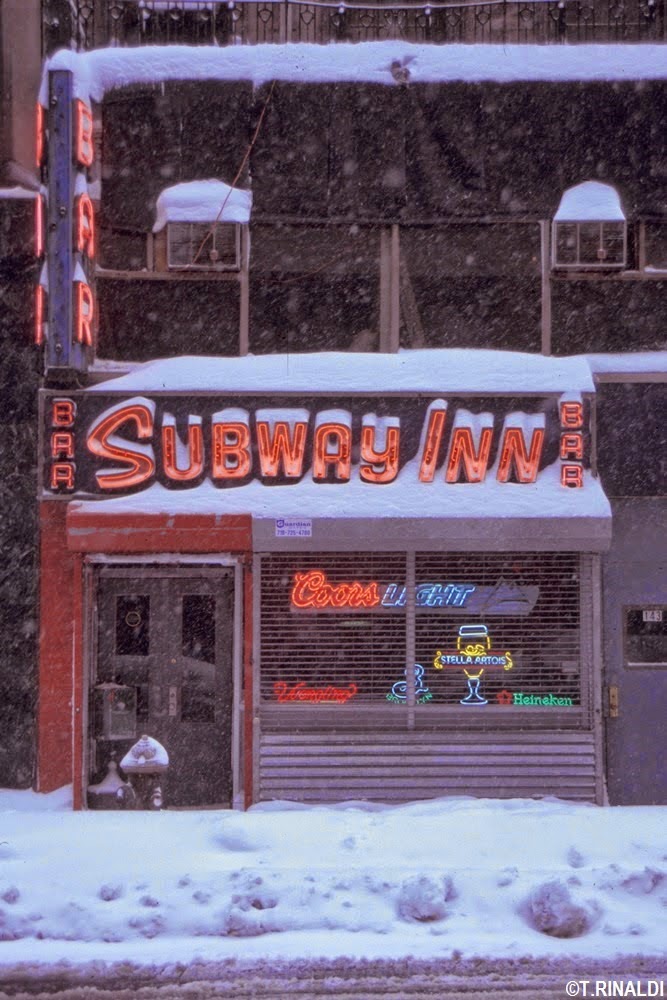 On a personal note, the Subway Inn was a point of entry and a favorite hangout when I first moved to New York a decade ago.  Even then, it stood out as a relic of a time when Manhattan was more accessible to what we now call the 99-percent, when a middle income family could plausibly live within walking distance of 60th and Lex - something essentially unthinkable now.  I loved rounding the corner from Park or Madison onto 60th Street, high rent district all around, and seeing that neon BAR sign still aglow down the street. 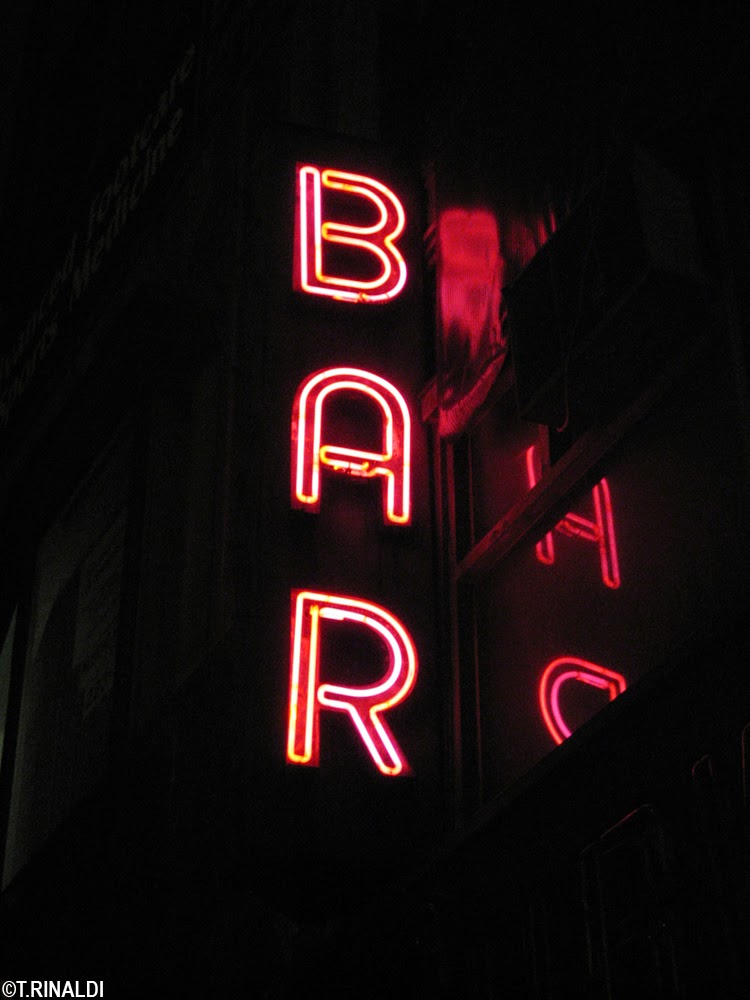 Neon storefronts like this were once a dime a dozen in New York.  We celebrate the few that survive today because change has rendered them unique.  We bemoan their loss not just because they're old, but because their disappearance signals New York's transition into a city whose center is growing ever farther beyond the economic reach of the working class.

SEE ALSO:
• Support the Subway Inn by purchasing prints over at Project Neon.

IN OTHER NEON NEWS:
• There are still a few slots open for my Neon Walking Tour of the East Village this Friday!  The tour starts at 7pm this Friday, Aug. 15.  Reservations required; you can book here.
Posted by T.E. Rinaldi at 5:55 AM 1 comment:

The best part about maintaining this blog is when e-mails come in from people with real connections to the signs I've sought out and photographed for the neon book.  The latest of these comes from Amy Radin, whose father, Harold Friedman, is known to admirers of New York's old neon signs for the "Harold's for PRESCRIPTIONS" sign, on McDonald Avenue in Gravesend, Brooklyn. 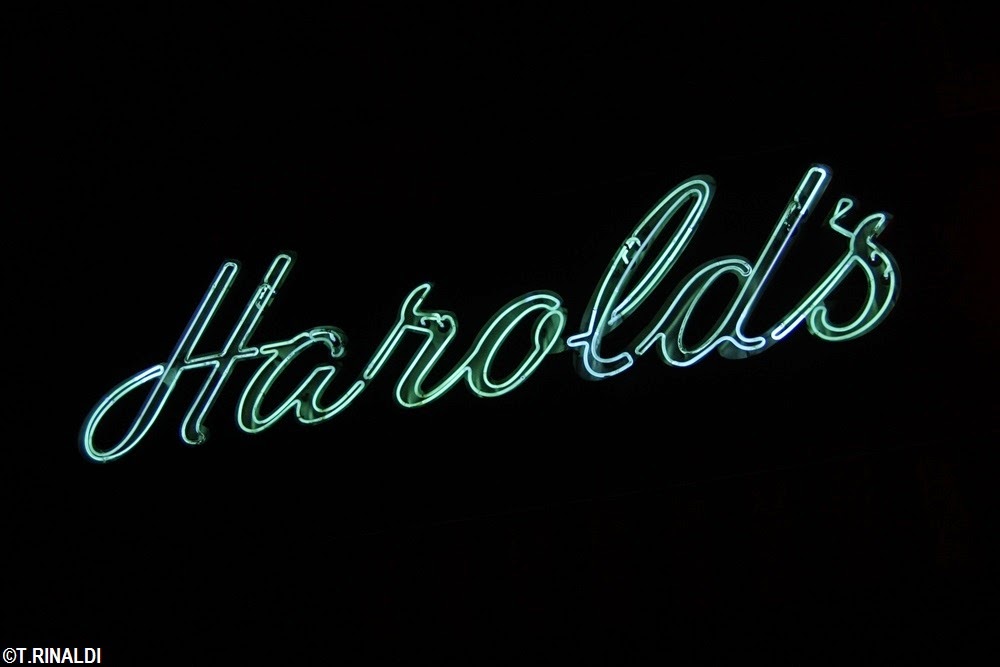 As is often the case, there is a story behind the neon here, one that the sign does not speak to.  "He was the first Jewish merchant in a solidly blue collar Italian part of Brooklyn," Ms. Radin recalls of her father:  "Apparently it was not easy at first." 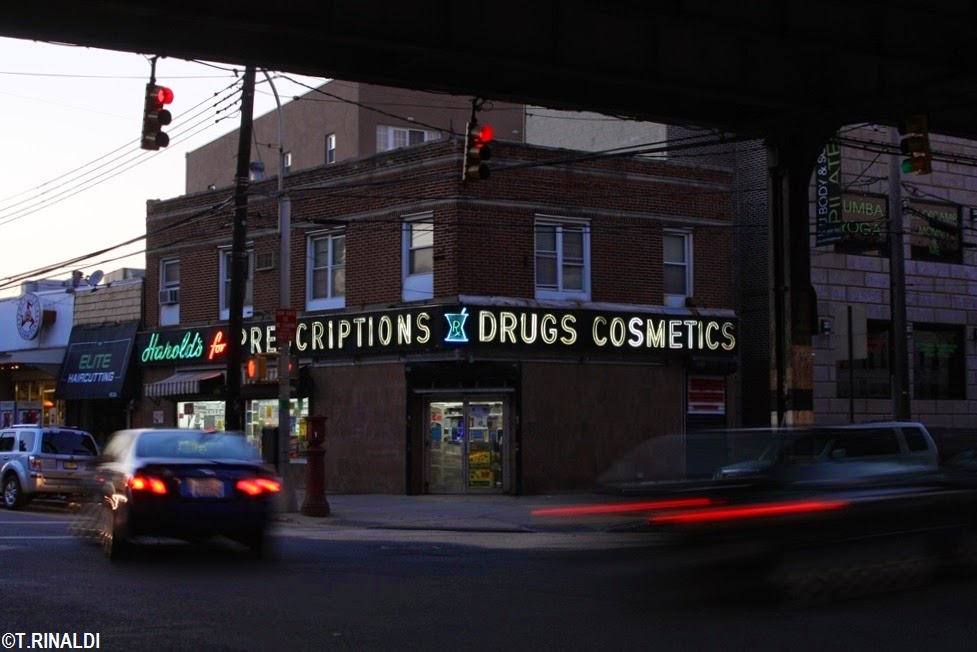 "My dad, Harold Friedman, was born September 9, 1929 and grew up on the edge of Manhattan Beach, Brooklyn. His parents owned Chiffon Bakery, a kosher bakery on Coney Island Avenue near Avenue J which was around at least into the 1990s.  Oriented by his parents towards a career in retail, he went to St. Johns College of Pharmacy (I think he really wanted to be a doctor)," writes Ms. Radin.  "In 1955, around the time that my parents had their first child, he struck a deal to buy Barrata's Pharmacy," an Italian-owned corner drug store in the shadow of the Culver Viaduct at Avenue U and McDonald in Gravesend. 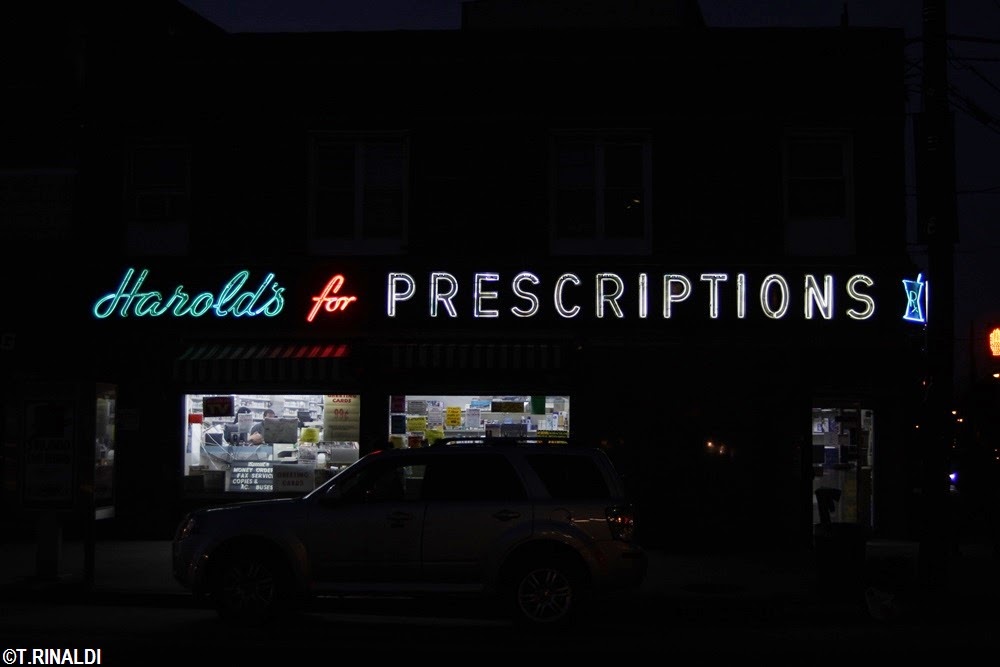 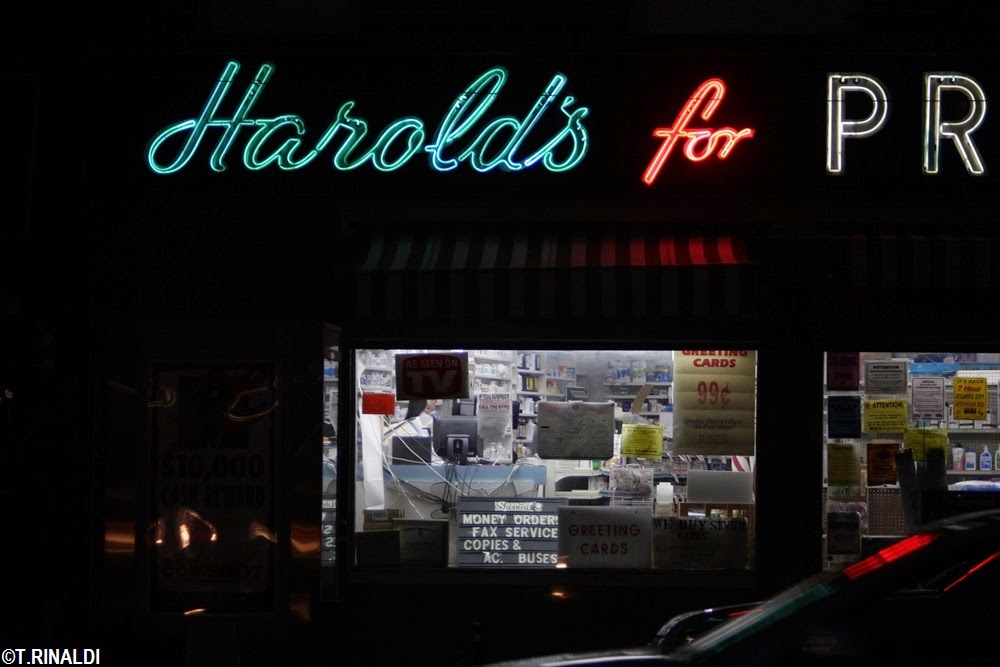 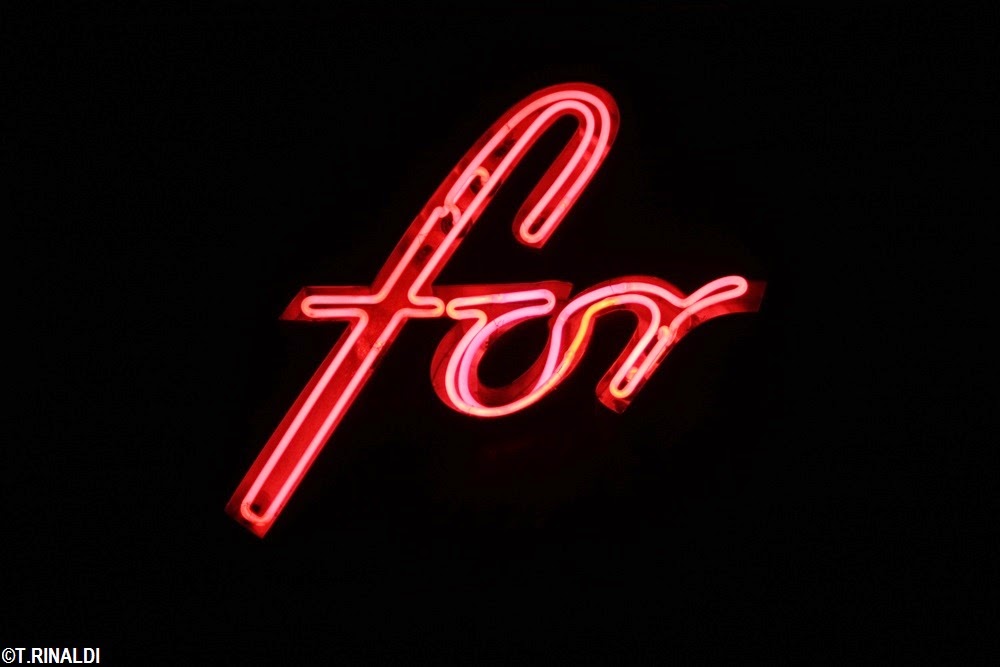 "There was a 'buy Italian' message circulating around the neighborhood," writes Ms. Radin.  Wary of making waves, Harold Friedman waited a few years before re-naming the business and updating the sign.  "Harold eventually overcame whatever these attitudes were and became a real neighborhood fixture.  When he got comfortable that he was sufficiently established (probably around 1957) he updated the sign to its current wording.  He kept the original style - the script lettering - of the Barrata's Pharmacy sign, according to my mom." 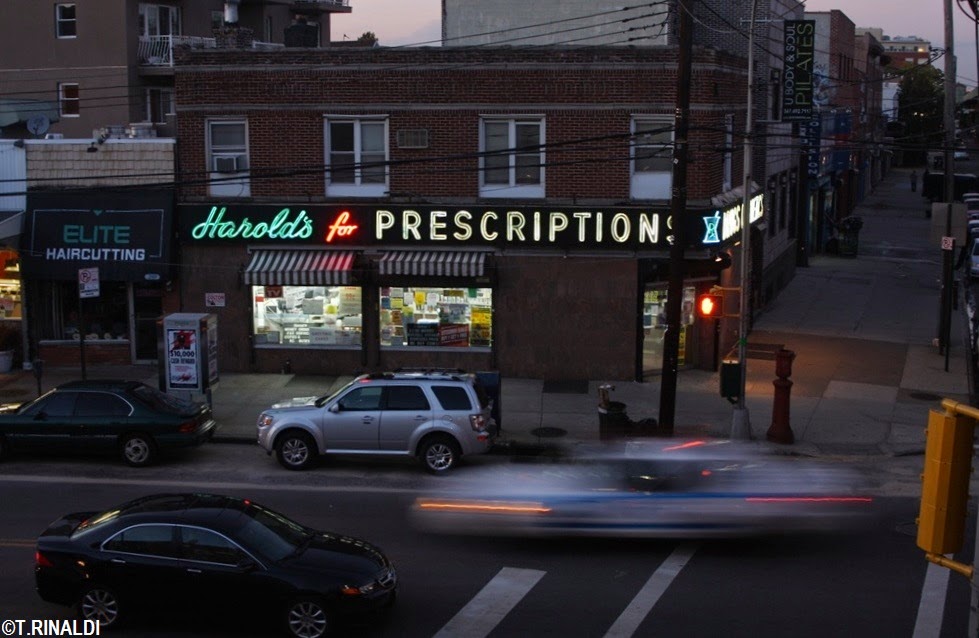 "I can remember hearing customers call him 'Signor Farmacista' and seeking his advice on health issues - so he definitely got to a point of acceptance and friendship with members of the community as time passed." 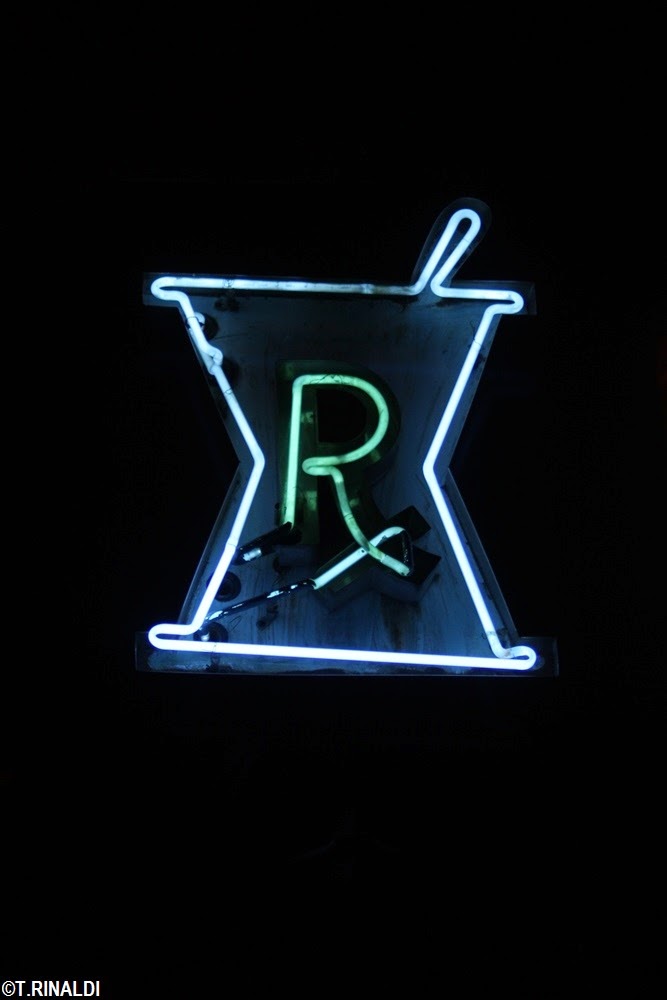 Ms. Radin's story is corroborated by records at the Buildings Department, which indicate a 1945-installation date for the sign, though its appearance seems more in keeping with signs of the following decade.  The sign wears the makers mark of Super Neon Lights of Bensonhurst, an Italian-American-owned shop that has been in the same family since the 1940s and is still one of the most active sign companies in this part of Brooklyn. 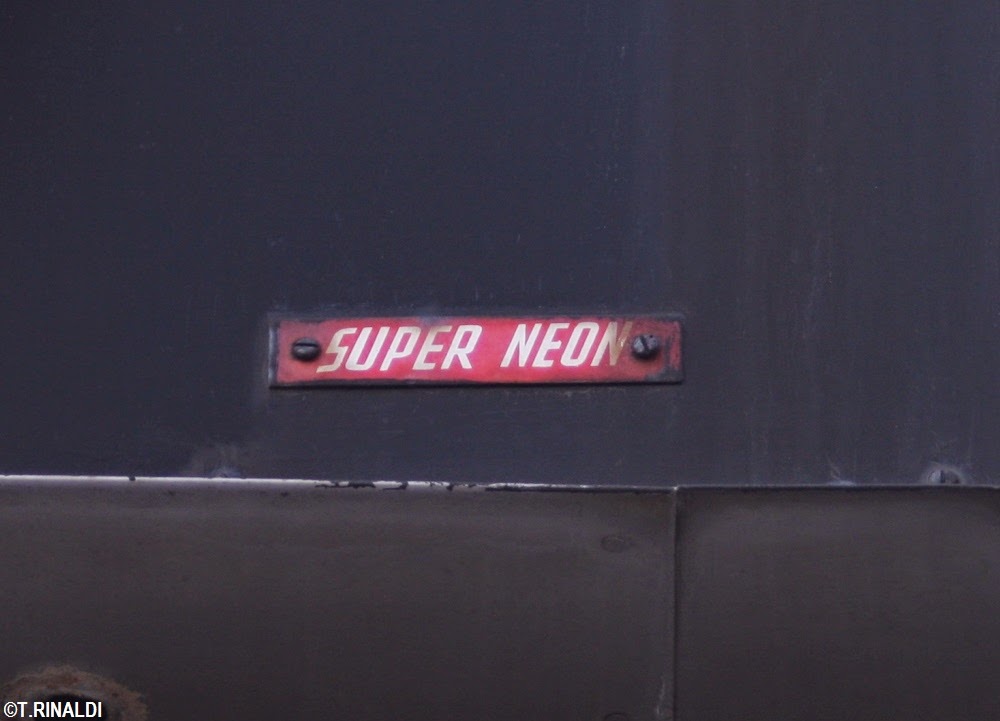 Sadly, Harold Friedman's tenure in Gravesend was cut short by illness in 1980, just over 20 years after his name went up in lights over Avenue U.  "He died at 51 of heart disease and I still recall the large community turnout at his funeral," recalls his daughter.  More than thirty years later, Harold's name still brightens the shadows under the old Culver viaduct, a favorite among enthusiasts of New York's old signs and storefronts.  "My dad was extremely proud of the appearance of his store," writes Ms. Radin: "no doubt he would have been smiling his characteristic big smile at the artistic impression the sign now creates."

• Harold's at Ephemeral NY, Project Neon and the Lost City blog.
• Harold's and other sights on Forgotten New York's grand tour of Gravesend.

• Upstate, Newburgh's historic Ritz Theatre is getting a new marquee.
• Some North Carolina Neon at Shorpy.
Posted by T.E. Rinaldi at 4:39 AM No comments: