July 4th: a good day for bar-b-cues, parades, not going to work, and - that's right - American flags rendered in neon. 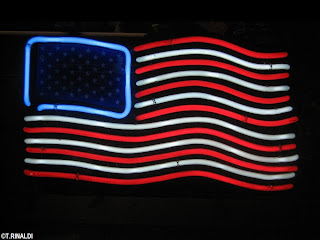 I spotted this little darlin' some years ago at a newsstand in the Union Square subway station.  It has since disappeared, I am sorry to report.  But as a quantity item, there seem to be others around.  Keep an eye out and drop me a line if you spot one! 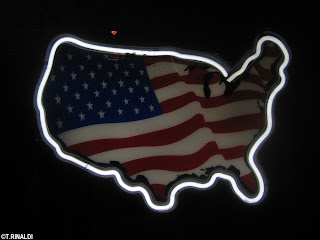 If that doesn't get your patriotic juices flowing, there's also this handsome jobber, which caught my eye from the window of the New York Nail salon on Route 9 in Hyde Park, New York. 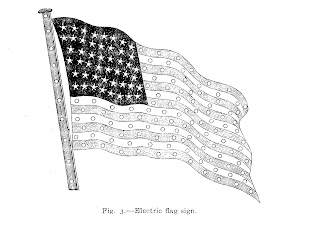 
In researching the neon book, I found that electrified displays of patriotism are nothing new.  Precedents go back to the earliest days of incandescent bulb signs.  William Hammer, the Edison-associated credited with creating the world's first electric sign, is said to have mocked-up animated electric flags as early as 1889.  In the years leading up to America's entry into WWI, animated flag signs became profuse: Betts & Betts, then the industry's most prominent maker of "flasher" mechanisms for electric signs, even introduced a special automated switching device intended for animated flags by 1916. 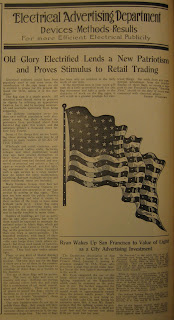 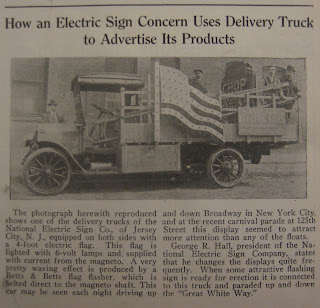 Stars and Stripes aglow, around the time of the First World War.  (Signs of the Times magazine, Feb-Mar 1916)

Illuminated patriotism seems to have subsided somewhat during the interwar years, but made a come-back during WWII, by which time Americans had turned to neon as their illuminant of choice.  Today one can still find a few neon iterations of Old Glory out and about.  But here as with so many other displays, the trend is toward LEDs, as the recent conversion (from fluorescent lamps to LEDs) of the illuminated flag at the Times Square Armed Forces Recruiting Station attests.  Proof thro' the night that our flag, if not our neon, is still there. 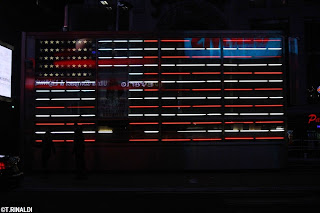 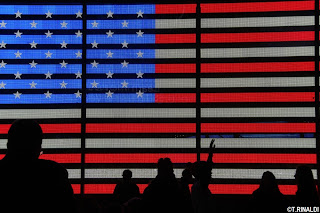 The Armed Forces Recruiting Station in Times Square, before (above) and after (below) LED-ification. (T.Rinaldi)
Posted by T.E. Rinaldi at 11:50 AM