But for a decision of New York's Landmarks Preservation Commission, the Tudor City sign would be just a memory today, leaving 42nd Street's eastern terminus without one of its most visually engaging features.  Neon roof signs for apartment buildings were somewhat common in Los Angeles, but have always been rare in New York, the sign at Tudor City apparently being the only surviving example today. 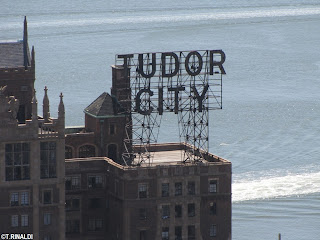 Tudor City, with the East River beyond.  (T. Rinaldi) 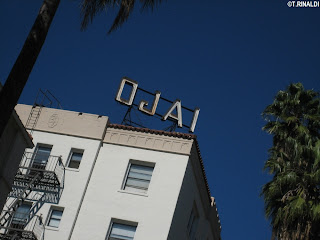 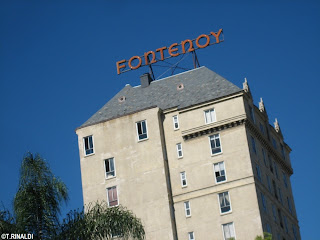 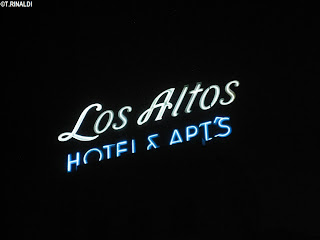 Signs over the Ojai, Fontenoy and Los Altos buildings in Los Angeles.  Neon signs for apartment buildings were somewhat common in LA, as the examples pictured above attest, but never really caught on in New York. (T. Rinaldi)


Originally, the Tudor City sign was part of a matched set, which beamed west down 42nd Street from atop a pair of high-rise apartment buildings.  Fred French, Tudor City's developer, conceived of the complex as an almost semi-suburban enclave in the heart of the city, eventually including ten buildings in all.  French positioned the signs to catch the eye of weary commuters heading back to Grand Central and the suburbs after a day at the office or a night on the town, as if to say "if you lived here, you'd be home by now." 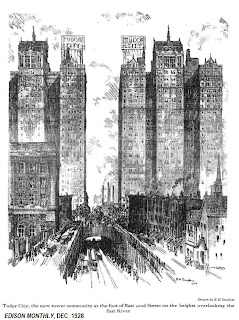 The signs reared their heads in the late 1920s, perched on the rooftops of Prospect Tower to the north and Tudor Tower to the south (completed in 1927 and 1929, respectively).  Incandescent bulbs originally outlined their giant letters, but after about ten years, the management upgraded to neon, hiring Claude Neon Lights to retrofit the sign over the Prospect Tower on the north side of 42nd Street.  The other sign had already been removed, likely because the construction of the Woodstock Tower at 320 East 42nd Street blocked it from view. 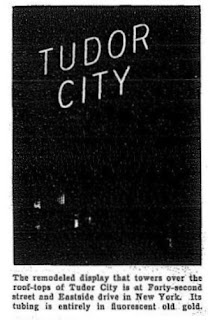 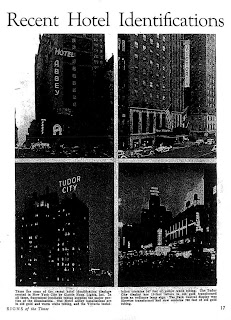 The surviving sign hasn't come alight in decades, but a 1939 blurb in Signs of the Times magazine records that its tubes once glowed a shade of "old gold," which would have been more or less consistent with the off-white hue of the incandescent bulbs they replaced.  ("Old gold" was a relatively popular color for neon signs at the time; the great RCA sign atop 30 Rockefeller Plaza used the same shade.)  In 1995, Prospect Tower's co-op board filed for a permit to remove the sign, but was rebuffed by a unanimous vote of the Landmarks Commission, which had designated the entire Tudor City complex for protection in 1988.  Thus spared to survive into more "enlightened" times, perhaps one day that old gold glow might once again brighten the east end of 42nd Street. 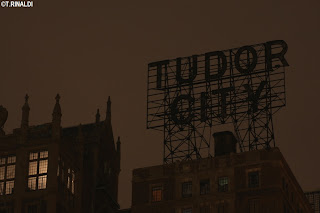 • A November 1995 New York Times story by Christopher Gray on the co-op's failed attempt to have the sign removed.
• The Landmarks Commission's in-depth designation report for Tudor City, by way of the Neighborhood Preservation Center.

• New York Neon featured on last week's "The Debrief with David Ushery" on WNBC (Sunday, June 24, 2012)!
• From the Lost City blog, great news on salvation for the Sokol Brothers sign in Brooklyn.
Posted by T.E. Rinaldi at 3:59 PM