Picture it:  Tuesday, October 12, 2010.  Excitedly, I scurried to the subway from my office in midtown after work.  Destination: the Estates Pharmacy in Jamaica, Queens, where I hoped to shoot one of New York's best classic neon storefronts.  I almost made it through the turnstiles before I realized I'd left my tripod back at the office.  Fast as I could, I dashed back to grab it.  I had already shot the Estates by day and by night, but I wanted dusk shots for the neon book, and in about 45 minutes I would lose my light. 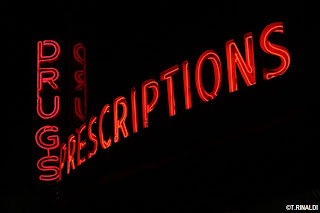 Estates Pharmacy by night, August 31, 2009. (T.Rinaldi)
Back at the subway, I jammed into the uptown 6, sweat beading on my forehead.  Down the escalator to the Queens-bound E at 53rd and Lex, across the platform to the F at Roosevelt Ave., then, finally, 169th Street, second-to-last stop.  No time to waste, I pulled out the legs on my tripod as I ran up the steps.  The sky above glowed a cool blue: thank God, I'd made it just in time.  At the top of the stairs I turned, ready to take in the scene I had trekked here to shoot. 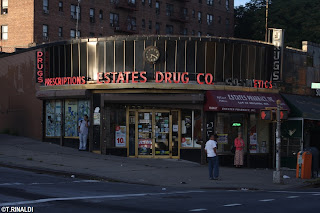 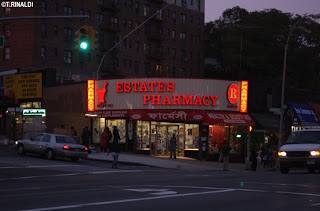 But it was gone.  The folks at the Estates Pharmacy got a new sign.  Not wanting to believe my eyes, I stopped abruptly in my tracks, muttered the f-word, and then, the seven stages of grief having quickly run their course, slumped against the steel post under the green subway globe by the top of stairs.  A cop on the beat, seeing my dejected posture, stopped and asked what was wrong.  "Neon signs?  Ain't ya been to Times Square?" 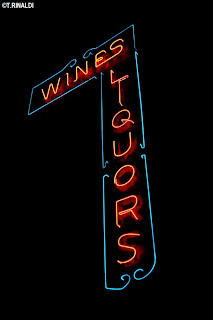 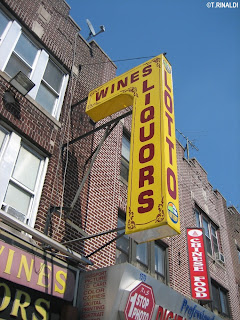 College Wines & Liquors, on Flatbush Avenue by Brooklyn College, before and after.  (T.Rinaldi)
Like a recurring nightmare, I have re-lived this sorry episode over and over again in the five years I've been after New York's vanishing fleet of midcentury neon signs.  At Times Square as in Jamaica, the old girls have grown mighty scarce.  Their disappearance has been both motivating and frustrating.  On the one hand, like winning a bet against your own kid's little league team, there is a certain cold comfort that comes with having successfully documented a vanished sign. 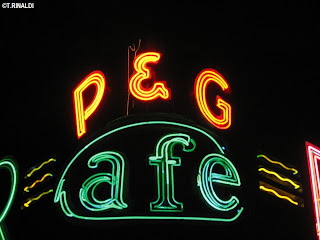 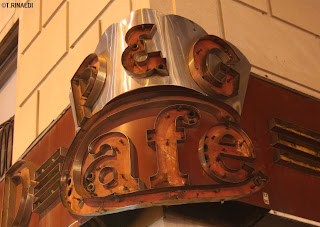 The P&G Bar, in its latter-day prime (top) and during dismantling in January 2009 (bottom).  The wall is blank today.  (T.Rinaldi)


But then there are those signs that vanish before I manage to get to them.  Probably a dozen times, deceived by an outdated Google Street View image, I've schlepped across town only to find a blank wall where the sign used to be. In my "Lights Out" post at the end of 2011, I promised a gallery of vanished signs - well here it is, at nyneon.org.  My friend Rob Yasinsac remarked that one could make a pretty good sign museum just with the ones we lost in 2011.  A small handful of these have found new homes - mostly under tarps in backyards or tucked away in storage sheds.  But most are gone for good, except in these photos.
NEW YORK NEON

IN OTHER NEON NEWS:
• The Artkraft Strauss files are now available for researchers at the New York Public Library!  I'll be there this weekend...