The Neon World of Pilar Montero

Last week brought sad news of the death of Pilar Montero, the 90-year-old former proprietress of the Montero Bar & Grill on Atlantic Avenue in Brooklyn.  Montero's is one of two establishments on this stretch of Atlantic Avenue whose storefronts are graced by veteran neon signs.  It so happened that Mrs. Montero was connected with both of them.  In addition to the bar she opened with her husband in 1945, there is the shuttered Long Island Restaurant up the street, which was run by her sister-in-law, Emma Sullivan. 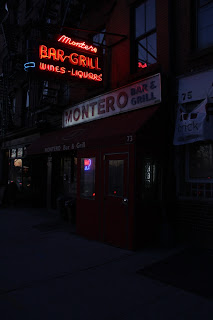 As the neighborhood changed around them, this pair of stalwart businesses acquired an almost legendary status among devotees of the vanishing city.  The Long Island closed in 2007, but seems now to be undergoing renovations that (fingers crossed) might re-light its spectacular ensemble of stainless steel neon signs.  The Montero Bar & Grill, deo gratias, is still open for business, Mrs. Montero's heirs having taken over after her retirement some years ago. 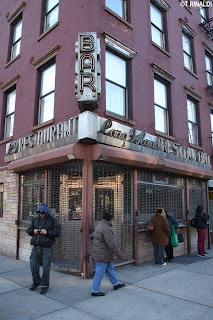 The Long Island Restaurant, at 108 Atlantic Avenue, across the street and one block up from Montero's. A superb ensemble of stainless steel signs installed by an unknown sign shop c. 1951.  (T. Rinaldi)

Montero's neon sign is the work of the Corvin Neon Sign Co. of Brooklyn.  Buildings Department records suggest an installation date of 1949.  The author Frank McCourt lived in an apartment over the bar for some years.  "Outside my window, the MONTERO BAR neon sign blazed on and off, turning my front room from scarlet to black to scarlet," he recalled in his book Teacher Man.  The sign still comes aglow each evening, but has not flashed in recent years. 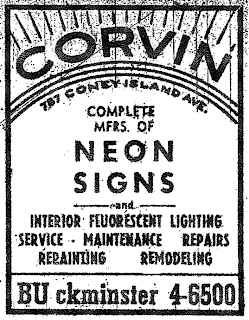 I stop into Montero's every now and then when I'm in the neighborhood.  I wish I could say I remember Pilar Montero.  I think we once exchanged friendly salutations, a nod and a "goodnight" on my way out one quiet winter evening, after enjoying a rousing round of Jeopardy on the TV over the bar. Last week, Mrs. Montero's funeral was held at Raccuglia & Son Funeral Home on Court Street, about a ten minute walk from the bar.  Like Montero's and the Long Island Restaurant, the Raccuglia funeral home boasts some Brooklyn's finest classic storefront neon, one of about ten funeral homes in the city that still have vintage neon signs over their doors.  Raccuglia's signs seem not to have come alight in many moons.  Alas, such is the neon world of Pilar Montero, the fading ambiance of the twentieth century city. 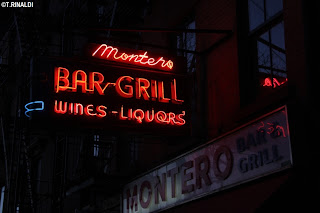 • A tribute to Mrs. Montero in the NYT, and a great write-up featured in the Times back in 2006.
• Another great sign by Corvin Neon, documented by Frank Jump in 2004, which has sadly since perished.

• At nyneon.org, maker identified for the wonderful wonderful United Airlines sign at LaGuardia Airport
• As of Sunday, January 22, 2012, Rocco Restaurant's ancient swing sign on Thompson Street hangs over an empty storefront, its neon tubes removed.
• The Music Box Theater's 1954-installed vertical sign has come down for a refurbishment.