Just before Christmas I ran across one of the most intriguing neon relics I've found in a long time, up in the Bronx.  While hustling down Hunts Point Avenue with some friends, en route to a Friday evening performance of "Los Nutcrackers: A Christmas Carajo" at the Bronx Academy of Arts and Dance, I spotted an anomaly perched over a ramshackle storefront across the street.  "Do we have time for me to run over and grab a photo of something?" I asked my friends humbly.  "After the show!" they grumbled collectively, and we shuffled on. 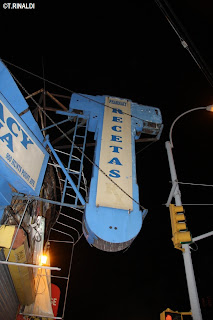 Three hours and several coquitos later I dragged my cohorts over to the Point Pharmacy, which occupies the rounded corner of a taxpayer building at the intersection of Hunts Point and Garrison Avenues.  Behold, the weatherbeaten ruin of one of New York's oldest surviving neon signs.  The neon tubes are gone, and the whole thing has been slathered in a coat of ill fitting blue paint.  Ghosts of its original lettering peek out from behind a modern sign panel installed over the old sign faces. 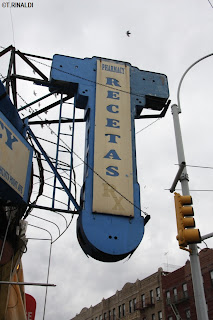 Ruins have fascinated me for as long as I can remember (I co-authored a book on them some years ago).  Some kinds of structures make better ruins than others.  Neon signs, I have found, often make wonderful ruins.  To wit: Point Pharmacy.  Of course it would be nice to see the sign come alight, and its future would look a lot better had it been consistently maintained over the years.  But its neglected state testifies for all the years it has been here, all the changes it has seen over eight decades.  For those of us who admire it, the sign's weathered aesthetic lets us feel that we have discovered something, found some beauty that is lost on most people. 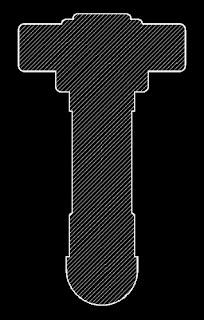 Despite its decrepitude, this sign is one of the better examples of its period in New York today.  Its symmetrical, stylized silhouette is a hallmark of electric signs made through the mid-1930s.  Only a handful of others survive in the city (see Nathan's Famous, Lascoff Drugs, Rudy's Bar, and Casa Oliveira Liquors).  The sheet metal along the sides of the sign has deteriorated, but the sign faces, likely of porcelain enameled steel, have held up well. 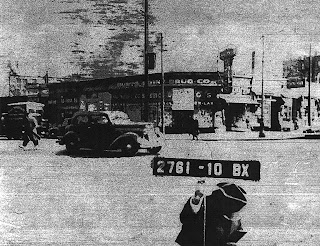 A quick search of records at New York's Department of Buildings (DOB) yields no clear installation date for this lovely lady.  Based on its style I suspect it showed up here around 1935; it is present and accounted for in the city's tax photo, taken c. 1940.  The microfilm is fuzzy, but the photo shows that this corner drug store has been here for at least 70 years. The original copy (lettering) appears to have read HUNTS POINT across the top, DRUGS down the center.

If I had a million dollar bill, I would call up the folks at the Point Pharmacy and ask if they'd let me have one of my new friends in the neon business give their great old sign the Statue of Liberty-quality restoration it deserves.  Those old sign faces could be cleaned and mounted to a new internal steel armature if needed, with new sheet metal around the edges, and, of course, new neon tubes (I'd go for red letters with a blue border, like the old Nathan's sign).  It's fantasy, I know, but - there's always next Christmas.

IN OTHER NEON NEWS:
• Check out Kirsten's spectacular Project Neon montage in the NYT