Lights Out 2016: Signs We Lost This Year

As usual, this's year's handful of neon casualties includes some real favorites - signs that just seemed too good to disappear.  Alas, as far as vintage storefront neon is concerned, nothing is too good to vanish.  If the displacement of Manhattan's old P&G bar weren't enough to prove my point, this year we can look to the Antelis Pharmacy in Brooklyn, or - from the dear-God-how-can-it-be-real department, the impending demise of the Carnegie Deli in Midtown.  Behold, then, the year's losses, to file away with David Bowie, Prince, American Exceptionalism, and the other incredible losses of an incredible year.

A note: also as usual, this year's list includes some signs that may have disappeared prior to 2016, but whose loss I only got wind of this year. 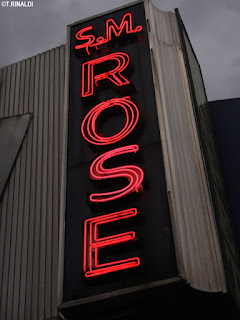 Once a bright spot on Fordham Road in the Bronx, the old S.M. Rose Chevy sign has rode off on the bat-wing tailfins of a '59 Impala, into the neon sunset.  The dealership itself disappeared years ago.

Antelis drugs moved this year to a smaller storefront down the block, abandoning one of the better surviving neon storefronts in the city.  Along with Maiman's Drugs on Eastern Parkway, which disappeared a few years back, Antelis was the work of veteran signman Charlie Klein and the Silverescent Neon Sign Co. of Brooklyn.  Does anyone have any updates on the fate of the old sign? 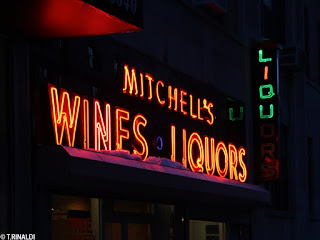 Mitchell's Liquors boasted one of the more memorable historic storefronts on Manhattan's Upper West Side.  The proprietors replaced the signs this year with decent facsimilies. 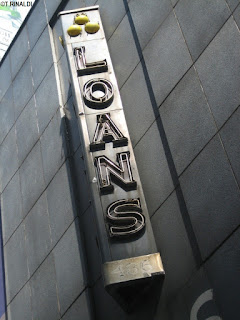 S&G Gross closed this year after more than 100 years in business.  Its remarkable three-story storefront (profiled in-depth here) has now vanished too, as the whole corner seems poised to be cleared for large scale new development. 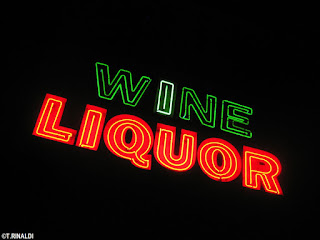 This sign was a standout on Seventh Ave in Chelsea for years.  It made way for an LED replacement this year. 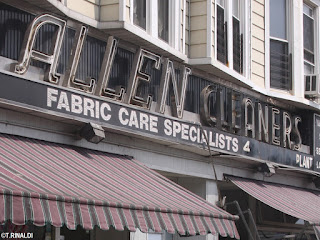 Stationed just outside the main gate of the New York Botanical Garden, Allen seems to have closed up shop sometime within the past few years. 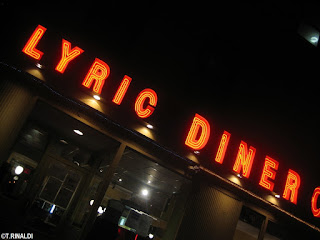 Not an old sign, but the Lyric's exposed tube neon signs brightened the corner of 22nd and Third in Manhattan in classic style.  The restaurant's disappearance this year falls in with a trend of similar diner vanishings all over town. (Footnote: a new diner has taken its place.) 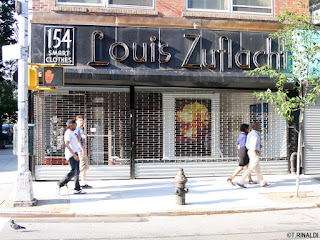 Zuflacht's "Smart Clothes" on the Lower East Side closed years ago, but its signs lingered on, favorites relic in a neighborhood that has seen intense gentrification in the past decade.  The old channel letters may be entombed behind newer, unremarkable signage that appeared here in the past year or so. 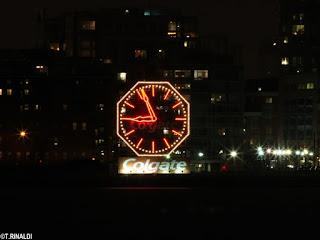 Jersey City's storied Colgate Clock has been LED-ed.  Originally lit with incandescent bulbs, the sign has undergone several reconstructions (it was converted from incandescent to neon at one point), but this latest one (apparently undertaken in 2013) seems to have really sapped it of historic character (scroll down at this link). 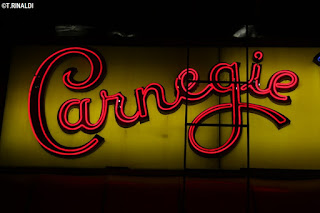 I will hold back from editorializing on the needless demise of the Carnegie Deli, which will close at the end of 2016 after 79 years in business, and simply offer this simple death notice and plea for someone to at least save its fantastic sign, about which more here.
Posted by T.E. Rinaldi at 4:13 AM