S. & G. Gross, a pawn shop at 486 Eighth Avenue (just above Penn Station), always ranks highly on my list of favorite places in town.   I like its three-story porcelain enamel facade.  I like that it lends an element of noir-ish grit to an increasingly over-sanitized city.  And, of course, I like its neon sign, though I've never seen it come aglow. 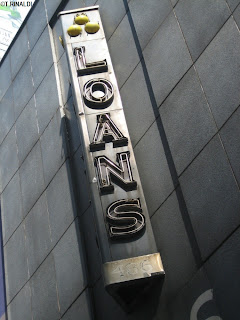 The sign is the centerpiece of the afore-mentioned three-story porcelain enamel facade, which is otherwise unadorned, apart from big white letters announcing S. & G. GROSS CO. INC., emblazoned over the storefront.  Such facades appeared across the country in the 1930s, very often with concomitant neon signs, as landlords or shop owners sought to modernize aging commercial buildings in American downtowns. 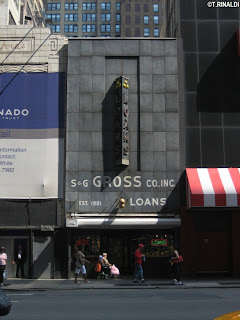 As I learned while researching the neon book, many of these modernizations appeared thanks to financial assistance from the federal government, which offered low interest loans through National Housing Act of 1934 as a way of stimulating the economy during the Great Depression.  The perplexing irony of these facades now is that many of us (myself included) who fawn over them today wince at the sight of similar alterations made in our own time.  Many of these great facades, now historic, obscure or obliterate even more historic facades beneath them. 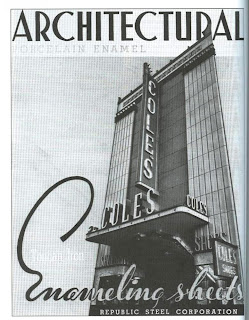 So typical are such facades of the 1930s that I always assumed the S. & G. Gross facade to be a product of that era.  But lo, what happens when we assume!  Turns out the Gross facade came quite a lot later: records at the Buildings Dept (DOB) indicate a surprisingly latter-day installation date of 1959, the handiwork of architects Telchin and Campanella. 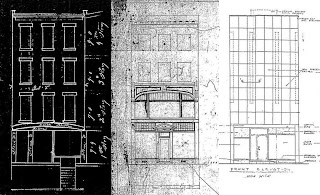 As for the sign, the DOB dossier yielded no information (of course).  It did however serve up an unusually interesting evolutionary study of the little building from which it hangs.  Architectural drawings dated 1875, c. 1920 and 1959 provide snapshots in the life and times of this modest midtown address as it changed through the years, making the S. & G. Gross building a prime case study for many thousands of buildings like it across the city and providing a peek at what lies beneath that porcelain facade. 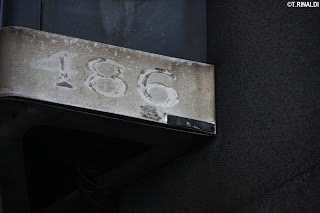 The sign, however, remained unattributed, until one day I noticed that the paint covering its maker's placard had receded just enough to reveal the telltale lettering of the Grauer Sign Co. of the Bronx.  Grauer's work also includes the sign over D'Aiuto's bakery three blocks down Eighth Ave, which appeared around the same time as the Gross storefront.  Gross and D'Aiuto occupy but one layer of the great palimpsest that is the urban landscape of New York.  Sadly, this particular layer seems to grow ever thinner as time goes by. 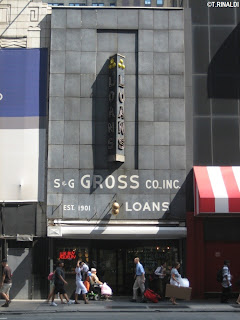 • A visit to S&G Gross by NYTimes writer Chris Grey back in 2009.
• More fun facts on S&G Gross from Walter Grutchfield at 14to42.

• The Rchive, nos. 3 & 4 - neon typography gets its due at Paul Shaw Letter Design.
• After a brief scare apparently sparked by an anonymous comment on this blog, word that the Kentile sign is here to stay - for the time being, at least...