If I hadn't called up Riverside Liquors to ask them about their sign while researching the neon book, I'd have never known the quirky history of this particular sign that makes it one of my favorites in New York. As the sign's age suggests, Riverside has been an Upper West Side institution for a long, long time.  When the shop moved to a new location this past summer, the sign came with them.  It now shines from a new perch, at 2728 Broadway, just below 105th Street. 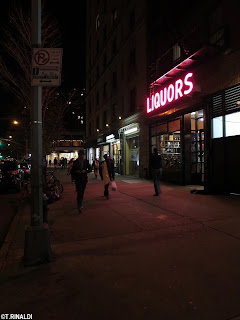 What one wouldn't know to look at it is that this isn't the first time Riverside and its big neon LIQUORS sign have moved.  Until around two decades ago, the sign hung over a storefront at the southeasterly corner of Broadway and 105th Street, about 100 feet from where it is now.  And - more interesting - it originally belonged to a three-part set that included two horizontal raceway signs and a big vertical display that hung over the corner. 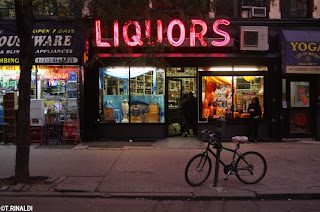 Riverside's intermediate home, until this past summer, on Broadway between 105 and 106.  (T. Rinaldi)

The sign can be seen its original configuration in the city's circa-early-80s tax photos, now housed at the Municipal Archives.  The vertical sign featured a revolving time-and-temp display at its base.  People headed to work in the morning would set their watch by that clock, recalled John of Riverside, who answered the phone when I rang them up.  Buildings Department records suggest an installation date of 1955 for Riverside's neon triptych. 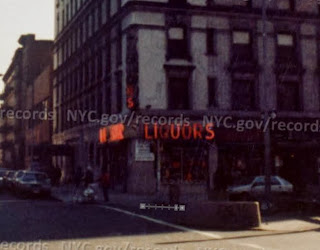 105th and Broadway, wreathed in neon in the awesome eighties. (Municipal Archives)

Though the tax photo shows them half-dimmed in classic neon dysfunction, John remembered the signs for their reliability:  "Them things never went bad, not in all the years I worked here," he told me.  When their building at 105th and Broadway went co-op around 20 years ago, Riverside relocated half a block further uptown, taking just the LIQUORS sign with them.  There the sign and shop stayed until this past summer, when they moved again to their current location. 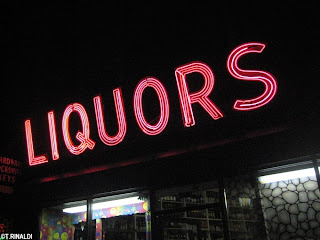 Inasmuch as New York's old neon signs are metaphors for survival against the odds, Riverside and its old sign say it loud and clear.  Stop by, pick up a bottle of something to thaw those frozen toes in these cold, dark months, and raise a toast to neon and perseverance.

• On the subject of old UWS businesses shuffling signs and storefronts, check out this gem posted a few weeks ago at the Ephemeral NY blog.

• Another one down: via James and Karla Murray, news of the disappearance of the St. Charles Garage sign, by the Queensborough Bridge.