To look at it now, you'd never suspect the St. James Hotel (off Times Square) of having once been the quintessential seedy "transients" dive.  Unless you know that such was the state of most old hotels in this part of town through the 70s, 80s and 90s, when weathered neon signs seemed to hang over their entryways on every midtown sidestreet. 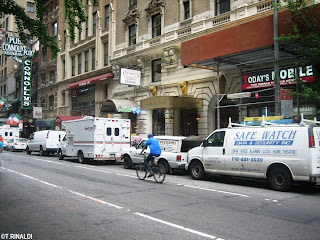 Neon HOTEL signs hung from the old brick façade of the St. James until fairly recently, finally coming down about ten years ago.  This particular signage was recognizable for having appeared in not one but two films, in which the St. James played the role of the gritty, down-and-out flophouse from central casting.  Director William Friedkin used the St. James in his 1980 film "Cruising," a psycho-sexual thriller about a serial killer on the loose in New York's then still rather ribald gay bars.  Not ten minutes into the movie, the St. James' old neon sign portends a brutal slaying soon to play out in a cheap room upstairs. 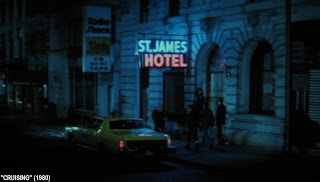 The. St. James in its gritty heyday. (Cruising)

The same sign makes another cameo in director Penny Marshall's 1988 film Big, starring Tom Hanks.  After eleven-year-old Josh Baskin is rendered unrecognizable in the body of a grown man, he and a school chum make their way to New York, where they eventually wind up at Times Square in search of a cheap hotel.  "You lookin' for some fun tonight sweet thing?"  "No thank you."  After negotiating streets of beggars, prostitutes and wandering schizophrenics, they finally find themselves bathed in that familiar glow.  "Hey, this looks OK," reassures Josh's friend.  The camera pans up toward the that same old sign.  "No it doesn't!" comes Josh's desperate reply. 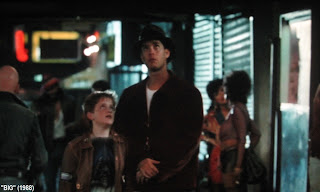 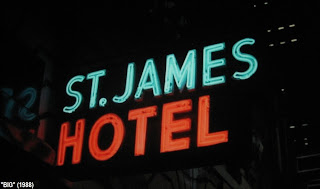 Hollywood's unflattering characterizations of the St. James were not without basis, at least if one is to judge by a write-up that appeared in the New York Times under the headline "Shadows Near the Bright Lights," one year before the release of "Big."   Times writer David Pitt detailed tough times at the St. James and its neighbor, the Normandie, both of which by then had joined the ranks of the city's Single Room Occupancy, hard-knocks hotels.

"The day clerk at the St. James, who asked that his name not be used, acknowledged that prostitutes routinely try to bring customers upstairs. But he said he always did his best to keep them out, sometimes with the aid of a baseball bat.  'Sometimes a hooker will sneak by me,' he said from behind his desk-to-ceiling bulletproof canopy. 'But look, I don't know who is and who isn't. How am I supposed to know? They go into the Plaza, too, but who stops those girls?' 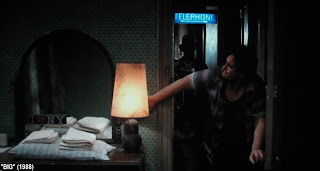 "'Now drugs - that I won't allow,' he said, reaching under the counter to display his Louisville Slugger, a Fred Lynn autograph model. 'I see drugs, I say Mr. or Mrs., out you go.'"  Mr. Pitt also scored some choice quotes from the hotel's night clerk:  "'See where the glass is broken?' he asked. 'We wouldn't let this guy in the other night, so he kicked in the door. That kind of pimp, they're the worst - filthy, dirty, living on crack. Your regular pimp is usually clean... These are lowlifes.'" 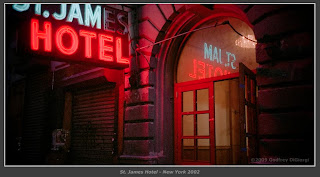 The St. James' old neon signs hung in there all the way through the Times Square ball drop that rung in the new millennium.  They finally came down a few years later, apparently around the time the St. James picked itself up, shook itself off, and re-opened as a more tourist-friendly hostelry.  Today the pimps and the lowlifes seem to have checked out:  the St. James gets decent reviews at yelp.com, though one visitor, a certain Karla P. from Encinitas, California, complains that the management still uses "actual metal keys" rather than electronic card readers for room access.  The neon may be gone, but the old St. James lumbers on, its checkered past now safely pickled in celluloid. 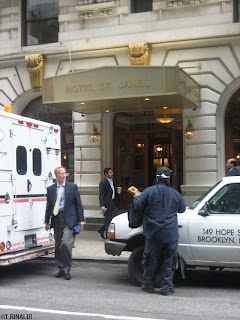 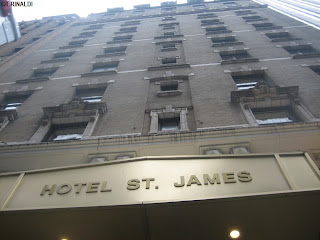 THIS IS THE SIXTH in a series of stories entitled "Hotel Neon," exploring the unique resonance of neon hotel signs in the American psyche. See also:


• Via the Lost City blog, D'Aiuto Pastry closed this past Sunday (8/11/2013), supposedly for "renovations."  This does not bode well for that fantastic sign...


• From DNAInfo: some serious backpedaling from our friends at U-Haul, after their erasure of Brooklyn's landmark Eagle Clothes sign in Gowanus.
Posted by T.E. Rinaldi at 3:59 PM