There was something particularly vexing about the sight of Circo's handsome old signs un-lit.  I had really, really hoped to include this venerable Bushwick pasticerria in the neon book. In the end I had to make do with daytime shots of darkened, snow-covered signs. 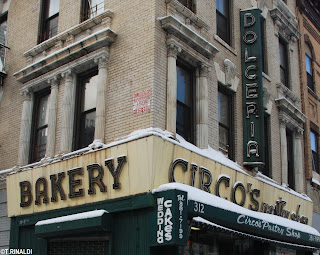 Then, not long ago, I heard from Robbie Ingui of Artistic Neon that the fine folks at Circo's had hired him to bring the signs back to life. In terms of restoration, I often liken old neon signs to old cars. Sometimes, a little spit and polish is all you need.  Other times, a sign has reached a point where it needs to be restored from the ground-up. 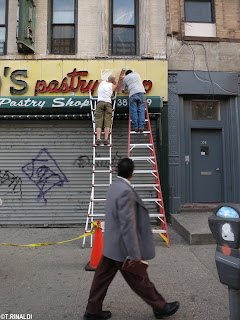 Nice work if you can get it: making patterns for replacement tubes. Robbie Ingui assited by Greg Lowe. (T. Rinaldi)

At Circo's, Robbie found the signs in fairly decent shape. Their 60-year old enameled sheet metal had been painted over, stainless steel channel letters lost their sheen, and the framework holding it all together had corroded somewhat over the years. But Robbie was able to get the signs re-lit without a full removal and reassembly, thanks partly to a crawlspace over the shop's ceiling that provided access to components in back. 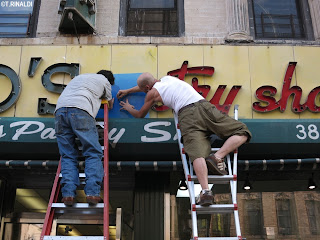 The neon tubes on the other hand hadn't fared so well. After 60 years, electrodes had failed, fluorescent coatings worn out, sockets had grown brittle and some tubes were cracked and broken. Rather than saw-off and replace each failed electrode and then re-pump gas into the tubes, Robbie fabricated a complete new set of glass letters to match the originals. 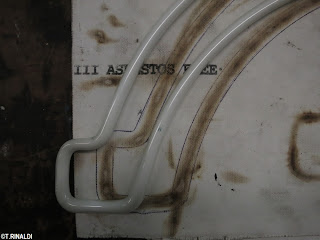 New tubes were bent to match patterns made from the originals. (T. Rinaldi)

Neon tube benders today employ the same basic materials and techniques that prevailed when Circo's first installed these signs sixty years ago.  The replacement tubes match their predecessors not just in size and color, but in almost every detail of their fabrication.  Even by the standards of architectural restoration, where fiberglass sometimes substitutes for terracotta, this is in-kind replacement to the utmost extreme. 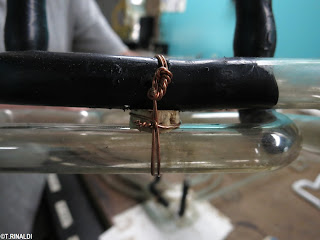 Cork separators and copper wire keep the tubes in position, just as they did on the originals. (T. Rinaldi) 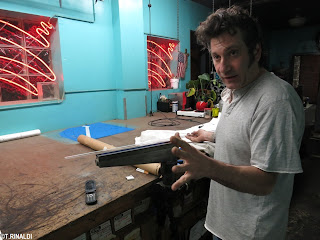 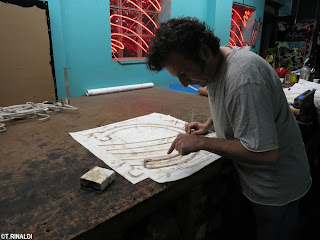 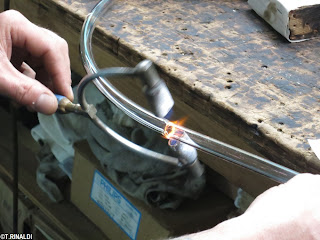 Back in the shop, Robbie demonstrates tracing, bending and splicing the new tubes. (T. Rinaldi)

Old neon signs and good Italian pastries seem to go hand in hand. To wit: Veniero's and DeRobertis on Manhattan's East Side, D'Aiuto's on the West Side, Egidio's up in the Bronx, Rispoli's in Bensonhurst (my family's old go-to, now gone), and of course Circo's. In my experience, Italian pastries just don't taste as good if they haven't come out of an old, neon-crowned storefront. 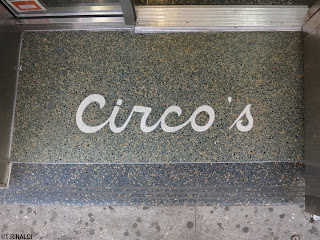 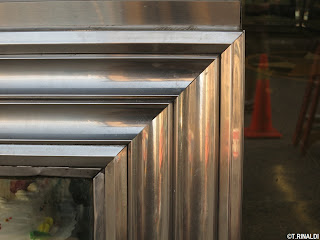 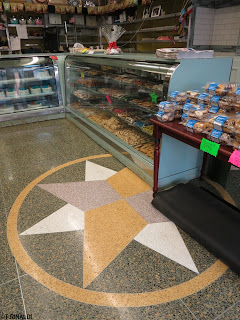 Of stainless steel and sfogliatelle: Circo's exudes authenticity in every detail. (T. Rinaldi)

Circo's has all the accoutrements of those classic, family-owned pasty shops that vouch for the authenticity of the goods within.  From its gleaming stainless steel window frames to its terrazzo floor to the neon over the storefront, it's all there and in great clip, too.  In their book Store Front, photographers James and Karla Murray tell us that Circo's has been up and running at its current location since 1945. The business originally opened at another storefront down the block two years earlier.  In 1970, old Mr. Circo sold the business to Nino Pierdipino, whose sons Salvatore and Anthony run the business today.  DOB records date the signs to 1953, making them 60 years old in 2013. 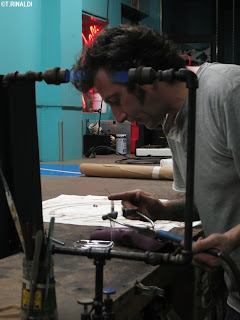 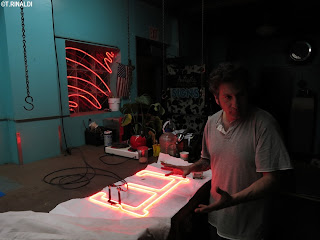 Robbie fits electrodes and fires up one of the replacement tubes. (T. Rinaldi)

Recently, when the Pierdipinos decided to do some sprucing up, they actually considered scrapping the neon and going LED.  Happily, they decided to repair the signs instead, starting with the horizontal fascia signs (the vertical DOLCERIA sign may come later).  Artistic Neon, the shop Circo's contracted to do the job, is located just across the Brooklyn-Queens border in Ridgewood.  Like Circo's, Artistic Neon is a multi-generational, family-owned, Italian-American business, having got its start 40 years ago by Gasper Ingui.  Gasper began as a tube bender in the early 1950s.  Later, he passed his skills along to Robbie, his son, who runs the business today. 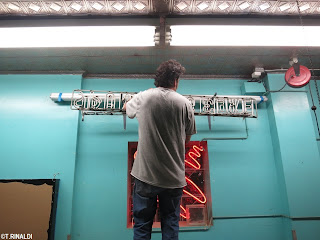 Last week, having cleaned up the sheet metal and re-painted the metal backings within the channel letters, Robbie set about installing the new glass letters with the help of Greg Lowe, who he had enlisted to assist with the Circo repairs.  The job took most of the day.  Then, a little before 4pm, Circo's came unceremoniously back to light.  The sign glows now as well as it ever did, but it still bears some of that patina that befits a fine old storefront like this.  Inasmuch as a sign's job is to draw attention, nothing does the job like an old neon storefront today.  Circo's old sign isn't just the brightest thing on the block: it marks this as a business that has stood the test of time.  There is nothing like it anywhere on this stretch of Knickerbocker Avenue today.  Maybe it's just me, but I swear I can taste the difference. 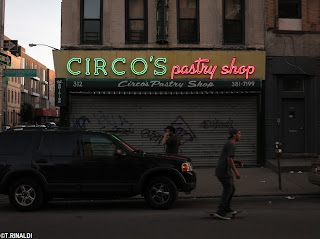 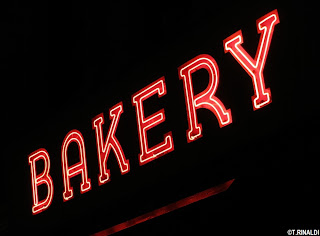 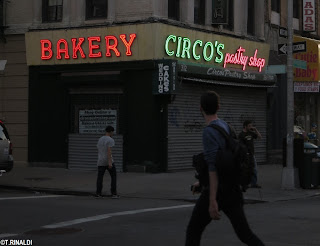 MANY THANKS to Sal Pierdipino, Robbie Ingui, Greg Lowe and Ellen Barton for their help and moral support.

IN OTHER NEON NEWS:
• As forecast, Macy's old reverse-channel beauties at 34th and Seventh are gone, as is Tad's Steaks c. 1960 signage across the street.
• Last chance to pick up some old Williamsburg shoe store neon!  Contact me for details.
• Some very, very stimulating historic photos of So-Cal neon in its prime, via Gizmodo and the Southern California Edison Archive.  (Scroll down - thanks to Emilie Evans for this link.)
• Ghost signage (not neon) on 14th Street, the via Ephemeral NY blog.
• A photographic tribute to some Albany (NY) neon, at the former Olympic Bar and Restaurant, by way of Chuck Miller, the Albany Times-Union, and the Society for Commercial Archeology.
• Enjoy the neon paintings of Kathryn Siegler (Thanks to Paul Shaw for the link).

• June 19, 2013, for the Lower East Side Preservation Initiative at the Neighborhood Preservation Center.
• July 22, 2013, at the NYPL / Mid-Manhattan Branch.