I could hear everything, together with the hum of my hotel neon.  I never felt sadder in my life.

Jack Kerouac, On The Road, published 1957

The sign lured you.  Like a hard-sell street hawker, its job was to drown out the competition.  This is the best hotel!  Stay here!  Once inside, you begin to realize that the brightness of the sign spoke less to the quality of the establishment than to the management's eagerness to get your money.  Outside, the sign's radiance promised a safe, clean respite.  In the room it's a different story: almost like a bait-and-switch, the bright light of the sign piercing into your room actually denies you the rest it promised.  (Unless, of course, it wasn't rest you came here for.)  Your cynical side tells you you've been had, that the management cares more about packing in as many guests as possible than about providing anyone with a decent night's sleep.  Soon it's common wisdom:  only dopes and suckers fall for those flashy neon signs.  Eventually, the hotel managers catch on, too.  Better hotels ditch neon.  The old hotels that keep the signs are those whose patrons are too dumb or too destitute to care. 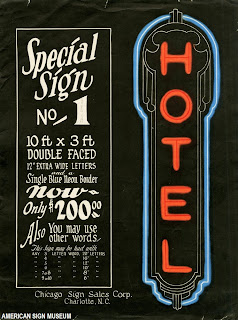 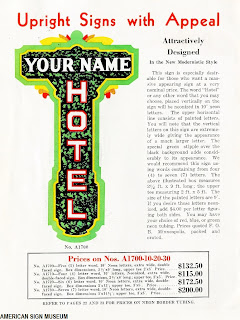 This was the general idea.  Sure, you could just pull down the shade.  But here, at these old hotels, neon signs became identified with capitalism's downside – unscrupulous commodity pushers bent on profit for profit's sake.  As mainstream hotels did away with neon signs, the less reputable hotels that kept the signs deepened the association.  Especially in declining American cities, such signs conjured up scenes of vice and vermin, violence, alcohol and prostitution, gunshots in the night, hourly rates, loud domestic quarrels overheard through thin walls, unsavory "transient" guests dealing drugs in dim hallways, dead bodies found in musty rooms, where buzzing, flickering neon signs beamed indifferently through dirty windows. 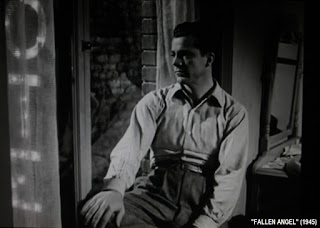 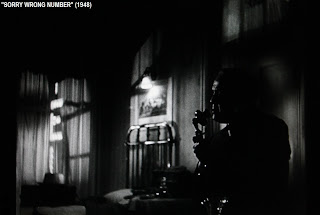 How this image became so indelibly etched in the mindset of the American mainstream is almost as fascinating as the imagery itself.   Writers and film makers exploited it, reflecting and perpetuating the association over and over again until no bohemian existence was complete without at least one sleepless night at the hands of a sign - ideally flashing - out the window of a cheap hotel room.  The ever present blinking sign motif appears in film as early as 1931, with director Mervyn LeRoy's "Little Caesar"(though the sign depicted belongs to a social club, not to a hotel).  Used perhaps to greatest effect in the hotel scene in Fritz Lang's 1945 film "Scarlet Street," the flashing sign device conveys disquietude, or, like a highway alert sign, warns of danger ahead. 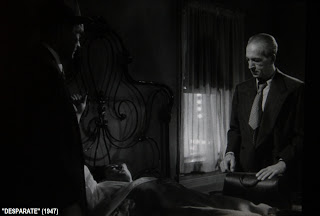 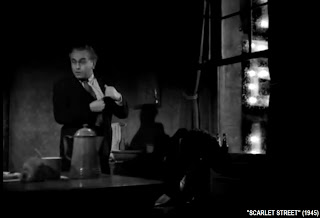 Early on, it is interesting to note, filmmakers used incandescent bulb signs for this part, seizing on their obsolescence to set a fringe mise-en-scène.  The transition to neon came in the 1940s, possibly beginning with Farewell, My Lovely, Raymond Chandler's seminal hardboiled crime novel of 1941. "I lay on my back on a bed in a waterfront hotel and waited for it to get dark," recounts the redoubtable Philip Marlowe:  "The reflection of a red neon light glared on the ceiling. . . . I thought of dead eyes looking at a moonless sky, with black blood at the corners of the mouths beneath them. . . . It got darker.  The glare of the red neon sign spread farther and farther across the ceiling." 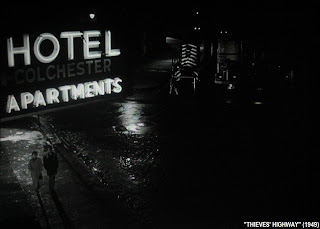 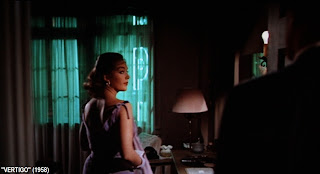 By the next decade, such vignettes made neon hotel signs an essential element of the film noir landscape, and of the bohemian iconography of demimonde characters such as Sal Paradise, protagonist of Jack Kerouac's beat novel On The Road.  From a tenderloin flophouse in San Francisco, Kerouac wrote, Paradise "looked out the window at the winking neons," after "a gray-faced hotel clerk let us have a room on credit. . . .  Then we had to eat, and didn't do so till midnight, when we found a nightclub singer in her hotel room who turned an iron upside down on a coathanger in the wastebasket and warmed up a can of pork and beans. . . .  I stayed in San Francisco a week and had the beatest time of my life." 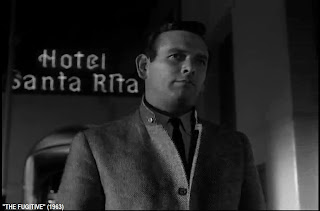 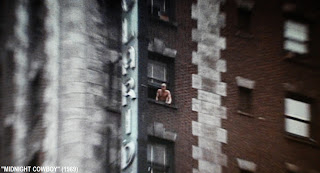 Separated by due distance of time, all of this seems rather quaint today. In New York, most of those old divey flops of yesteryear have been born again as high-end condos and co-ops. Sure there are still cheap hotels and SROs, but they seem less notorious now, and old neon signs no longer count among their compulsory accoutrements. If we could find a dingy old hotel with such a sign, we might even stay there for nostalgia's sake, so that we could feel just a little bit like Sal Paradise, a died-in-the-wool bohemian.  In a roundabout way, the same negative connotations that once sullied neon's repute now add up to an appealing mystique.  Judge with caution today's pariahs; they may yet have the last laugh. 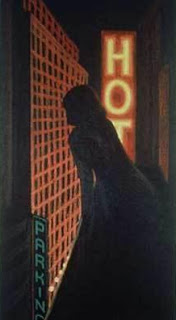 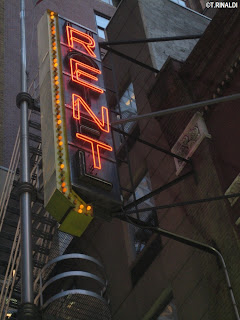 Sign for the musical "Rent", formerly hung from the facade of the Nederlander Theatre on West 41st Street.  The neon hotel as bohemian icon. (T. Rinaldi)

THIS IS THE SECOND in a series of stories entitled "Hotel Neon,"  exploring the unique resonance of neon hotel signs in the American psyche. See also:

• Photos and a brief story on New York Neon ran in last week's New York Times, in a great article by Aidan Gardiner.
• Another media mention in Curbed in a story by Dave Hogarty.
• By way of the Lost City blog, a last look at the ruins of the Sokol Brothers sign in Carrol Gardens, Brooklyn.
Posted by T.E. Rinaldi at 3:10 PM