Where do good signs go when their time is up?  Why, to Cincinnati, Ohio, of course, and the American Sign Museum.  Last month, my father and I made a pilgrimage to this esteemed institution, partly so that I could round-out some punch list items for this neon book of mine, and partly just because the place looked like it merited the 11-hour drive from New York.  Having made the trip, I'm happy to say it was well worth the effort. 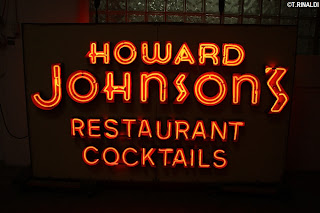 Relic from a vanished Manhattan Howard Johnson's preserved at the American Sign Musem - no, not the last Times Square HoJo's, but another one (the 1960 Manhattan yellow pages listed seven of them). (T. Rinaldi) 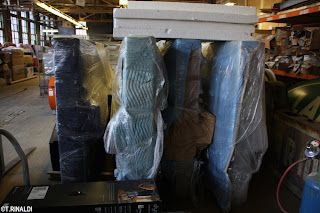 Sections of the old incandescent Times Square "zipper", recently acquired by the American Sign Museum after being de-accessioned by the Museum of the City of New York, which had taken them in when the zipper was LED-ed back in the 1990s.  (T. Rinaldi)

Certain friends, when told of our destination, responded quizzically: "the *what* museum?", they would ask.  I, however, am only baffled that sign museums are so few and far between.  Just think about how many antique auto museums there are!  Alas, from sea to shining sea, there seems to be just this one museum dedicated to signs.  This is not to discount two other museums (the Museum of Neon Art in Los Angeles and the Neon Museum in Las Vegas) that have also preserved many wonderful signs; but these others are devoted to neon, not to signs of all flocks. 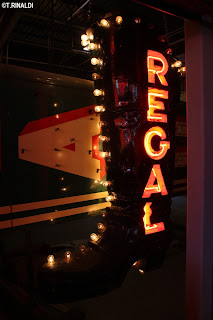 This electric boot once graced a Regal Shoe location in Brooklyn. (T. Rinaldi) 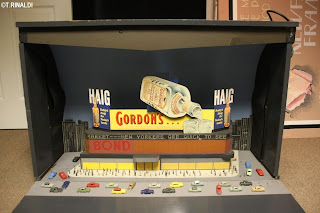 In addition to signs, the museum's collection includes historic ephemera and other items, such as various materials inherited from Times Square sign impresario Douglas Leigh.  Leigh's firm produced this mock-up showing a proposal for the Gordon's Gin and Haig Whiskey spectaculars that stood over the Bond Building in Times Square in the late 1960s. (T. Rinaldi)

The museum opened in 2005, the brainchild of Tod Swormstedt, whose family has published the Cincinnati-based Signs of the Times magazine for four generations.  In print since 1906, Signs of the Times has been the preeminent trade publication of the American sign industry for most of the years since then.  The magazine's back issues are an invaluable chronicle of American commercial design.  Having spent months chained to a microfilm reader poring over most of the magazine's entire run at the New York Public Library, visiting the museum was like seeing those grainy black and white images spring magically to life.  If I had been hit by a bus coming out of the library after one of those missions, heaven would have looked something like this. 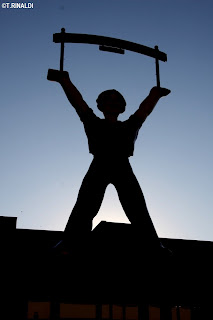 Sunrise over the Sign Museum.  This is one of a pair of giant genies that once advertised Aladdin Carpet Cleaning in southern California.  (T. Rinaldi)

One needn't be a sign enthrallee to enjoy this place:  the signs make an exciting eye-full all gathered together, and the less you know going in, the more you'll learn before you come out.  While neon predominates, there are all forms of signs here, gathered from all corners of the country (including NYC), properly curated and expertly displayed.  The presentation is sufficiently powerful to change the way one looks at old and new signs in the world around us. 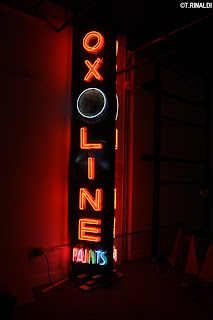 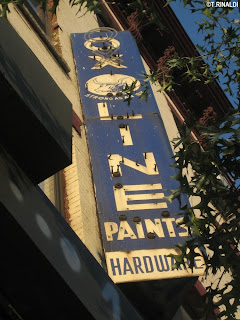 A preserved vertical sign for Ox-Line paints from the Boston area (top) has a cousin still in place in Williamsburg, Brooklyn (bottom). (T. Rinaldi)

The museum's entire collection is now (March 2012) being moved to a new location just north of downtown Cincinnati.  Housed in part of a historic brick industrial complex, the museum's new digs will feature a research library, event space, and an on-site restoration facility.  Visitors will also be able to view neon tube benders in action at the sign shop of Neonworks, which inhabits an adjoining space.  The museum is closed to visitors while its collection is being transferred, but will re-open this coming June, 2012 (check here for details).  I could go on for volumes about how wonderful the American Sign Museum is, but I'll wrap this up and let the photos speak for themselves.  If you've read this far, you owe yourself a trip to Cincinnati to see the real thing.

THE AMERICAN SIGN MUSEUM is located at 1330 Monmouth Street in Cincinnati, Ohio.  It will re-open in June 2012. 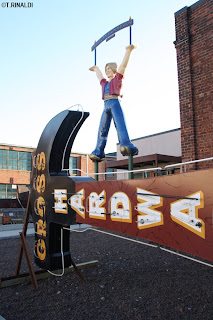 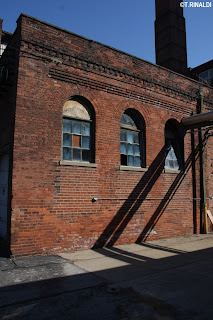 The sign museum's new home is part of a historic factory complex that once made women's clothing and parachutes. (T. Rinaldi) 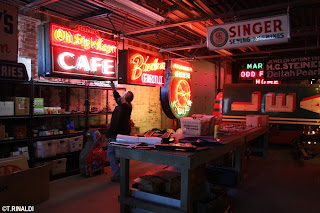 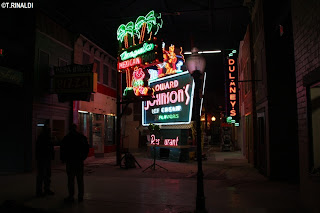 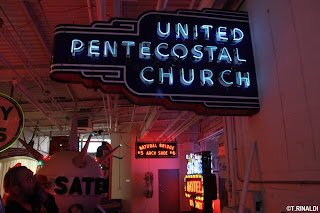 Signs waiting to be moved from the museum's old home. (T. Rinaldi) 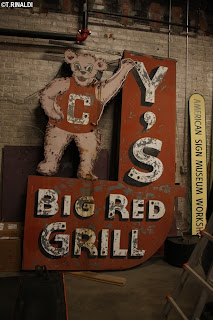 Johnny's Big Red Grill was a Cornell University institution in Ithaca, NY.  After the restaurant closed, the sign was reportedly sold on eBay to an alum, who, not realizing it was 20 feet high, subsequently sold it to the American Sign Museum where it is now in storage awaiting restoration.  (T. Rinaldi) 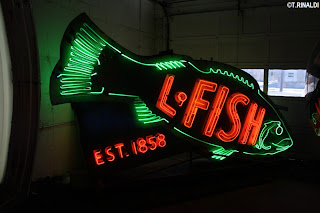 L. Fish - not a fishmonger but a furniture store, formerly in Chicago, Illinois. (T. Rinaldi) 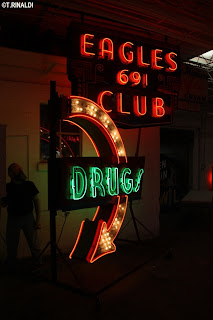 A pair of signs awaiting transfer to the museum's new location. (T. Rinaldi) 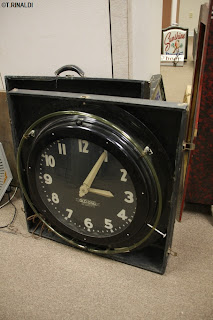 Other items in the museum's collection include this salesman's display for a Glo-Dial neon clock, an item that became a true 20th century American icon, typically installed at service stations. (T. Rinaldi) 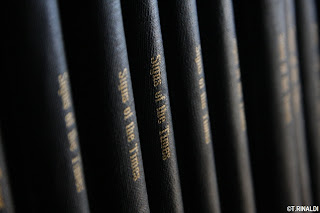 Back issues of Signs of the Times Magazine, at the ST Media Group headquarters. In print since 1906, this journal is truly an American treasure. (T. Rinaldi)

AND... OUTSIDE THE MUSEUM, A FEW SIGN SIGHTINGS IN
DOWNTOWN CINCINNATI 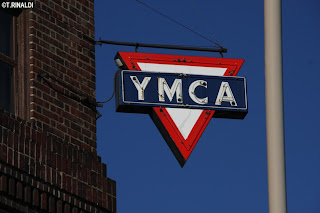 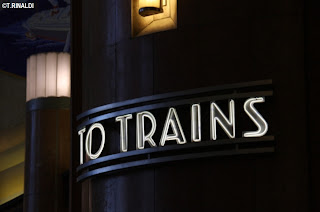 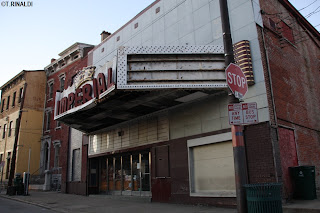 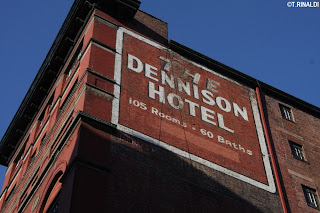 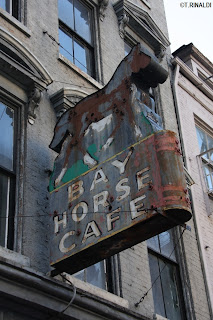 The Bay Horse Cafe, on Main not far from the Dennison. (T. Rinaldi) 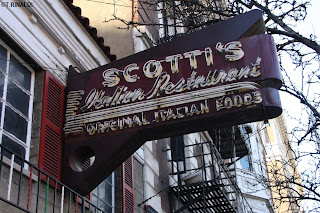 MANY THANKS to Tod and Wade Swormstedt for their help and hospitality.
Posted by T.E. Rinaldi at 8:07 PM