No news is usually good news on this here New York Neon blog – my reports often have to do with some great old sign being pulled off a wall somewhere.  In fact, New York lost three lovely old neon signs in recent weeks.  But first, the good news: the Artkraft Strauss Sign Corp. papers are now available for researchers at the New York Public Library. 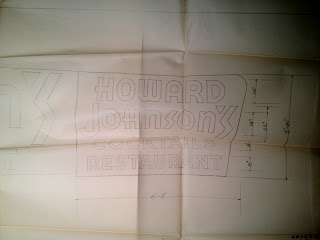 Original design drawings for the Howard Johnson's signs that held the corner of 46th and Broadway in Times Square from 1960 until about 1990, when they made way for replacement signs that finally vanished in 2006. (NYPL)
Artkraft Strauss was New York's preeminent maker of electric signs for most of the 20th century.  The company is known for having fabricated most of the blockbuster Times Square spectaculars erected between the 1930s and the 1990s.  But researchers will not find materials relating to Artkraft's Times Square mega-signs amongst the NYPL collection: the company sold these documents at auction in 2006 when it discontinued its sign fabrication and maintenance operations. 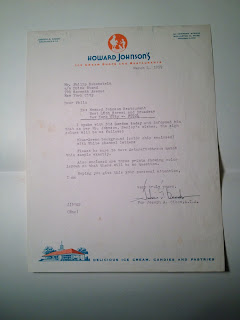 Correspondence from a HoJo staff architect dictating the color scheme for the Times Square signs. (NYPL)
Instead, the bulk of the files at the NYPL tell the story of Artkraft's more garden variety "on-premise" signs – theater marquees, roof signs for hotels and factories, and typical storefront signs.  In many ways, this body of work is more significant than the spectaculars, which are already well documented. 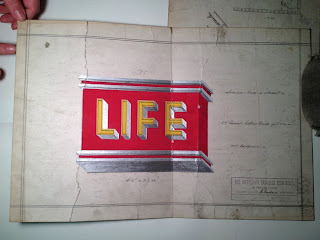 Before there was the Life Cafe, the Life Restaurant commissioned this design sketch for a sign that Artkraft may or may not have ever actually fabricated.  (NYPL)
The Artkraft Strauss papers at the NYPL offer representative examples of the what one might have found at typical sign shops in New York and elsewhere.  Better than any other resource I have found so far, these files tell the story of how the signs came to be.  All of the New York sign shops I've successfully contacted told me they discarded these materials long ago.  There are sketches and letters, formal design and shop drawings, maintenance contracts and photographs.
Just in time for the neon book, these materials helped me solve a nice handful of little mysteries, for example:
YES!  The big Blumstein Department Store sign on 125th Street was the work of Artkraft Strauss, as I suspected. 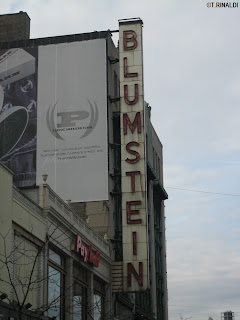 Artkraft's sign for Blumstein Dept. Store sign lorded over 125th Street in Harlem from 1936 until it was covered over around 2008. (T. Rinaldi)
NO! The "Music Hall" copy on the Radio City marquees was not originally its present yellow, as implied by reports stating the sign was "restored"  to its original colors, but red, as I remember seeing it when I was a kid.
YES! Artkraft Strauss indeed made the enormous Silvercup Bakery sign in Long Island City, in 1961-62, and re-lettered part of the sign to its present Silvercup Studios configuration twenty years later. 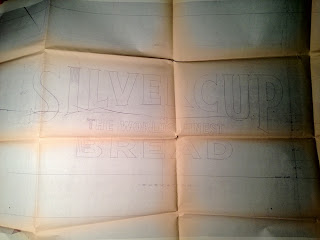 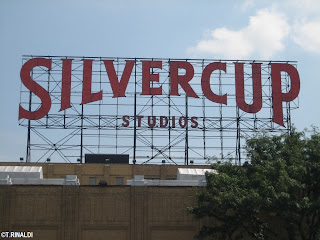 YES! The Loews Post Road Theater sign in the Bronx was among many Loews theater signs made by Artkraft throughout the New York area. 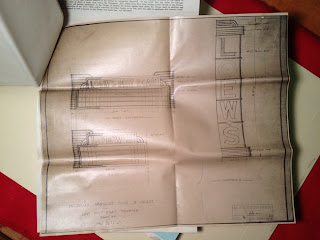 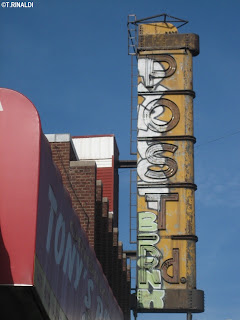 Original drawings for the Loew's Post Road Theatre signs, installed in 1939.  The vertical sign was later re-lettered when Loew's sold the theater, but remains in place today. (NYPL; T. Rinaldi)
YES! Artkraft also made the big Domino Sugar sign on the Williamsburg waterfront. 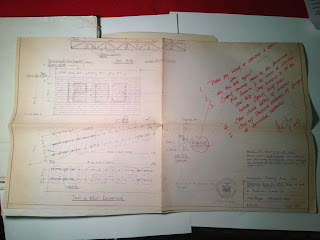 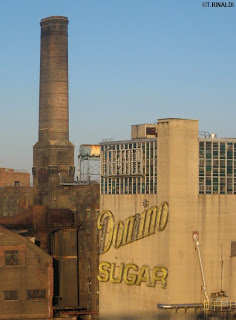 Drawings for Williamsburg's Domino Sugar spectacular (above) and the sign as it appears today (bottom).  This sign replaced an earlier display which stood atop the historic refinery building next door (at left in the photo).  (NYPL; T. Rinaldi)
HERE is a brief synopsis of the collection for anyone interested in visiting:


Artkraft Strauss donated the materials to the NYPL's Manuscripts and Archives Division between 2007 and 2010. The documents are nicely indexed in this finding aid, which is a searchable PDF. They are grouped into 4 sets or "series", including executive office files, management files, job files, and photographs. Of these, the highlight (for me anyway) was the "Job Files" (Series III), which is comprised mostly of manila folders each generally corresponding to a sign made by Artkraft Strauss. Some of the folders are pretty slim, holding say a single draft contract for a job that was never executed. Others are pay dirt, with design sketches, illustrative correspondence, and other materials that document the sign's whole production.

The collection can be viewed at the NYPL's Manuscripts and Archives Division, by appointment only. To make an appointment, researchers should fill out a short online application form. Manuscripts and Archives is located at the north end of the NYPL's main reading room on 42nd Street. The materials are grouped into boxes; researchers can request up to five boxes at a time, a maximum of three times a day (that means 15 boxes a day - click here to see the opening hours). Leave your Esterbrooks at home: it's pencils only here. Photocopies can be made by staff only – visitors must make a log of what they want copied.
MANY THANKS to Tal Nadan at the NYPL.

AND NOW, THE BAD NEWS:

• From the Lost City blog, the super wonderful old sign of the Crown Deli Caterers in Borough Park has vanished (as has the deli).  A pretty cool new sign has appeared to advertise the storefront's new occupant (not a bank or a Starbucks but an ice cream parlor), but one hopes the old sign found a good home somewhere.
• Also from Lost City, the lovely streamlined marquee of the old Earle/Eagle theater in Jackson Heights is gone.  This was one of the very last vintage movie theater marquees anywhere in New York.
• Finally, via Kyle in Astoria - Walter's Hardware has gone and now so too has their sign.
Posted by T.E. Rinaldi at 9:03 PM