This Wednesday, November 9, 2011, will mark exactly one hundred years since Georges Claude filed his "System of Illuminating by Luminescent Tubes" at the U.S. Patent Office.  This event arguably marked the birth of neon illumination in the United States (Claude filed the same patent in his native France in November 1910).  "Arguable" is the operative word here:  despite their immense impact on the built landscape, the origins of neon signs are murky at best. 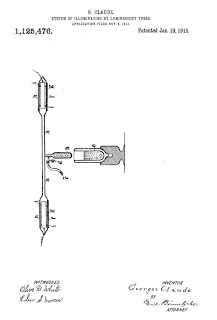 Georges Claude's claim as the originator of neon signs in the United States rested on Patent No. 1,125,476, filed November 9, 1911. (freepatentsonline.com; click here to see the whole patent)
The U.S. Patent Office had multiple reservations about Claude's application, and did not issue his patent until January 19, 1915, more than three years later.  By his own account, Claude did not exhibit his neon lights in the U.S. until 1913.  Claude's signs appeared in Paris before World War I, but his first American sale did not come until 1923.  His U.S. patents were besieged by law suits all through the 1920s: various inventors claimed to have created neon signs in the U.S. as early as 1909, and Claude's system was predicated on developments by the American inventor D. McFarlan Moore. 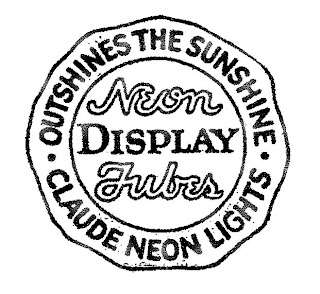 But this is hardly the occasion to dwell on doubts over Claude's status as the "inventor" of neon signs, or other silly details, like his collaboration with the Nazis during the Second World War, and subsequent imprisonment (we'll get into that another day).  On this anniversary, I thought it would be nice to tally up some of Claude's signs that still survive in New York, or that survived until recently.

In a 1927 advertisement, Claude Neon Lights of New York claimed to have produced 611 of 750 neon installations that then existed in New York.  Claude fabricated some signs at its own plant, which was located in Long Island City, and some in collaboration with other sign shops that operated as Claude-licensed affiliates; non-licensed shops were invariably sued by Claude.   The most prominent Claude licensee in New York was Strauss & Co., predecessor of the famous Artkraft Strauss Sign Corp.  A number of early neon signs by Strauss / Artkraft Strauss survive and can be partly attributed to Claude.  Strauss had a contract to do signs for all Loew's movie theaters in the New York area, and a few Loew's signs from this period survive in the city.  Only one of these – the sign at the Loew's Paradise Theatre in the Bronx, possibly New York’s oldest neon sign – remains functional. 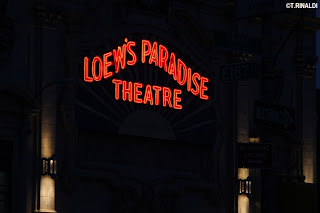 Fascia sign of the Loew's Paradise Theatre in the Bronx, likely the work of Claude Neon / Strauss & Co. Installed in 1929, this is possibly the oldest surviving neon sign in New York today.  (T.Rinaldi)
Until relatively recently, one Claude sign (at least I think it was made by Claude) hung over a former Longchamp's restaurant on Madison Avenue and 49th Street.  I couldn't quite make out the lettering on the tiny plaque at the bottom of the sign, but it looked like it said "Claude Neon", and this helpful tidbit from the internet seems to back that up.  The sign disappeared in 2006, taking its little manufacturer's tag with it. 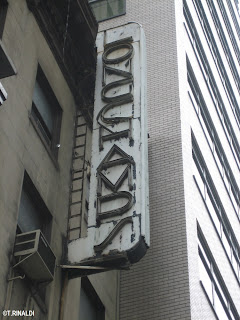 At least two other Claude signs remain in New York: the long-dark roof sign over Tudor City on East 42nd Street, which Claude erected in 1939 (more on this in another post), and the great neon clock at the former Williamsburgh Savings Bank tower in Brooklyn, installed in 1929.  In Claude Neon's house organ, the Claude Neon News, the company described this latter installation as "the largest four-faced illuminated clock in the world," with hour- and minute-hands 12- and 17-feet long, respectively, and a total diameter of 27 feet.  The Loew's Paradise not withstanding, this is probably the last functioning Claude display in the five boroughs today (when it functions, that is). 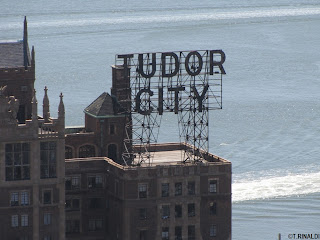 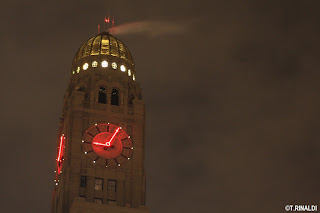 If Claude may not have truly invented the neon sign, he unquestionably deserves credit for making neon illumination a commercially viable industry, one that made an indelible mark on the built landscape of the 20th century.  Yet his dominance of the neon business was short-lived: in the 1930s, Claude's critical patent expired.  In New York, smaller sign shops soon wrested the lion's share of the neon trade from Claude. One such shop, the Serota Sign Corp., purchased Claude's New York operation in the midst of the Second World War.  Claude himself died in 1960, aged 89, his record as an inventor still overshadowed by his collaboration with the Nazis during the War.  But traces of his work survive.  In addition to the signs pictured here, there are a handful of old Claude Neon franchises around the world that actually still retain the Claude name in 2011.  And Claude Neon's parent company, the French industrial gas supplier Air Liquide, is still alive and well, Fortune 500-listed nearly 110 years after Georges Claude co-founded it in 1902.

• Word (by way of Jeremiah's Vanishing New York) on salvation for the Coney Island Bialy Bakery, and for its great neon sign, made by the Salzman Sign Co. c. 1959.