M is for Missing

The big M over the Milford Plaza is gone.  It appears to have come down sometime in the past few weeks.  With the old hotel undergoing a major renovation, I wondered what would become of its nice ensemble of old neon signs, which preside over 8th Avenue just west of Times Square.  In addition to the roof sign, part of which remains, the hotel also has a pair of large vertical signs, one on each side. 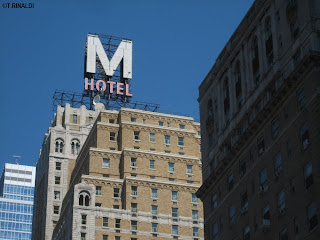 The late, great M, recently departed from the roof of the Milford Plaza. (T. Rinaldi)

A little history: as installed, the giant M stood not for "Milford", as one might suppose, but for "Manhattan" – Hotel Manhattan, to be exact.  It first appeared here in 1958, the work of none other than the Artkraft Strauss Sign Corp, which had installed the great Pepsi-Cola spectacular over the Bond Building at Times Square just two years earlier. 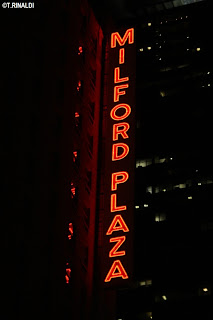 One of the Milford’s two vertical signs, each 8 stories high. (T. Rinaldi)

The Manhattan's big M was the spiritual descendant of an earlier roof sign erected in the same spot when the building first opened as the Hotel Lincoln three decades earlier. Designed by architects Schwartz & Gross and built by Irwin S. Chanin (developer of the great Chanin Building, among many others), the Lincoln opened its doors on February 13, 1928, in commemoration of what would have been Honest Abe's 119th birthday (actually the day before).  Then-Governor Al Smith pressed a button to light the building’s original mast-like roof sign from the state capital in Albany during the opening ceremony. 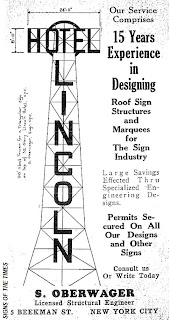 The Lincoln’s original roof sign. (Signs of the Times, May 1932)

The Lincoln's original roof sign scored a brief cameo in the title sequence of the 1933 film adaptation of 42nd Street.  It was engineered by Sol Oberwager, a longtime fixture in the New York sign business who later became one of the city's most active sign-and-awning permit expediters, handling paperwork for a significant percentage of all illuminated signs erected throughout the city from the 1930s through the 1950s (including the Apollo Theater and Hotel New Yorker, among many others). 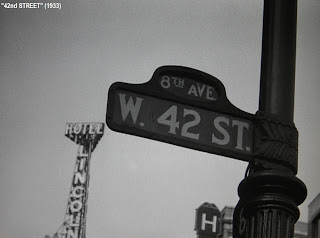 The Lincoln’s original roof sign made a cameo in the 1933 film adaptation of 42nd Street.  The “H” at bottom belongs to the Hotel Times Square. (Frame enlargement, 42nd Street)

The original sign made way for the big M in 1958, when the Lincoln re-opened as the Hotel Manhattan.  Though it looked a little dull in recent years, the sign must have been a sight to behold when it debuted, clad in more than a mile of neon tubing that changed color in animated sequence.  A horizontal sign reading HOTEL MANHATTAN stood at its base.  "The Hotel Manhattan . . . has several beautiful signs to mark its spot," reported Signs of the Times magazine: "one on the roof has a 31-foot wide and 12-foot deep 'M' visible for 20 miles, [with] 6,500 feet of neon tubing in colors changing from white and gold to shades of blue." 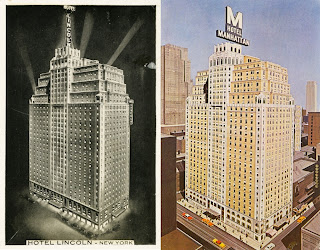 The Lincoln became the Manhattan in 1958.

The roof sign survived the hotel's transformation into the Milford Plaza in 1980 (the new management simply removed the letters MANHATTAN from beneath the big M and left the rest).   At some point, the M was stripped of its neon and lit by floodlights shining up from below.  The old vertical signs on the north and south facades meanwhile were re-lettered to reflect the hotel's new name.  As neon hotel signs in New York grew increasingly scarce, the Milford remained one of the last places in the city where you could book a room with that iconic glow out your window. 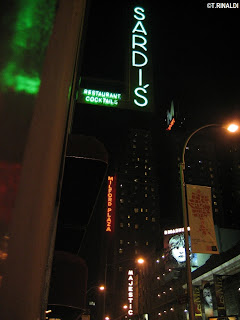 What comes next for the Milford's roof sign remains unclear.  Under new management (Highgate Holdings), the place is undergoing an extensive makeover, with slick new décor – some of it even incorporating a big capital "M" very much like the one that just came down from up top.  Does this hint at a new big M for the roof?  A restoration to the sign’s 1958 splendor, perhaps?  Or a replica of Sol Oberwager's 1928 original?  Word from the Milford's new management is that a revamped sign of one form or another is on its way, but the design is still in the works.  For now, it's wait and see.

IN OTHER NEON NEWS:
• Fedora Dorato, former proprietor of Fedora Restaurant on West 4th Street, has passed away (from Marty via JVNY).
• Rocco Restaurant, at 181 Thompson Street, poised to disappear after 89 years, leaving the future of one of New York’s earliest neon signs (installed 1934) in doubt.
• The lovely vertical sign at Alex Liquor Store in Washington Heights has gone to a private collector.
• Cambridge Liquor's classic vertical sign appears to be getting a facelift, tubes removed and sheet metal painted black.