The Ziegfeld Theatre called it quits last week after nearly 47 years on West 54th Street.   Opened in 1969, the Ziegfeld stood in the shadow of a big bland glass and steel office tower and, moreover, of its namesake theater, which was destroyed to make way for that tower in the mid-1960s.  Though the latter-day Ziegfeld never really escaped the shadow of its illustrious predecessor, it was not without its charms - its kitschy, Pat Nixon-meets-Diamond Lil, gay-90s-bordello decor that survived intact as a kind of freeze-frame of the day and age from which it sprang. 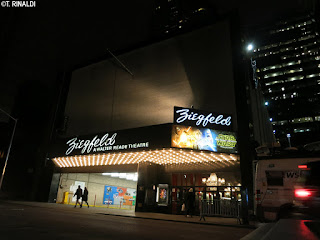 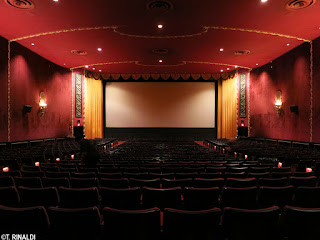 The Ziegfeld, outside and in.

Its neon, too, is worthy of study as a period piece.  For the purposes of my book and blog, the Ziegfeld fell outside of my scope for the simple reason that its signs concealed their neon behind acrylic lenses.  In this, the Ziegfeld's signs were in step with their times:  by the mid-1960s, neon had fallen decidedly out of favor, and the popular trend away from exposed tube signs changed the aesthetic of the commercial landscape everywhere. 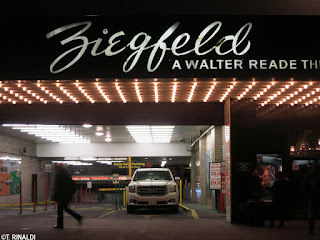 In New York Neon, I trace the chronology of this change and explore the fascinating psychology behind it.  From heights of vogue in the early 1930s, neon's appeal began to suffer even before WWII.  Big corporations, which had fueled the explosion of the neon business in the 1920s, began to dump neon by the late 1930s.  Plexiglas became commercially available in 1936; design requirements at the 1939 New York World's Fair discouraged the use of exposed tube neon signs. 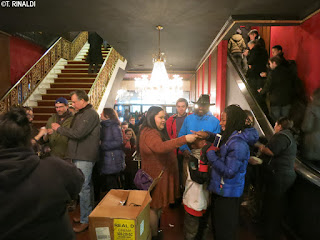 The crowd pours in for the Ziegfeld's final screening last Thursday.

Particularly for small, independent businesses, neon storefront signs maintained a certain look through the 1950s, typified by what I call "pre-Helvetica" letterforms wrought in exposed neon tubes.  But this began to change by the early 1950s.  Chain businesses and corporate franchises led the way.  In 1953, Nedick's began to re-equip its New York locations with acrylic panel fascia signs.  Three years later, Woolworth's introduced a new program of plastic-clad signs to be installed at its five-and-dime stores nationwide.  By the mid-to-late 60s, exposed tube neon signs were down and out. 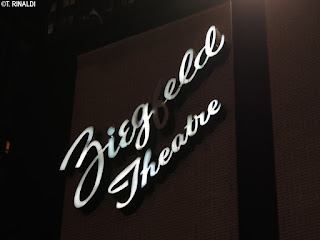 Enter the Ziegfeld.  Like so many banks and chain drug stores of the period, its signs conscientiously abandoned the neon-bedecked aesthetic that characterized movie theater marquees of the previous generation.  (As its NYT obit pointed out, the Ziegfeld was "the first major new movie house in Midtown Manhattan since Radio City Music Hall opened in 1932.")  But with their jaunty script letterforms, their old-world spelling of the word "theatre," the signs had one foot in the pre-Helvetica landscape of the early 60s, marking them as products of the changing times into which they were born. 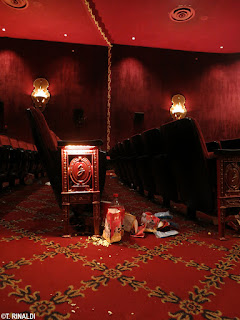 Much as I loved going there, it always struck me that the Ziegfeld must have been something of a bitter pill to swallow for those who had admired its predecessor and the other old movie palaces of New York that had already begun to disappear en masse back in the 60s.  None of those grand old pre-war theaters survives intact as a dedicated cinema in New York today, so the Ziegfeld was about the best thing we had.  And after nearly a half century, it had taken on its own authenticity, and in fact even outlived its predecessor (the old Ziegfeld lasted just 41 years).  Arguably the best place to see a movie in New York, it was certainly the most fun.  The Times reports that the former Ziegfeld will re-open as an event space catering to "galas and corporate functions" next year.