Lights Out 2015: Signs We Lost This Year

Another year, another litany of lost neon.  I can't quite tell whether 2015's losses were less painful than those of previous years, or if I've just become desensitized after so many years of small businesses carnage in New York.  As we mark this year's casualties, let's resolve to celebrate and protect what we have left in the year ahead. 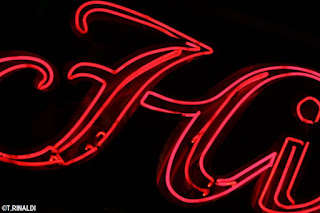 
It is almost a relief to report that the long, torturous death of this once-lovely neighborhood institution has finally run its course in Bay Ridge, Brooklyn.  The last of Hinsch's old neon, until recently one of the most splendid ensembles of midcentury signage anywhere in New York, disappeared earlier this year.  In a could-be-worse turn of events, the space now belongs to a Stewart's ice cream franchise. 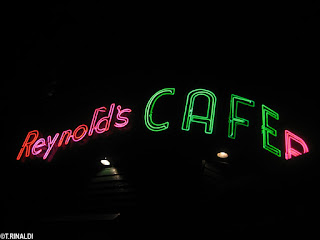 Reynold's was well worth the trip uptown for its quietly atmospheric surrounds and, of course, for its exceptionally stirring neon, which wrapped the northwesterly corner of Broadway and West 180th Street from time immemorial.  The bar tenders hung up their white aprons this past March. 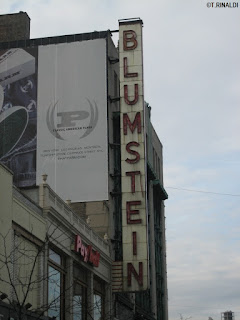 
Long after the departure of this Harlem department store, Blumstein's enormous streamlined neon sign remained as an evocative relic from the days when 125th Street shimmered in neon glory. The sign was the work of Artkraft Strauss, makers of most of the iconic Times Square spectaculars of the 20th Century.  More recently clad in newer signage for Touro College, the whole thing finally came down about a year ago. 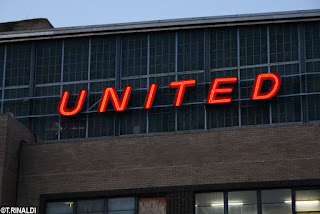 In an world where corporate branding meticulously erases all traces of its own past, United's ancient neon lettering beaming out over the taxi corral at LaGuardia survived against all the odds.  The sign finally vanished about a year ago when the Port Authority leveled the historic (1939) hangers behind it.  Equally improbable relic signs for American Airlines survive nearby, for now. 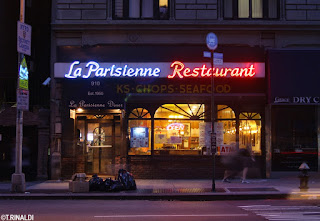 This humble coffee shop offered a haven of down-to-earth hospitality in a part of midtown Manhattan where ultra-high rents leave almost no room for even remotely ephemeral parts of the urban landscape.  La Parisienne bid adieu back in February. 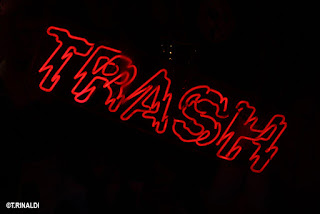 Trash & Vaudeville, celebrated "punk rock mainstay" of the East Village, is set to wrap-up a 40-year run on St. Mark's Place imminently. The fringe clothier has reportedly secured another space in the neighborhood. 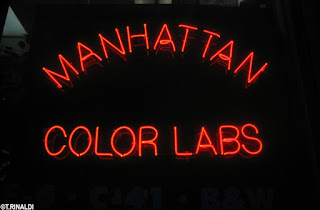 Manhattan Color Labs actually seems to have closed back in July 2014.  Its disappearance perhaps speaks more to the ascent of digital photography than to the challenges faced by New York's small business owners. 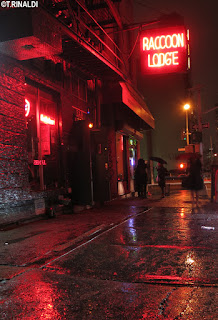 The Raccoon Lodge and its sign seem far older than their 33 years, suggesting an apple fallen nigh in the shade of some spiritual ancestor.  An under-age visit to this establishment back in my own wayward youth is perhaps what crystallized the affection I harbor for the signs to which this blog is dedicated.      The Raccoon will pack it in on New Year's Eve. The entire block is slated to be bulldozed to make way for a luxury residential high rise.

PREVIOUSLY IN THIS SERIES: