While strolling down Broad Street in lower Manhattan just before Christmas, something caught my eye - an old sign, of course.  A big vertical sign, lording over the corner of Broad and Stone streets, a remnant, apparently, of a vanished pizzeria called Giuliano's. 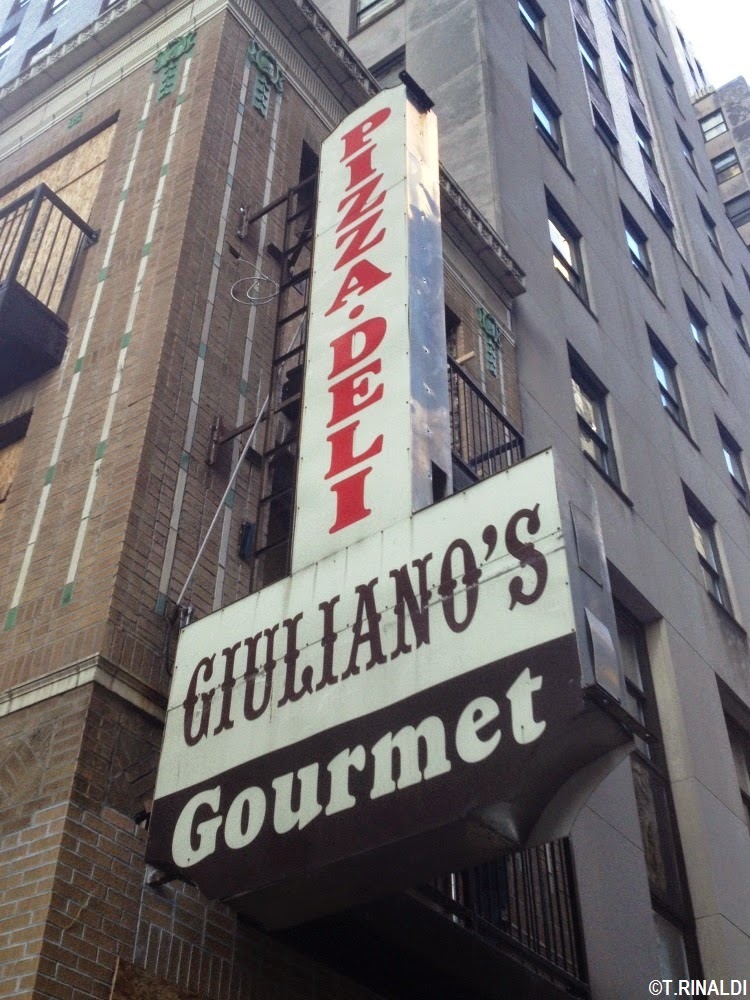 
One look at this old sign and just about anyone can tell there's more to the story.  The sign faces are relatively new; they've clearly been tacked onto an older sign beneath them.  The sides of the framework are clad in stainless steel - that classic sign material of the neon era, unseen in signs made for most of the past 50 years.  To my twisted mind, relics like these are almost more interesting than those old signs that remain unmolested.  Here, in a part of town with little else to offer in the way of neon archeology, I suddenly had a little lunch hour mystery to solve. 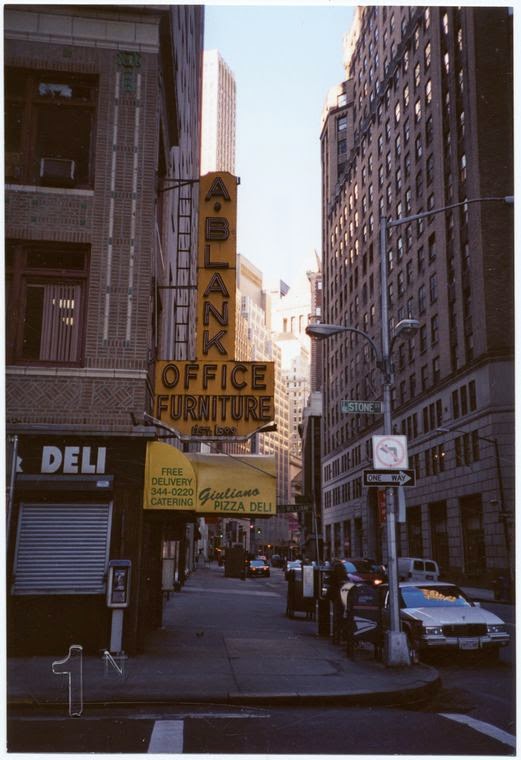 Minutes later, mystery solved - thanks to the New York Public Library's newly-revamed Digital Collections archive.  The magic bullet photo came from an archive curiously called  "Drugstore Photographs, or a Trip Along the Yangtze River," featuring the work of photographer Dylan Stone.  This particular collection, says the NYPL, is a "comprehensive recording of . . . the buildings existing below Canal Street" as they existed in 1999.  As for the title, says Mr. Stone: "I take the shot film to be developed at a drugstore, which returns the processed film in an envelope advertising 'A Trip Along the Yangtze River.'" 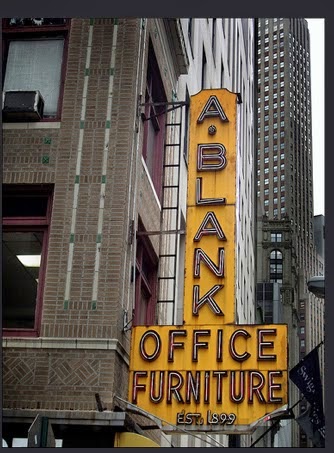 Getting back to that mysterious sign: Mr. Stone's photo reveals that it previously advertised a business called A. Blank Office Furniture, which, as the sign formerly proclaimed in neon, had been around since 1899.  The Internet (ahem) draws a bit of a "blank" on Blank's.  The business seems to have made way for Giuliano's by the time Mr. Stone passed by here in 1999.

DOB records indicate a 1958 installation date for the sign, which looks about right. It featured stainless steel channel letters mounted to a canary yellow porcelain enameled sign face, just like the still extant sign at the Papaya King on the Upper East Side.  Blank's sign appears to have remained in its original neon form at least as late as 2006 - a handful of photos taken that year show it with neon still intact.  Somehow I never noticed it until that day this past December, by which time the old letters had been stripped and those cheap new sign faces slapped over the old framework.  Is it possible that I really never strolled past here in all these years?  Or did this old thing just get lost in the busy backdrop of lower Manhattan?

In any case, the building behind it is in the midst of a gut-reno, suggesting that Blank's reliquary neon may not be long for this world.

• In Long Island City, Silvercup Studios is plotting a billion-dollar expansion.  What this means for the landmark Silvercup roof sign is unclear - some renderings show it relocated to the waterfront a-la Pepsi - but the local Community Board has gone on record with a request that the developer "use original and not modern materials when constructing the Silvercup sign to preserve the historic nature." The sign is not a protected New York City landmark.
• Check out Recapturist, a commercial archeology documentation project by Bill Rose.