Lights Out 2014: Signs We Lost This Year

2014 started as a quiet year in the world of vanishing neon.  But things picked up over the summer, leaving us at year's end with a miserable tale of loss and woe.  In keeping with previous years, 2014 yielded more than 15 notable neon casualties, up from the dozen or so we've lost each of the last few years (see "Lights Out 2011 / 2012 / 2013").  This year's losses seemed especially painful, including some of the city's best landmark neon.  A few of the signs we lost this year have been earmarked for preservation in one form or another. The Famous Oyster Bar signs even resurfaced (partially) within the year.  The rest, however, are bitter pills to swallow. 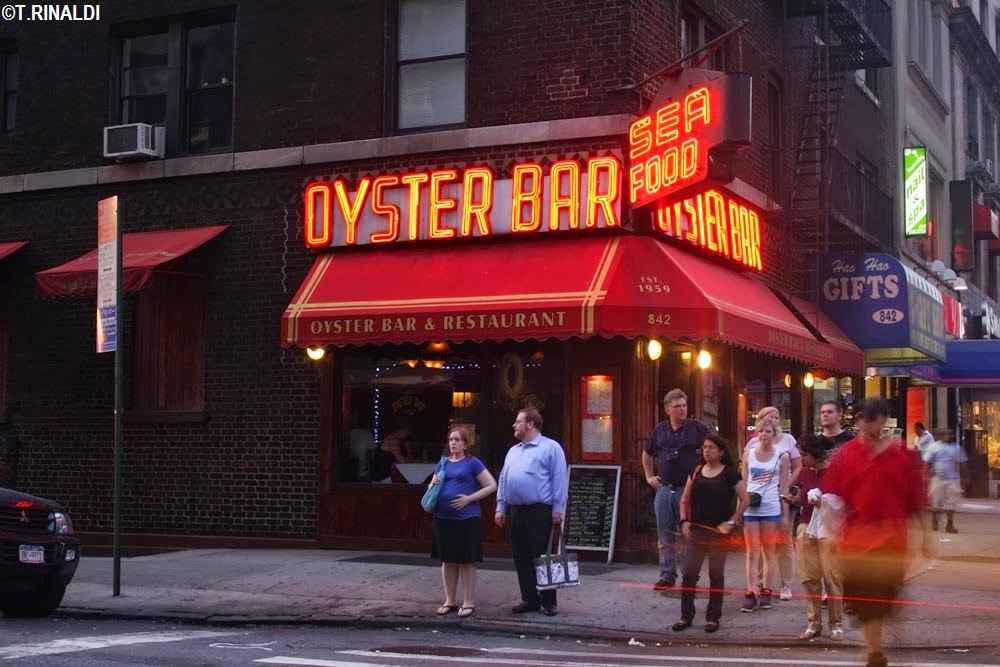 Manhattan's self-proclaimed "Famous Oyster Bar" closed in February after more than five decades in midtown.  Happily, its pair of fascia signs soon reappeared downtown at the Grey Lady.  Previously the signs faced southeast from the corner of 54th and Seventh; now they face northwest at Delancey and Allen.  The "SEA FOOD" swing sign however remains at large. 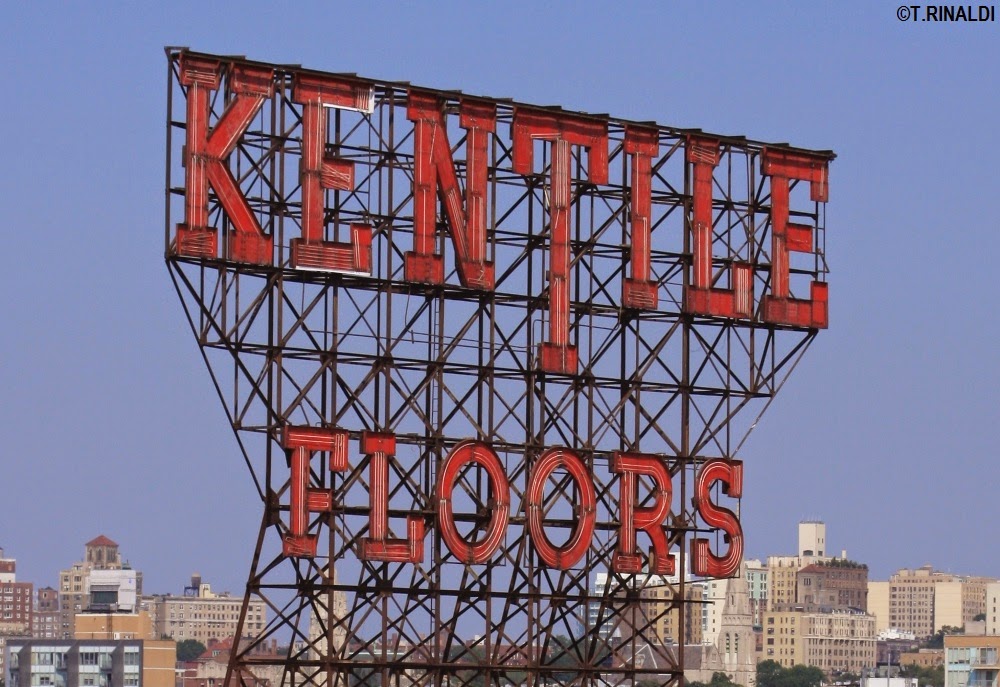 Kentile's disappearance in mid-summer spurred probably the most vocal reaction to any disappearance of any neon sign ever in New York.  A group called "Save Kentile" formed to try to preserve the landmark roof sign, a landmark Gowanus for more than 60 years.  Councilman Brad Lander brokered a deal to have the giant letters preserved for future re-installation; they were last seen in the custody of the Gowanus Alliance, a local business improvement nonprofit that tucked them away in storage.  While details on the sign's rebirth remain elusive, the Gowanus Alliance brought out the giant "K" for a holiday photo-op just before Christmas 2014. 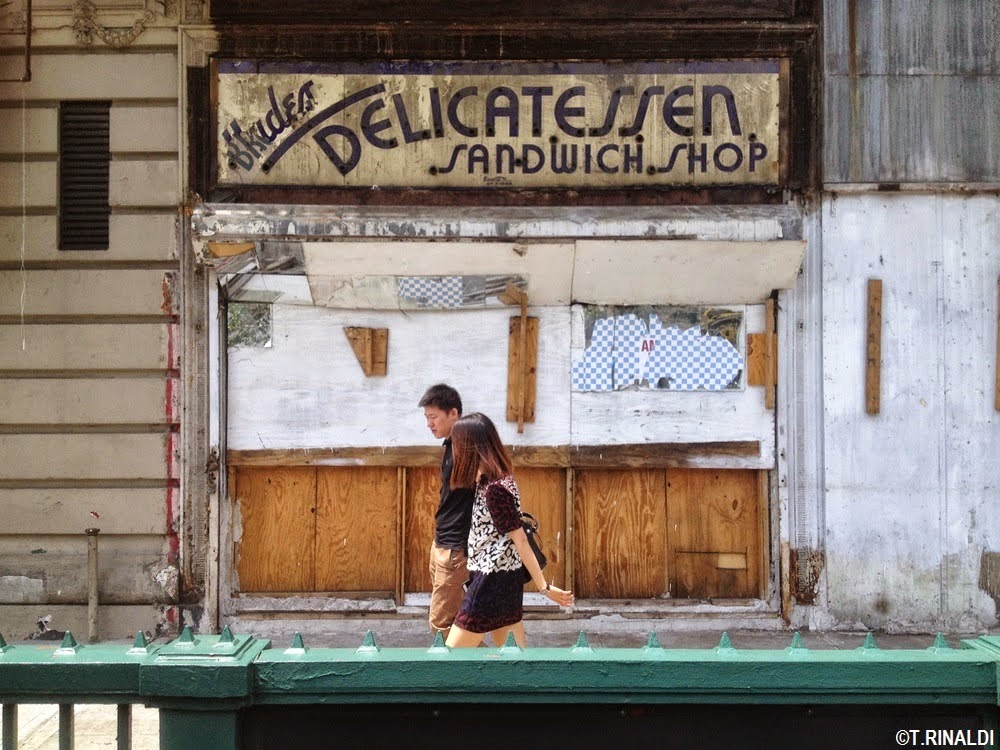 The re-appearance of long hidden signage for Hude's Broadway Delicatessen on the Upper West Side stirred some serious excitement over the summer, with write-ups in all the local papers.  Alas, the sign disappeared quietly a few weeks later, apparently salvaged, but whereabouts unknown. 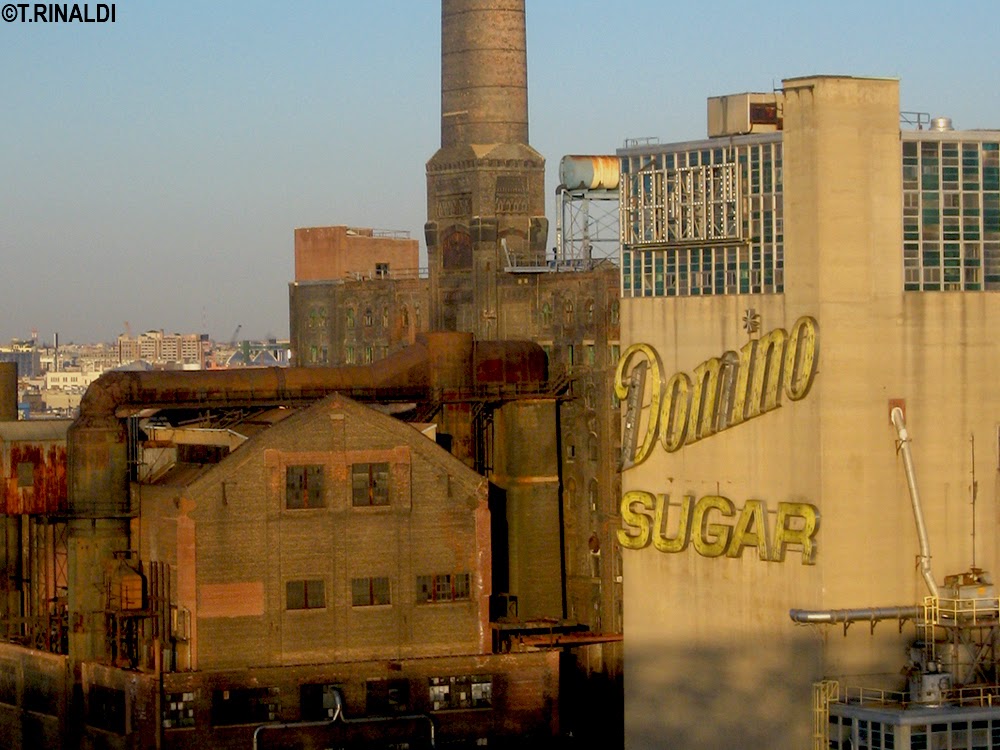 "Falling like Domino," one might say:  after a prolonged dormancy, the long-projected demolition of the former Domino Sugar plant in Williamsburg finally kicked into high gear this autumn.  On orders from the city's Landmarks Commission, the developers have spared just the core of this historic industrial complex; the plant's huge neon sign came down with a neighboring addition in November.  The sign is slated for re-installation, a-la Long Island City's Pepsi Sign or Jersey City's Colgate Clock. 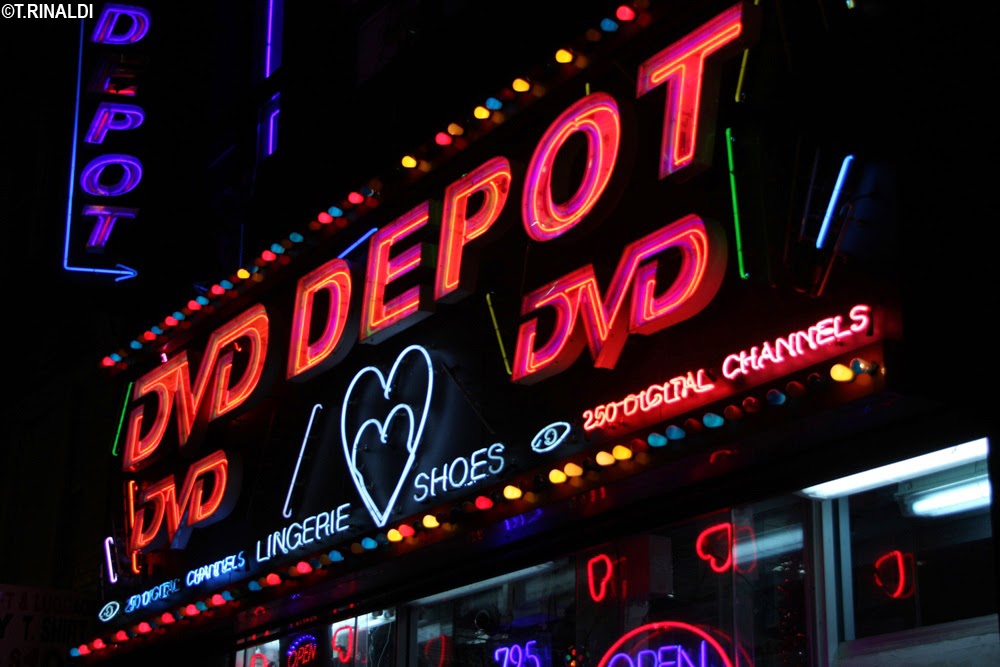 Not an old sign but a favorite nonetheless, with unabashed showmanship and animated splendor that evoked signs of decades past, DVD Depot was a real stalwart of urban grit just west of Times Square.  Sadly, we noted its loss this summer.  Say what you want about taste, the Eighth Avenue nights are darker for its absence. 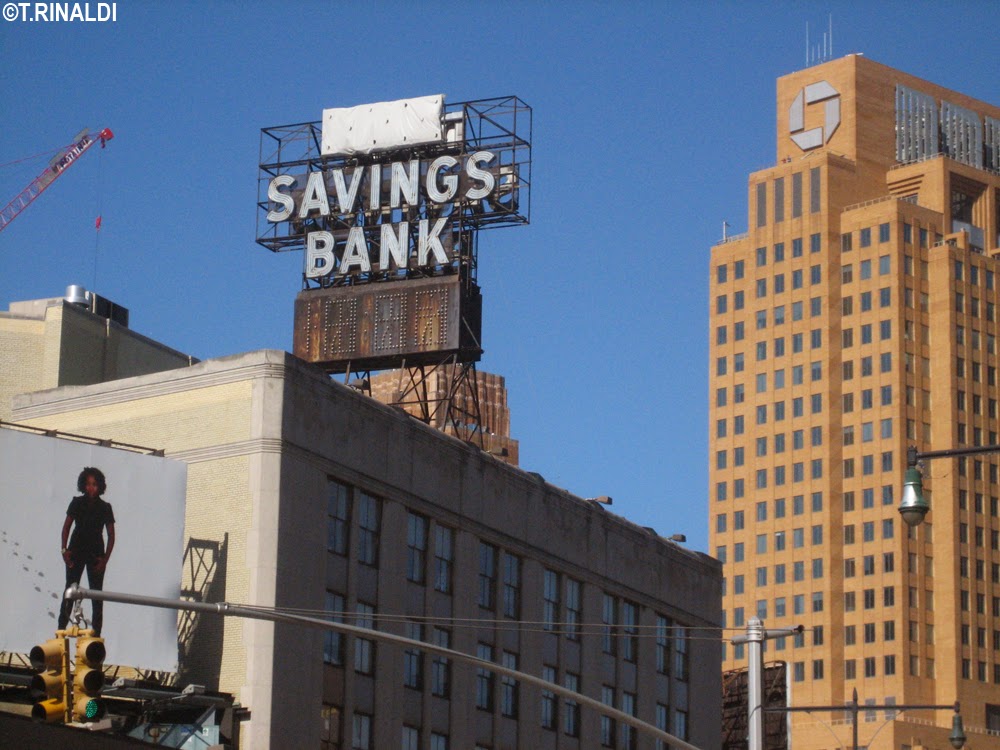 This grandiose roof sign for Dime Savings Bank lorded over Flatbush Avenue in downtown Brooklyn for decades.  It's gone now, but a new Chase sign has taken its place amid a forest of beanstalk towers rising around it. 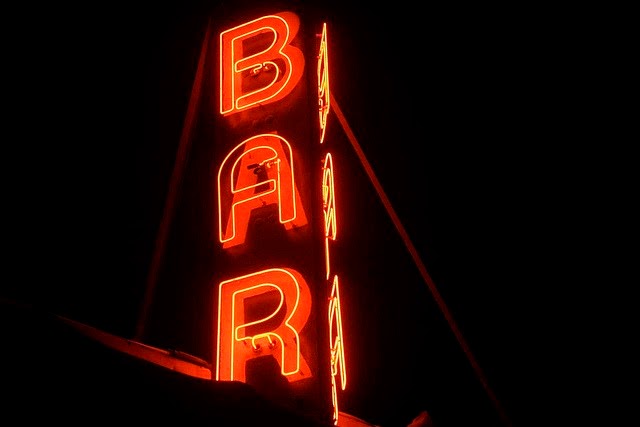 A neighborhood classic, Lorraine's BAR sign has vanished from Unionport Road (actually, a bartender reports that the sign was in fact a casualty of Hurricane Sandy).  Happily, the bar beneath it survives. 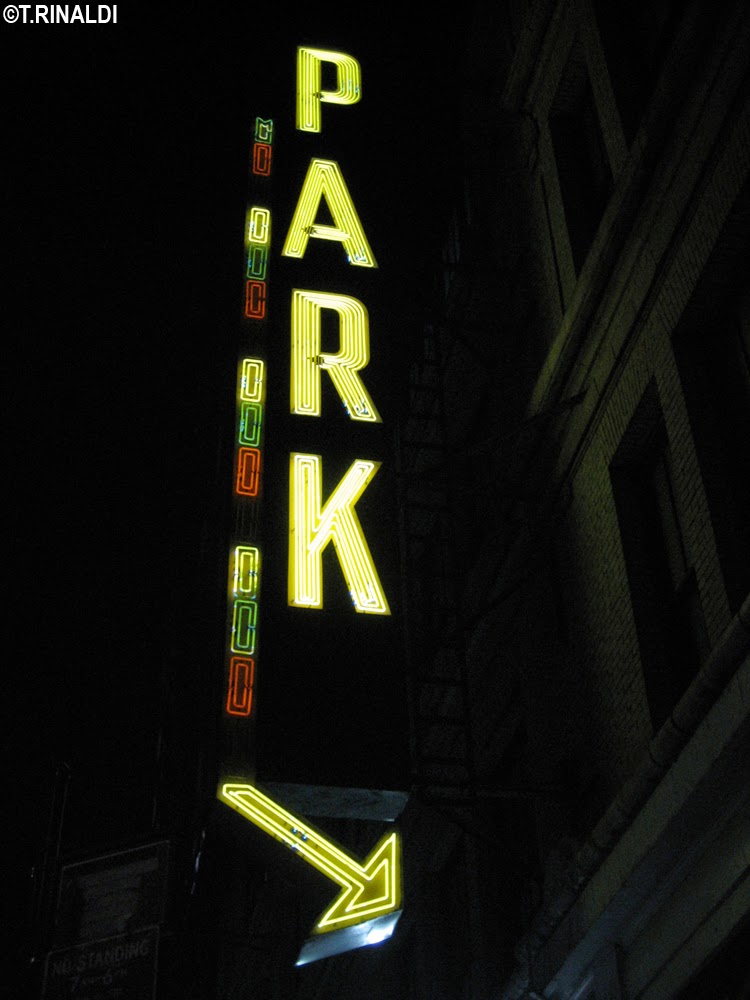 Darkened but not gone (yet):  Central Parking's giant animated arrow was a holdout, brightening the gritty sidestreets by the brooding Port Authority Bus Terminal.   The early 20th century garage shuttered this year, with plans afoot to level it and build a new tower in its place. 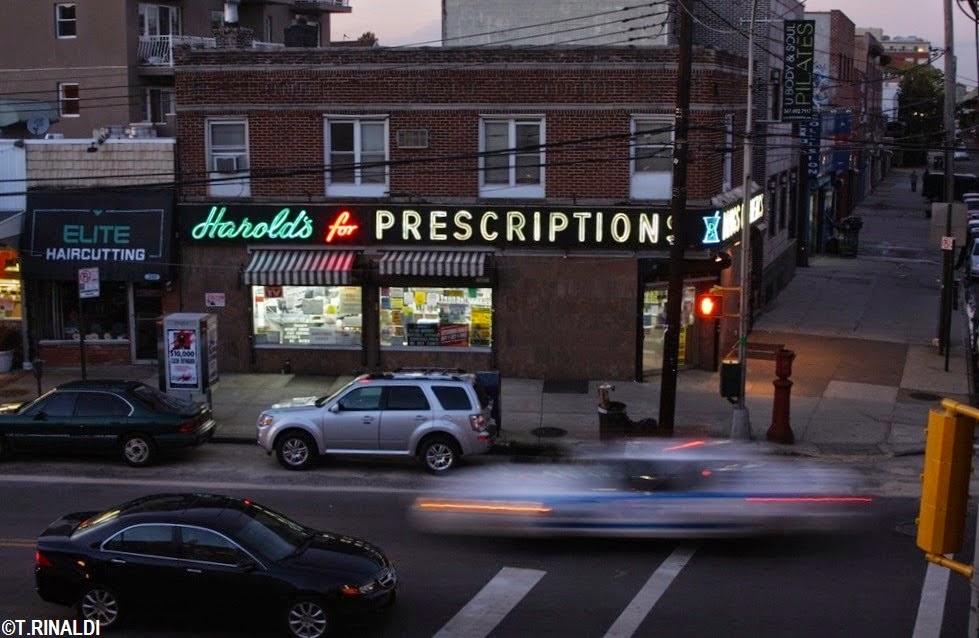 Usually, the disappearance of an old sign means the disappearance of a stalwart neighborhood institution. But sometimes, the story is just that an old business decided it was time for an ill-advised makeover.  This, sadly, is what happened over the summer at Harold's for Prescriptions, in Gravesend, Brooklyn.  The old neighborhood drugstore is still there, but one of Brooklyn's finest old storefront signs is obliterated, entombed beneath generic new signage installed over it. 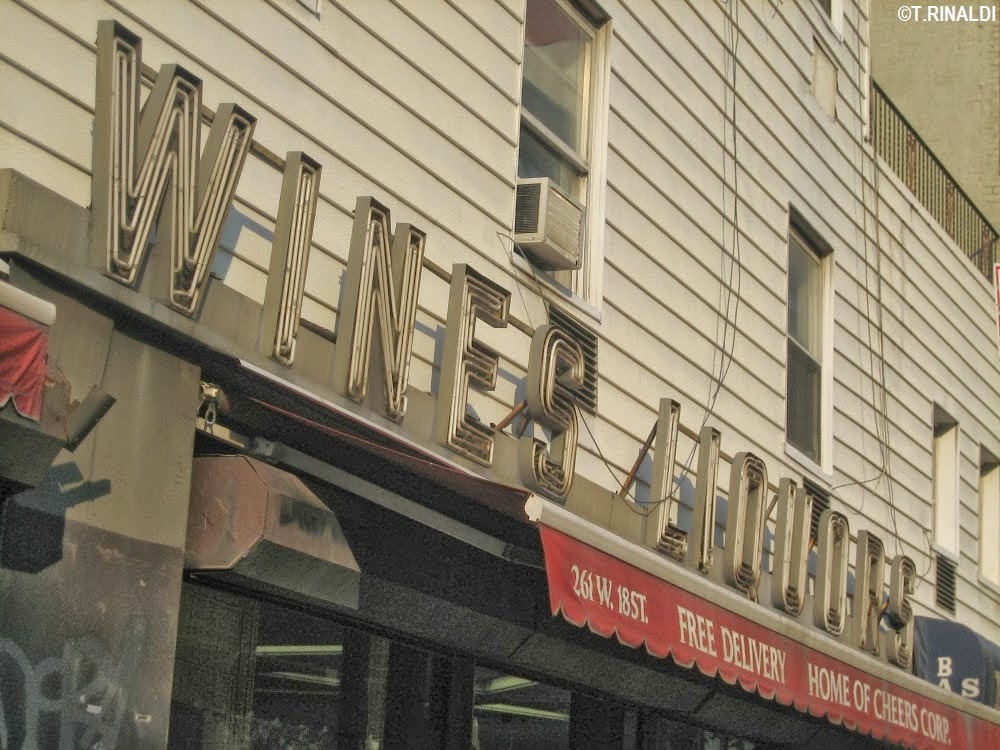 Home of Cheers Wine and Liquors lost its lease earlier this year; happily they found a new storefront further up Eighth Avenue in Chelsea.  Unhappily, however, its pair of old signs didn't come with them.  The "WINES LIQUORS" raceway sign has since vanished with the opening of a fancy new gelatto place in Cheers' former storefront over the summer, but the vertical sign remains in place, for now. 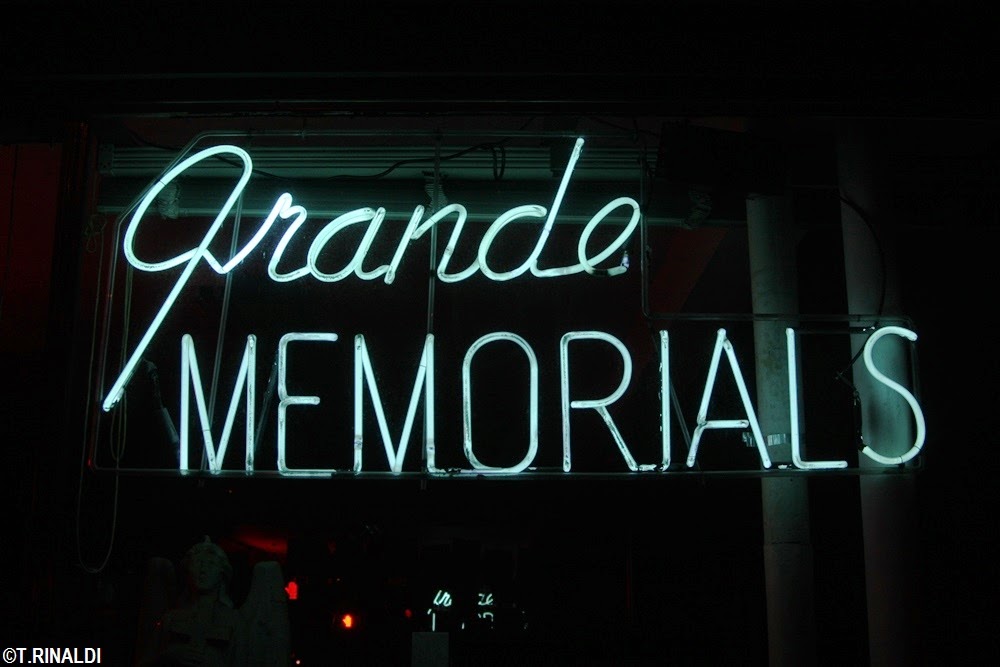 Jeremiah's Vanishing New York reported earlier this month on the disappearance of Grande Memorials, on Grand Street in Williamsburg, Brooklyn.  The store hasn't so much disappeared as re-located (to 7803 17th Avenue) – whether their great neon window signs went with them we do not as yet know. 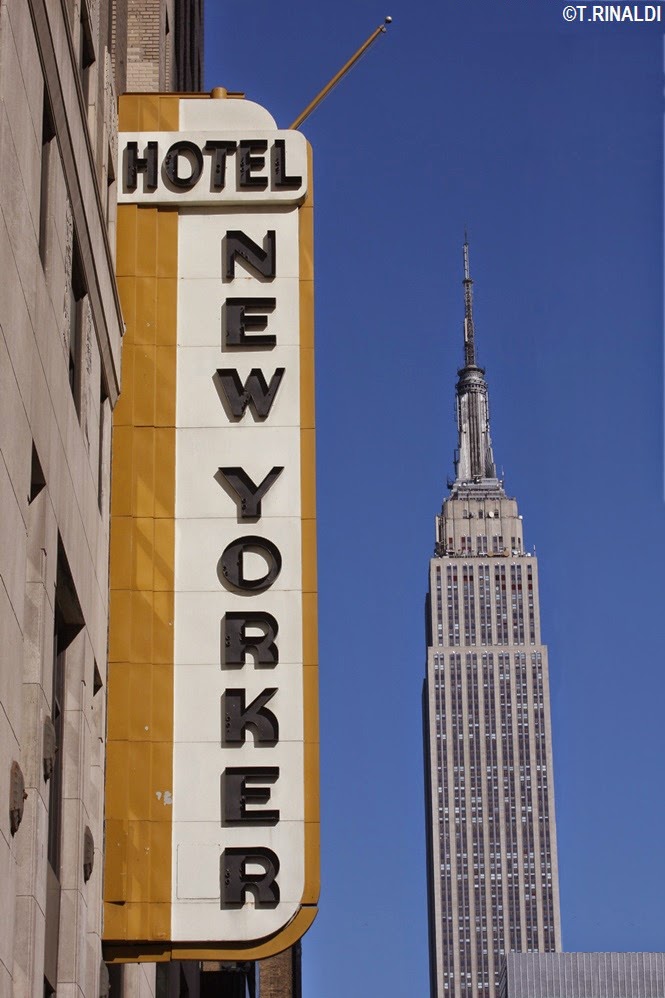 The New Yorker is known for its enormous roof sign, but it also sported a great pair of old neon blade signs down at the street level - until this month.  DOB records tell us that these signs had been there since the time of the 1939 World's Fair, and the signs show up in the city's c. 1940 tax photos.  They hadn't lit up in years, but were still some of my favorite neon relics in town.  They're gone now, displaced by LED replacements. 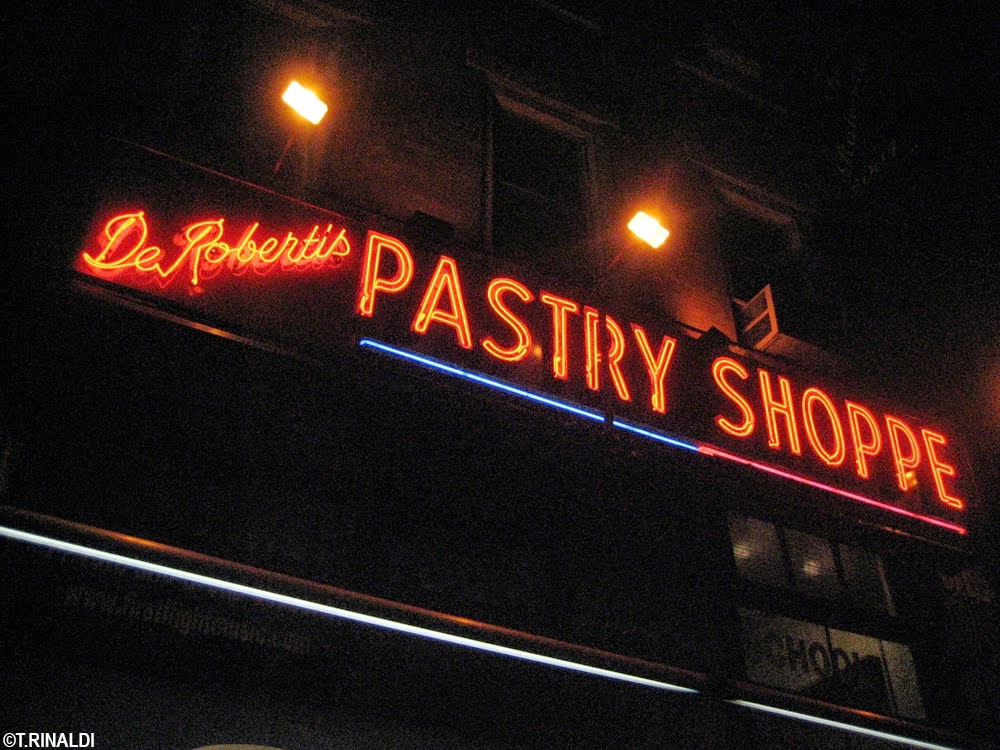 DeRobertis vanished on December 5th, 2014, wrapping up an incredible 110-year run on First Avenue.  The shop's neon window signs quickly disappeared, but the storefront sign seems to have been left behind, though its future seems as dim as the neon tubes within. 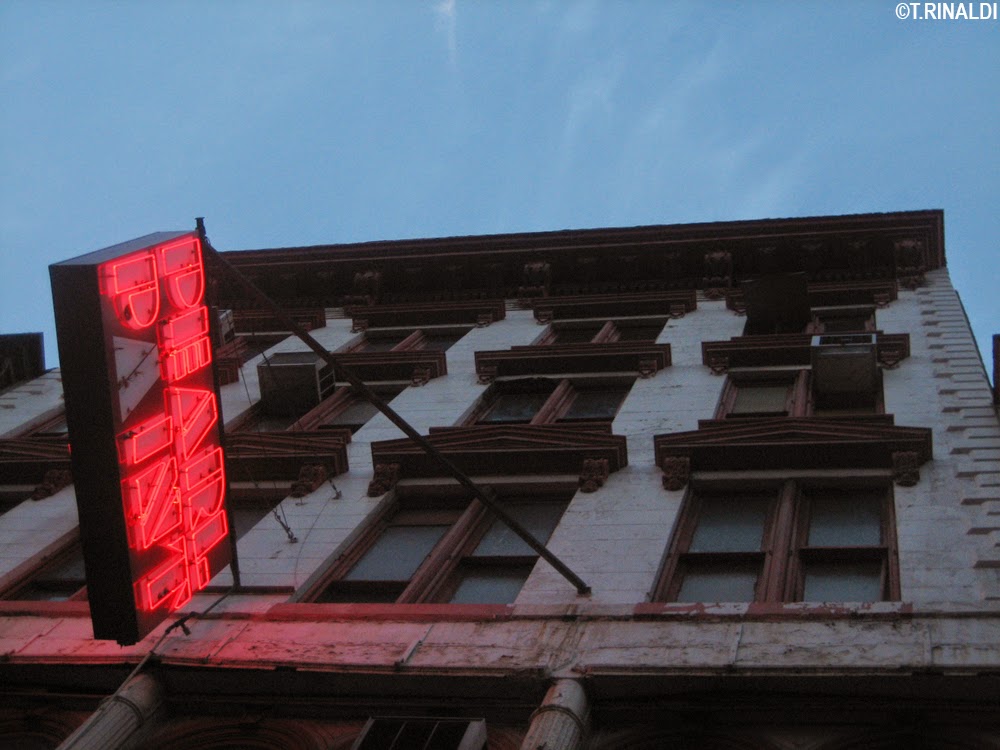 Pearl Paint closed this summer amid rumors of grievous malfeasance on the part of its management and a plot to turn the veteran Canal Street art supply emporium into (surprise) luxury condos.  The orphaned sign remains hanging in ghostly limbo while the building awaits what comes next. 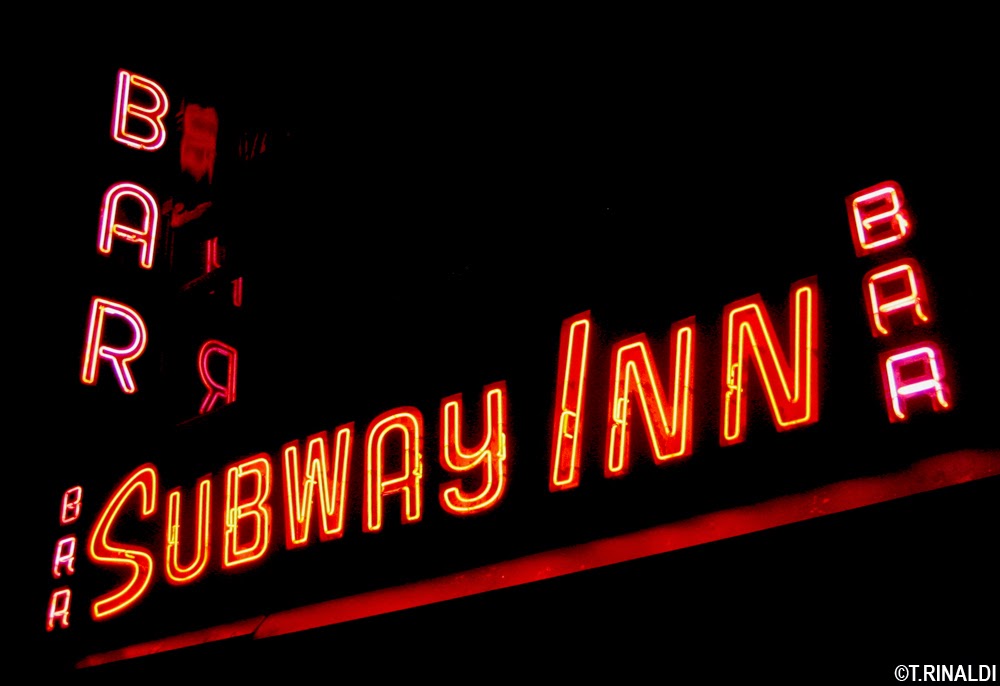 The Subway Inn fought and lost a David-v-Goliath battle against its landlords in the waning months of 2014, closing out a 70-year stint over the subterranean junction of the IRT and BMT subways at 60th and Lex.  Thanks to an outpouring of support from its admirers, the bar managed to secure new digs a few blocks further east, and has pledged that its neon will shine again. 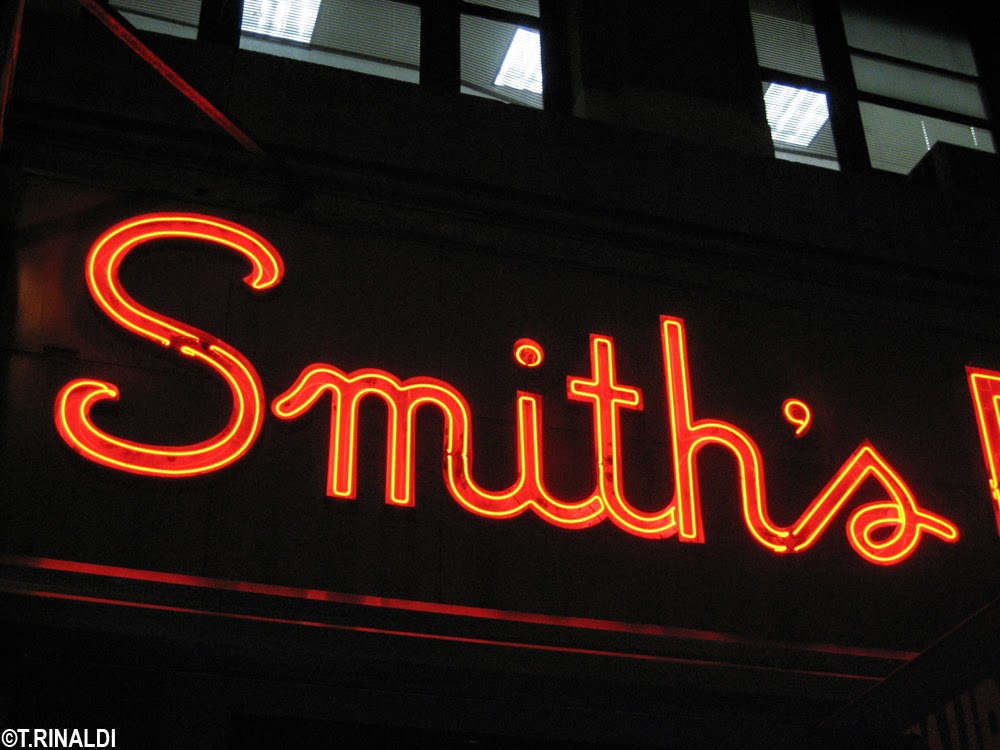 Trying to wrap this up on a positive note, we end on Smith's, which disappeared late this year.  When the bar itself closed suddenly just before Halloween, the sign came down piecemeal - only to re-appear soon thereafter.  Word on Eighth Avenue is that the Smith's will re-open at the same address under new management in the new year.

SEE ALSO:
• From Alexandra Villareal and the New York Observer, "10 New York Institutions We Loved and Lost in 2014."

IN OTHER NEON NEWS:
• From the west coast, Debra Jane is dispatching from a Bay Area holiday neon road trip.
Posted by T.E. Rinaldi at 6:15 AM