A dormant Facebook "Community" page honors one of my favorite vanished signs: that of the Penn Bar & Grill, which formerly presided over the southeasterly corner of Eighth Ave and West 31st Street in Manhattan, just across from Penn Station. 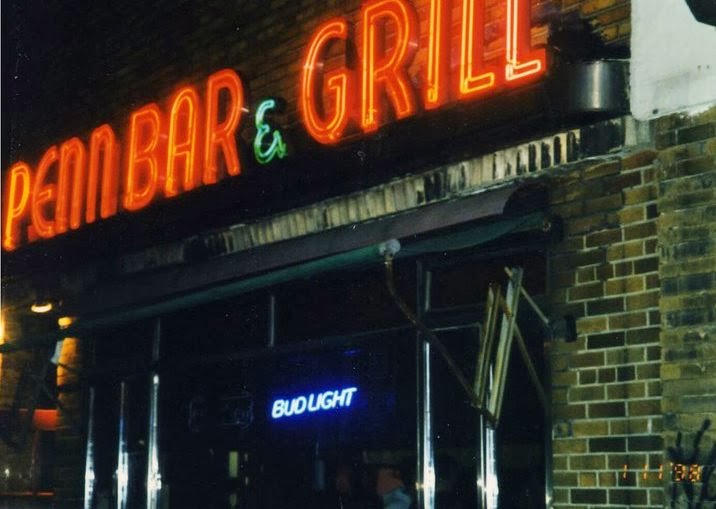 Actually, the Facebook page pays homage not so much to the sign, but to the the bar it advertised, which anchored this corner for about 50 years.  I never managed to pay a visit: it vanished in November 1998, just a few months before I made my first foray to the watering holes of this then still quite seedy block. I was in town from DC, staying with college cohorts at the Hotel Pennsylvania for the NCAA b-ball playoffs.   Finding the Penn Bar closed, we ventured instead to the neighboring Blarney Stone, two doors down, which then still looked like something straight out of Super Fly.  The Blarney Stone survives today, its decor and clientele unrecognizable, but its neon still intact. 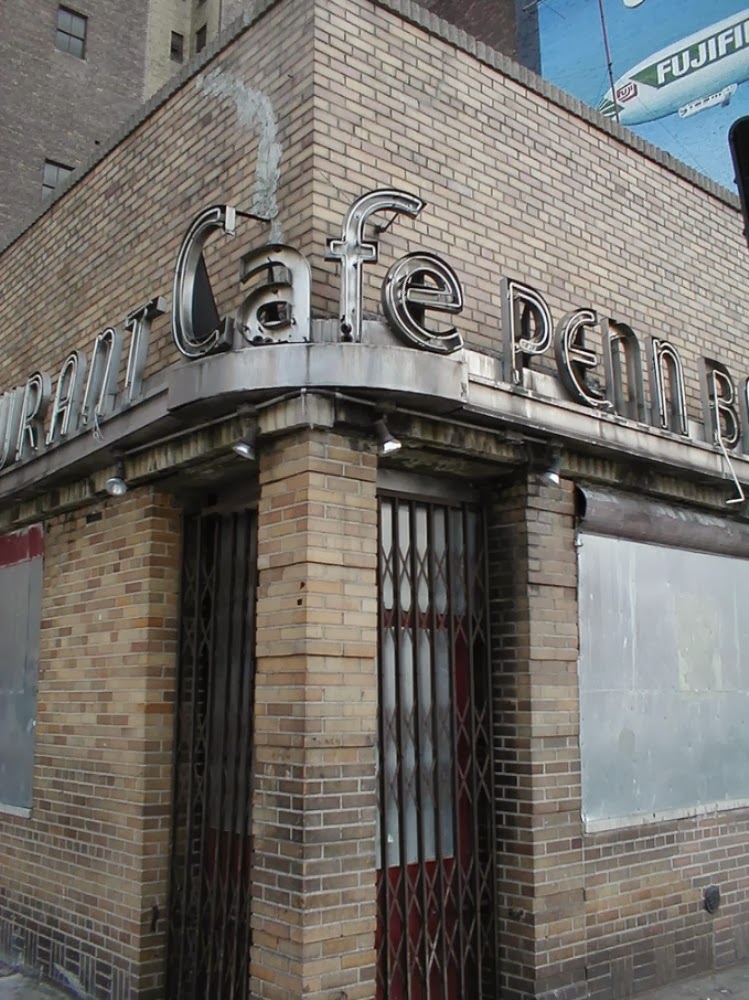 The Penn Bar was one of those places that fascinated me as far back as I can remember.  As a kid in the late 80s, somewhere in the back of my little brain I recall likening its ship's prow "Cafe" lettering to that of another favorite: the dearly departed P&G bar on the upper west side.  Could both signs perhaps have been made by the same sign shop? 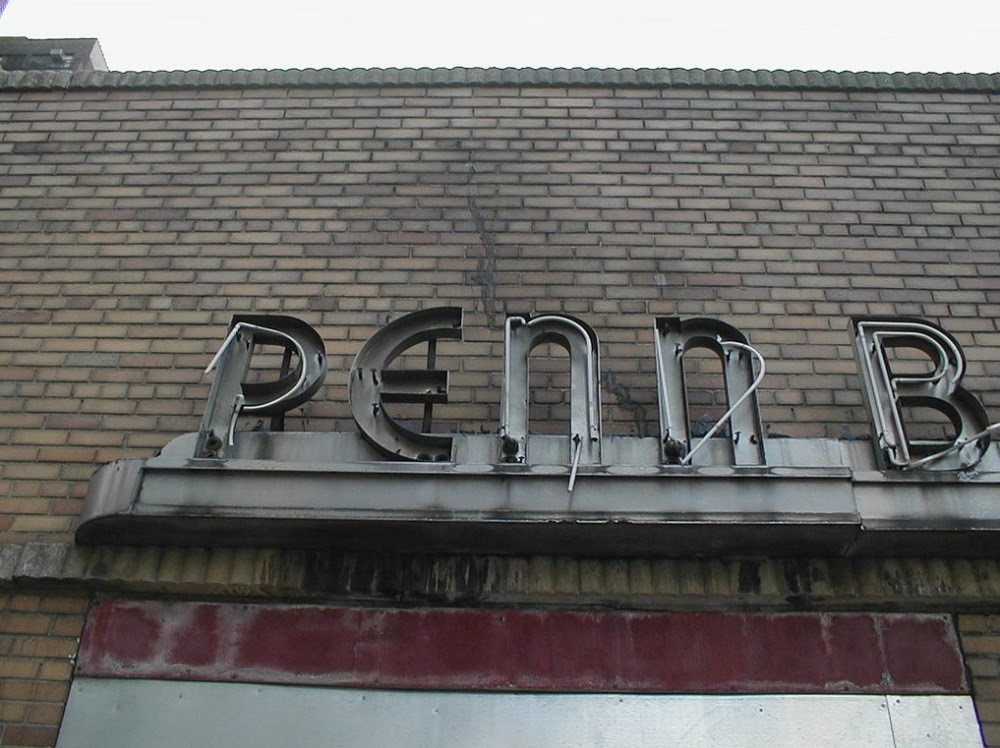 Fortunately, the internet offers us a few Penn Bar mementos.  The signs are recorded in some nice photographs by Aonghais MacInnes, which cropped up a while back in a brief post over at the Lost City blog.  The New York Times commemorated the bar's closing with a mournful write-up back in 1998.  Though the Bloomberg era was still three years away, New York's mega clean-up was already well underway, and the Times write-up was a prelude to innumerable eulogies that came forth in the years that followed.  "Think how you'd feel if you lived in the same house for 46 years," bar owner Larry Bagell told the Times as he fought back a tear:  "If you suddenly had to leave, you'd know that the sound you were hearing was your own heart breaking." 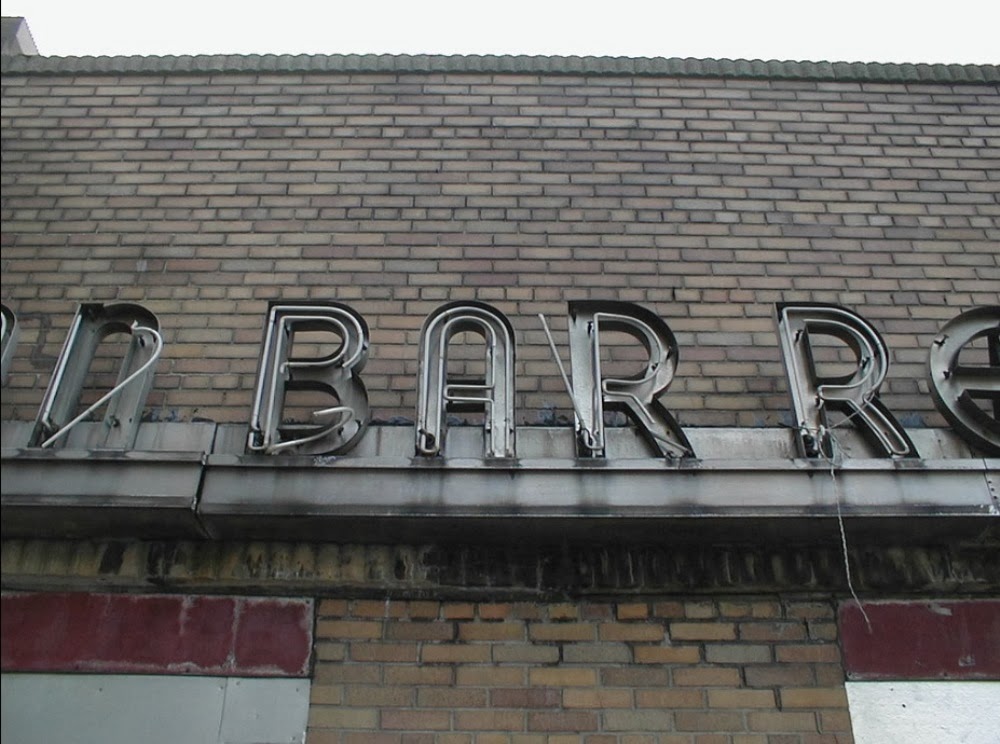 There's still neon on this corner: a Brother Jimmy's BBQ franchise opened up here a few years after the Penn Bar closed.  Maybe one day, Jimmy's will be to a younger generation what the Penn Bar was to me: a portal into a lost city that belonged to those who came before me.  Hard to imagine.  But maybe. 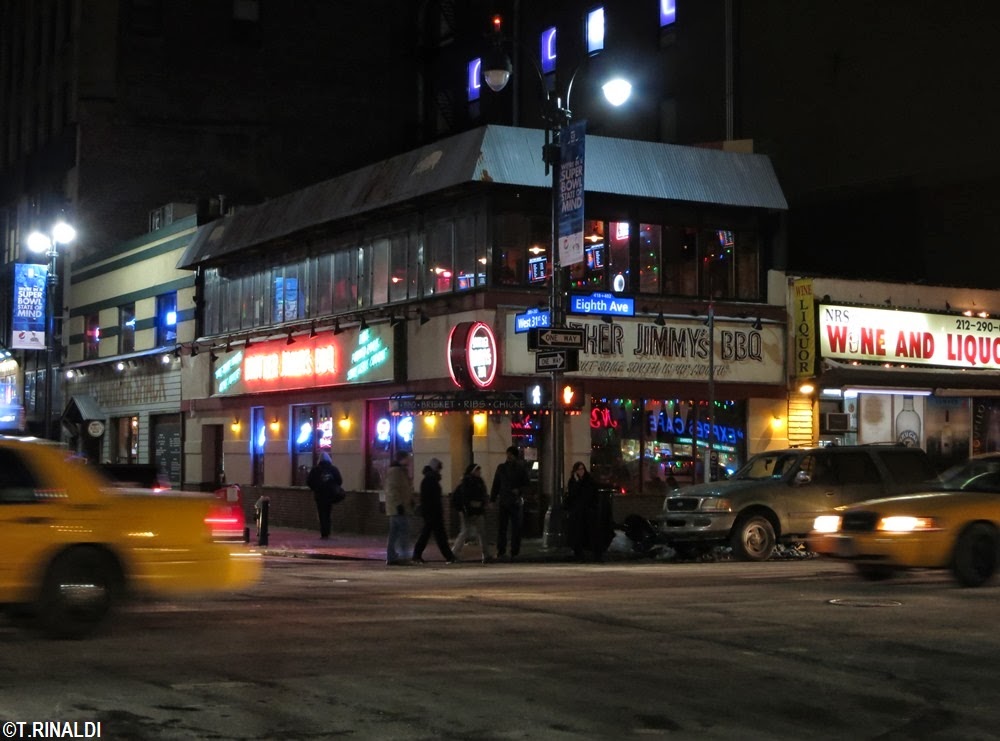 THIS POST was promised back in the early days of this blog, in a tribute to the Penn Bar's neighbor, the long vanished Railway Bar.  See also:

IN OTHER NEON NEWS:
•  From out of the blue: RIP to midtown's Famous Oyster Bar, one of my favorite neon relics in NYC no more.


Owner Larry Bagell Opened 1952-1998 To all of the Penn Bar customers. "I miss you all and remember to stay safe"