This past spring, the temporary disappearance of the spectacular neon signage advertising the Long Island Restaurant nearly incited a mild panic when the signs vanished from their perch at the corner of Henry St. and Atlantic Ave. in Brooklyn.   My heart, too, might have skipped a beat, but fortunately I had the inside scoop thanks to Toby Cecchini, one of the restaurateurs bringing the restaurant back to life, and Jeff Friedman of Let There Be Neon, where the signs were restored over the summer. 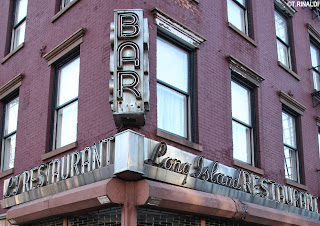 Pre-Restoration: The corner of Henry and Atlantic in the winter of 2010. (T. Rinaldi)

The Long Island was a neighborhood anchor that operated from 1951 until 2007.  (Some background on the place can be found in this NYT story from a 2006.)  Many admired it as a survivor among survivors, replete with all kinds of details steadily vanishing from the urban landscape – especially its great triptych of neon signs.  When the place finally closed, most of us assumed it would all be lost forever. 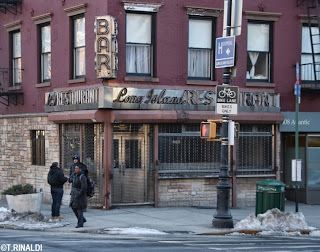 Pre-Restoration: The corner of Henry and Atlantic in the winter of 2010. (T. Rinaldi)

And it probably would have been, too, except that the family that ran the place also owns the building, and made preserving the space with all of its architectural details – and the signs – a stipulation of its lease agreement with any new tenant.  With that, the wheels went into motion.  It took a while, but the place finally re-opened last week under the management of restaurateurs Toby Cecchini and Joel Tompkins. 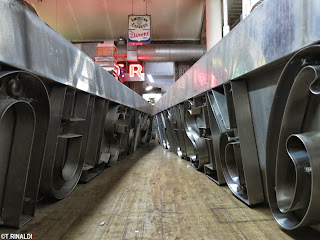 Signs in the shop. (T. Rinaldi)

About the signs: city records tell us they went up in 1953, two years after the restaurant opened.  The sheet metal is all stainless – "a New York staple," says Tod Swormstedt of the American Sign Museum.  The design is simple: a particularly attractive script lettering juxtaposed against basic neon block letters, with the requisite round-topped "A".  My favorite detail: "Long Island" is abbreviated "LI" on the shorter side.  On the color scheme, I had never seen the signs lit; turns out they're cast in classic complementary shades of aqua and fluorescent red.  Unfortunately, there seems to be no record of which shop originally produced the signs. 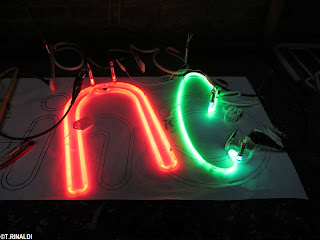 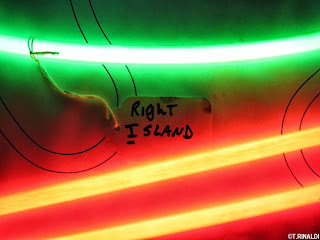 As for the restoration, after some initial sticker shock, the new management contemplated just leaving the signs in place un-lit.  Ultimately they decided to go whole-hog, having the signs taken down and given a ground-up rehab.  Let There Be Neon, who won the restoration contract, trucked the signs across the river to their TriBeCa shop for a thorough reconstruction.  Some great signs have been restored here in recent years, including those of Gringer Appliances, Russ & Daughters, and more recently the Beatrice Inn. 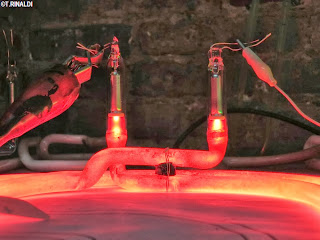 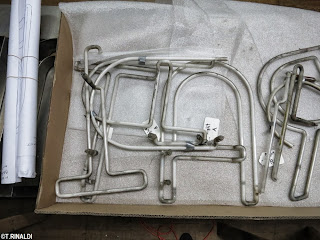 LTBN prescribed a complete rebuilding of the corroded angleiron framework beneath the stainless steel sheathing.  The stainless steel meanwhile had performed well, still in phenomenal shape after 60 years' exposure, so LTBN re-mounted the original stainless skin over a new aluminum framework.   First used as an architectural material at the Chrylser Building in 1931, stainless steel became a popular material for signs soon thereafter; incredibly durable but very expensive, it remained popular among sign makers until the 1960s, when anodized aluminum sheet metal caught on as a less costly alternative.  Stainless steel is almost never used for signs today. 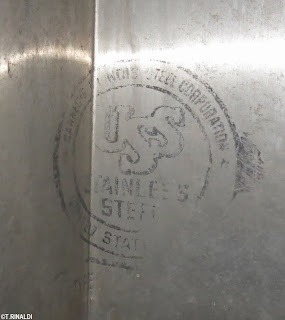 American made: US Steel stamps still mark the concealed inside surface of the stainless cladding. (T. Rinaldi)

The backings within the channel letters were made of less costly, ordinary sheet metal, which was originally painted to match the color of the neon tubing housed within – common practice among sign makers of the period.  These components corroded over the years, leaving just a few traces of the historic green and red paint.  To leave the sign in its "as-found" appearance, LTBN opted not to re-paint the sheet metal backings, but instead to protect them as-is in a clear-coat finish. 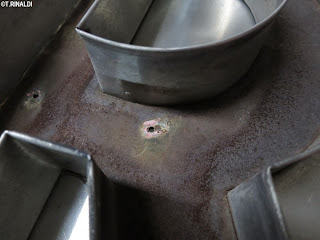 Traces of red paint (center) are preserved under a layer of WHAT.  (T. Rinaldi)

LTBN found most of the neon tubes still intact, but some were beyond salvage.  Color matching replacement neon tubes to the existing ones posed a problem: old tubes fade over time, particularly those lined with phosphorous coatings like these.  The options were: replace all of the tubes outright to achieve a uniform color match, or replace just the broken tubes and retain the intact ones.  In this case, the shop opted to replace as little as possible, keeping the existing tubes and fabricating new segments where necessary, though this required some delicate splicing of old and new glass tubes. 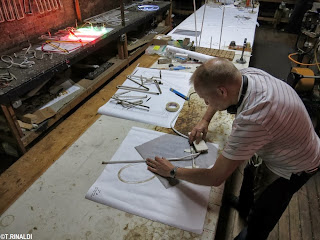 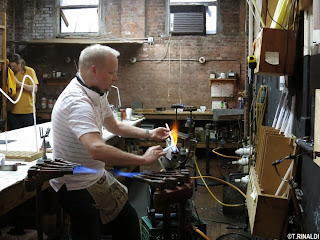 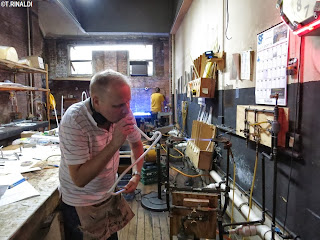 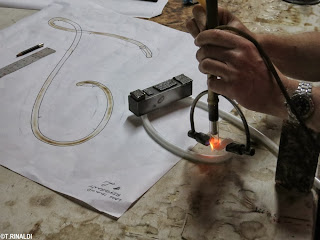 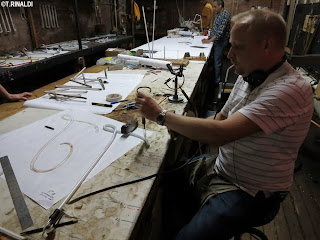 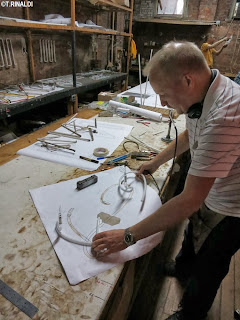 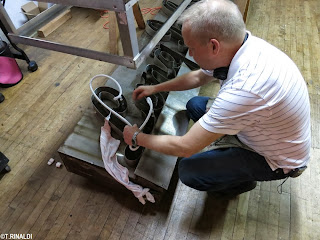 Veteran glass bender Ed Skrypa fabricating a replacement for one of the script "L"s.  (T. Rinaldi)

Look carefully at the sign today and you'll notice that some of the tubes shine more brightly than others: the new tubes, as one might expect, are brighter.  But like a fine patina, this slight imperfection is actually an indication of the authenticity of the sign as a whole, a metaphor for the contrast between new and old in the landscape at large that gives meaning to the very word authenticity. And as the new tubes age, the colors will even out over time. 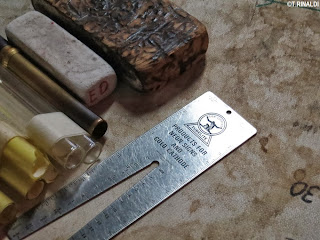 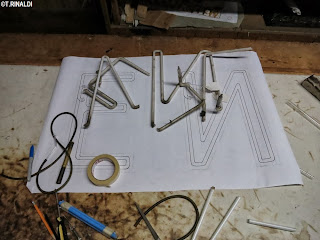 The Long Island Restaurant formally re-opened last Thursday.  The menu is beverages-only for now, but the kitchen will open later this year.  Meanwhile, the sign is up and running, so go out and have a look.  Then stay and raise a glass to a neon restoration brilliantly executed.  But that there were more like this. 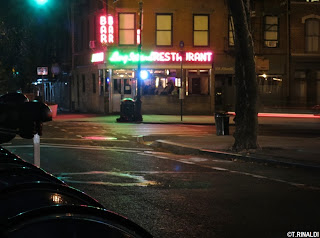 Bright again: an artsy-blurred shot of the corner of Henry and Atlantic.  (T. Rinaldi) 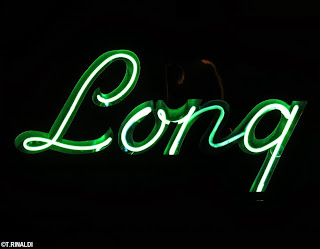 Let There Be Neon salvaged existing tubes and spliced them to new tubes, as evidenced by the differential in brightness the tubes shown above. (T. Rinaldi) 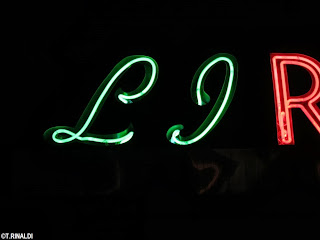 "Long Island" abbreviated to script "LI" on the Henry Street side.  (T. Rinaldi) 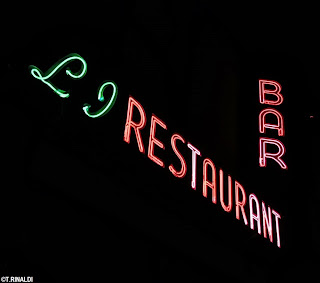 Another view of the Henry Street elevation. (T. Rinaldi)


SEE ALSO:
• Coverage of the LIRestaurant's resurrection in the Daily News...
• ...and in Eater. (Google for more.)
• JVNY's coverage of of the LIRestaurant revival from earlier this year.
• Artistic Neon's restoration of the great Circo's Pasticceria neon in Bushwyck, Brooklyn.

SPECIAL NOTE:
• Back in the saddle:  after a hiatus, the NYNeon blog will resume regular posts for a few more months.