S. Klein and Howard's Men's Clothes disappeared from Manhattan decades ago, taking their big signs with them.  But over in Newark, their neon corollaries survive, though probably not for long.  Downtown Newark is a preserve for the kind of commercial archeology that is all but gone from Manhattan.  Besides the neon relics of S. Klein and Howard's, Newark retains a good share of other vestigial neon, along with some pretty great hand painted and terrazzo signs, too.  This past March, I joined up with my veteran conspirator Rob Yasinsac to pay homage to Newark's downtown neon, and to see what else we could find. 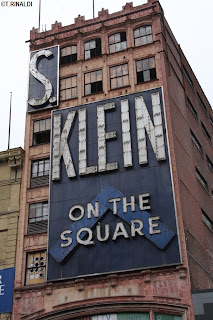 S.Klein "On The Square" / Broad St. between Cedar and West Park (T. Rinaldi)

S. Klein "On The Square" is often remembered as an institution of Union Square in Manhattan.  Turns out, it was also an institution Broad Street in downtown Newark.  The massive neon sign covering six stories of its main facade is a close cousin of one that once advertised the department store's Union Square location.  Both seem to have been installed around 1950.  An older sign on the rear facade appears to be a re-lettered relic from the building's previous occupant, Hearn's.  Sadly, word is that both signs and the historic buildings behind them are due to be razed imminently. 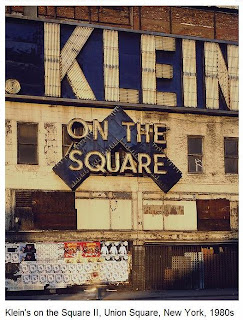 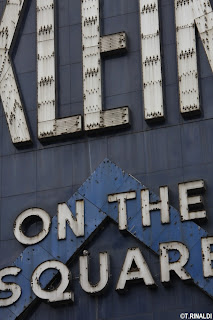 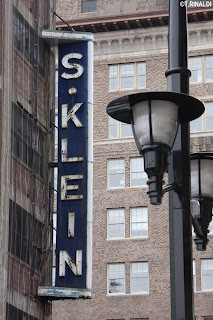 
Just up the street from S. Klein stands the husk of Hahne & Co., one of Newark's flagship department stores.  The signs aren’t neon but still quite an eyeful. 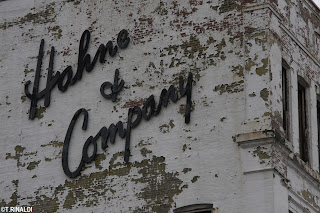 
Also not neon but still of interest: Kislak, on Broad St. and Central Ave., apparently a relic from the Kislak Realty Co. 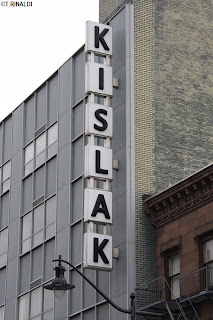 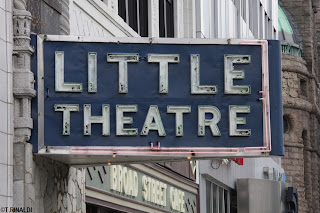 Back near the main crossroads of Broad and Market, the Newark Paramount still has one of the finer neon and incandescent theater marquees anywhere in the tristate, though the theater itself has been shuttered for decades.  The old lobby is now a discount store, but the auditorium behind it is empty. 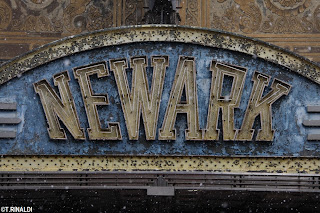 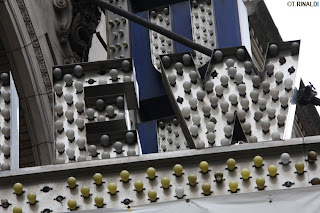 Lording over the intersection of Broad and Market, this remarkable billboard still advertises a long-gone establishment called, appropriately, the Broad & Market Tavern. 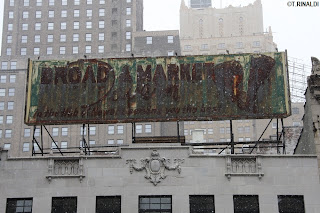 The Broadway & Market Tavern, "In the hub of Newark, serving you the best." (T. Rinaldi) 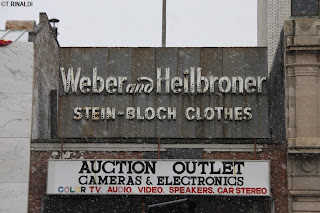 Proceeding back onto Market Street, we find: 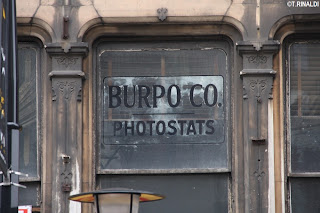 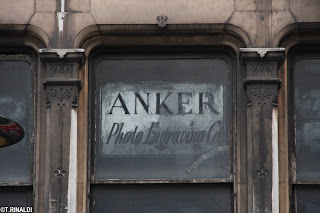 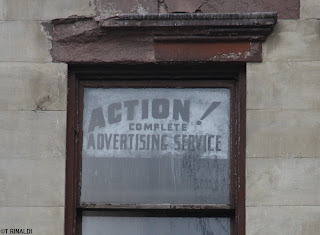 Some very cool old hand-painted window signs, still looking down onto Market Street from vacant offices overhead.  Though most Market Street storefronts are alive and well with bustling if rather honkytonk discount stores, the spaces above seem to be vastly underutilized. 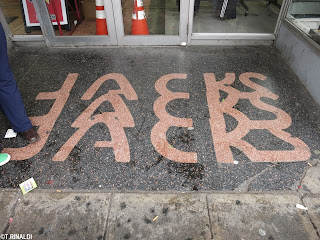 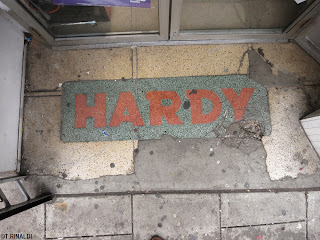 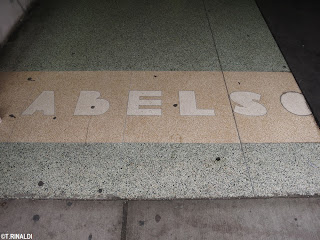 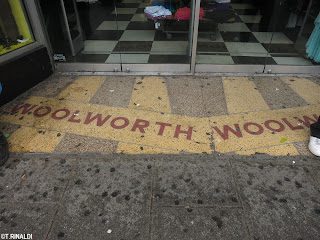 . . . the names of long-vanished Market Street retailers are recalled by a nice collection of handsome old Terrazzo threshold signage.  There's Woolworth's, Jack's, Hardy's, Abelson's, and, is that . . . 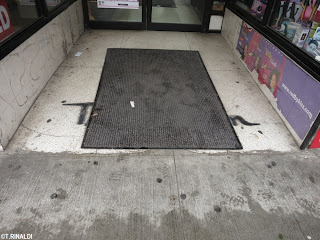 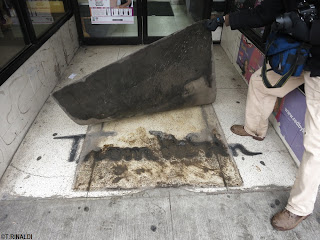 After S. Klein, our next-most exciting find was this four-story high neon remnant of Howard Men's Clothing, at the corner of Market and Halsey. 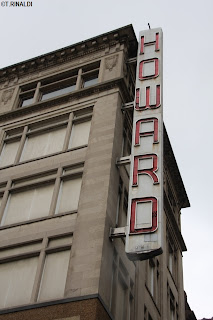 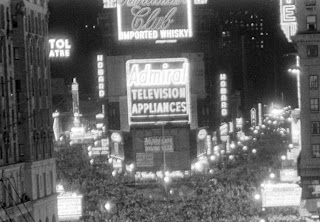 Times Square at New Year's 1956.  Howard signs (in the distance, to both sides of the Admiral TV sign) loomed over the north end of the square for decades.  (Life)

A pair of very similar signs presided over the north end of Times Square for about forty years.   Howard seems to have been pretty well known in its day, with locations on Long Island and in Allentown, PA, in addition to Newark and Times Square.  They're gone now, and quite forgotten, too, at least as far as the internet is concerned.  But there's still the Howard Building, in downtown Brooklyn, presumably the company's former warehouse, now part of the CUNY campus, which still displays the company's distinctive lettering over its main entrance. 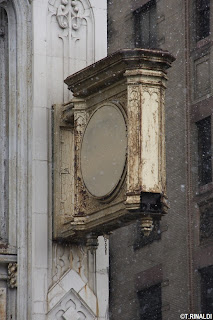 Heading up Market Street, we find this rather forlorn ghost clock hanging from the magnificent façade of the former Bamberger's department store, probably Newark's preeminent commercial institution in its day. 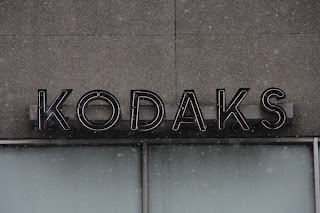 Across Market Street from Bamberger's, four old neon signs advertise such wares as "Kodaks," Sports," "Radios," and "Frigidaire" for a vanished downtown retailer.  Does anyone reading this know what store these belonged to? 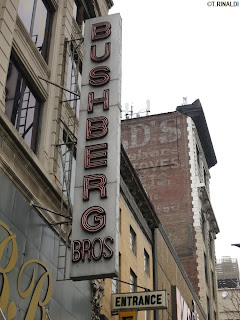 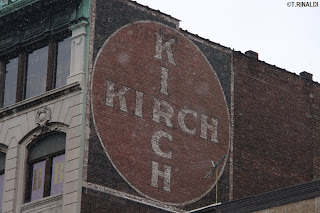 Bushberg Bros., a recently departed furniture store, left this sign in place after it decamped from its Market Street digs a few years back. Older signage up above recalls the building's previous occupant, Kirch's furniture - one of a nice handful of ancient painted signs still to be found up and down Market Street. 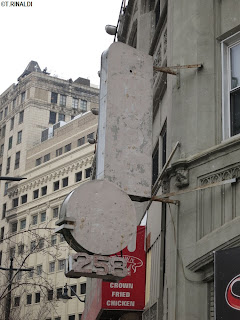 Rounding the corner onto Washington Street, we find this curious neon ghost.  Does anyone out there know what this once advertised?

Further down Washington, this quaint storefront is home to Miller’s Cafe, which would seem to have all the makings of a time-honored, mom-n-pop lunch spot. 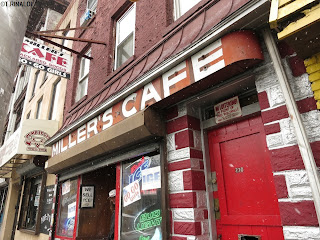 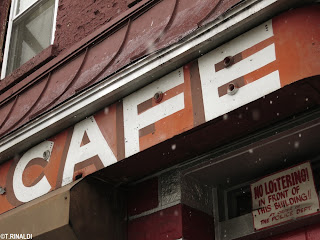 Winding back down Branford Place, the old school mom-n-pop eatery manifests itself, in the form of the venerable Hobby's Deli.  I regret to say we didn't stop in, having already sated ourselves at the Dinosaur Bar-B-Que over on Market Street by the time we found it.  There's always next time . . . 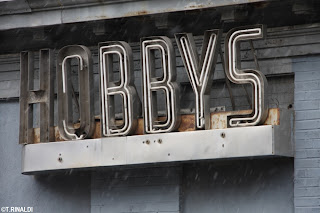