Out of the overwhelming response to last week's name-that-sign-challenge, one winner has emerged:  congratulations to Mike Harrison of Manhattan for getting 8 out of 12. 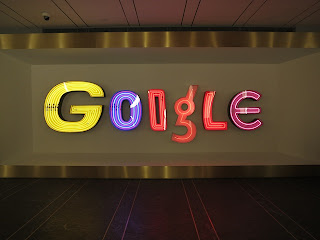 As it happens, Mike was also the only person to submit an entry, so it's especially lucky that he got the answers right. I myself could guess only 7 of the 12 letters.

For those who missed last week's post, the challenge was to identify the original signs referenced in two new neon displays in the east and west lobbies of the Googleplex, housed in the old Port Authority building in Chelsea.  A few of these were driving me absolutely nuts, until Jose Troconis at GrahamHanson decoded them for me.  As suggested last week, some are long gone.  Most, however, are still here to be seen: 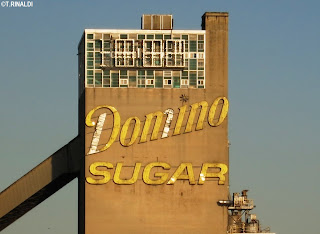 Artkraft Strauss installed the existing Domino sign in 1967-69, replacing an earlier neon roof sign that stood atop the older part of the now-abandoned sugar refinery.  The existing sign is slated for preservation, when and if the proposed Domino condo-conversion ever takes off. 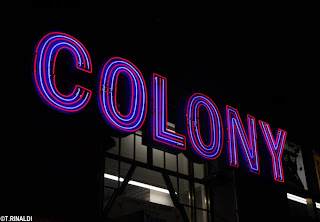 This "O" comes from the third generation of neon signs that advertised the venerable Colony Records.  Installed around 2004, this sign hadn't reached its 10th birthday before the Colony closed its doors in the fall of 2012 after some 60 years in business. 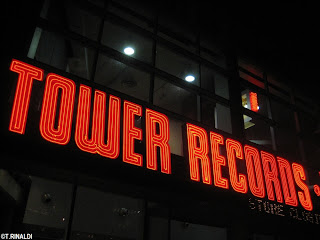 "O" number 2 is a reference to the Tower Records logo, a neon iteration of which formerly wrapped the corner of 1961 Broadway, just across W66th Street from Lincoln Center.  Something felt right about having a record store across the street from the Julliard.  Alas, Tower closed in the fall of 2006.  It's a Raymour and Flanagan now. 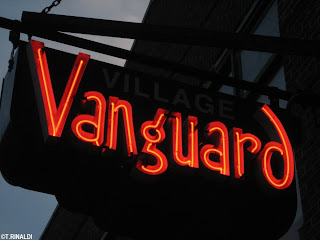 Perhaps my favorite "G" on Earth, the original belongs to a set of equally attractive letters that hang over the Village Vanguard, in Greenwich Village.  The Vanguard's original sign seems to have appeared here sometime in the late 1940s.   The existing sign is a rather good facsimile that faithfully reproduced the lettering of its predecessor. 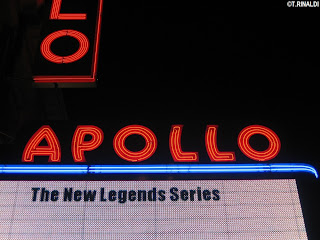 Like the Village Vanguard sign, the Apollo's existing signs are faithful reproductions, whose installation was overseen by the city's Landmarks Commission.  The previous sign and marquee appeared in 1940, replacing highly eccentric incandescent bulb signs. 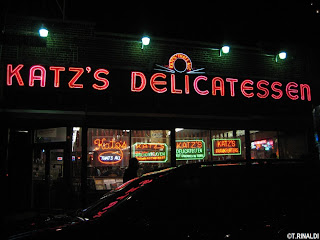 One of New York's most distinctive "E"s, this geometric beauty comes almost full circle.  Happily, the original sign survives in situ and hopefully will for a long time to come.   Buildings Department records give an installation date of 1935.  Katz's itself is celebrating 125 years in business in 2013. 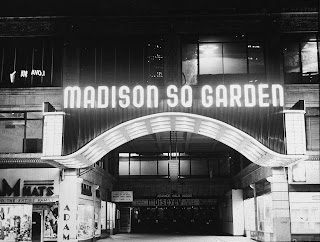 A once prominent sign now lost to the depths of obscurity.   This "G" comes from the third Garden's second marquee – that is, the neon marquee installed sometime around 1940 over the main entrance of the 1925 iteration of Madison Square Garden.   Preceded and succeeded by incandescent and fluorescent marquees, respectively, this appears to have been the Garden's one neon incarnation. (Photo via WiredNewYork) 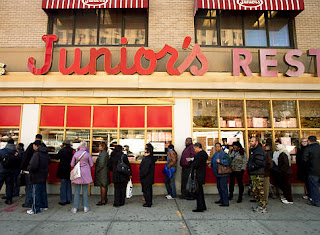 Looks to me more like something borrowed from Coca Cola or Coors, but this "O" is meant to reference that of Junior's, the Flatbush flagship of downtown Brooklyn. (Photo via NYCwithJeff) 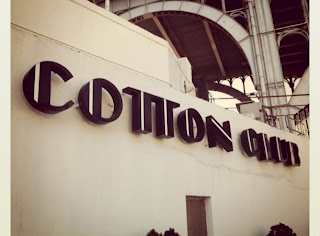 The Cotton Club is/was sufficiently famed to earn its own Wikipedia page.  This "O" is borrowed from signs that advertised a latter-day, tourist-trapish incarnation that cropped up in way-western Harlem sometime around 1980.  The earlier Cotton Clubs had fairly robust neon displays of their own, but with less self-consciously "deco" lettering. (Photo via flickr.com/DiegoF)

Judging by some rather heartfelt online eulogizing, La Groceria seems to have been quite the hip, happenin' place in its day, which lasted from the early 1960s through the mid-'80s.  The West 4th Street Papaya Dog occupies the space now, a hip-happenin little place in its own right.  The JVNY blog tells us that changes are now afoot for Papaya and its neighbors.  (Photo via NYU) 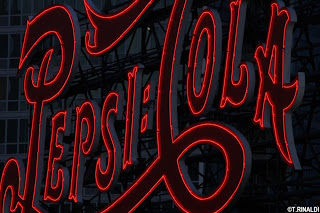 Surely a contender for New York's best-liked sign.  Pepsi has marked the Long Island City waterfront since 1937.  The original sign has actually outlived the building atop which it once stood, a now-demolished Pepsi bottling plant that made way for a battery of highrise condo towers in 2005.   Another tribute can now be found way over across the borough at Citi Field. 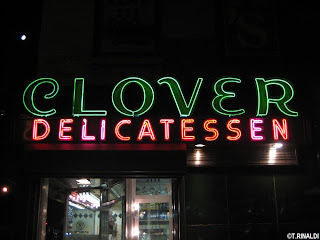 A truly phenomenal sign installed by the truly phenomenal Clover Deli in 1956.  The business itself is older, having opened over on Second Ave shortly after WWII.  The Clover is still alive and well today, under the management of the same family for nearly 70 years.

MANY THANKS to Jose Troconis at Graham Hanson design for decoding the Google Signs.

• June 19, 2013, for the Lower East Side Preservation Initiative at the Neighborhood Preservation Center.
• July 22, 2013, at the NYPL / Mid-Manhattan Branch.