Lights Out 2012: Signs We Lost This Year

Sad to say, 2012 has been a rough year for New York's old neon signs.  Below is the list of the year's casualties (including a few that vanished in late 2011).  As is usually the case, most of the signs below disappeared along with old, independent businesses, places that had been neighborhood institutions for generations.  A few were lost thanks to Hurricane Sandy.  Put together with last year's losses, this brings us to a total of about 25 great old signs lost from New York in just the past two years.  And the prospectus for 2013 isn't much better (see below). 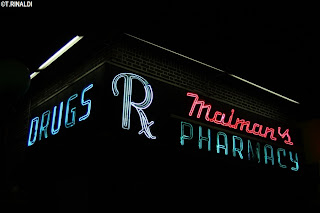 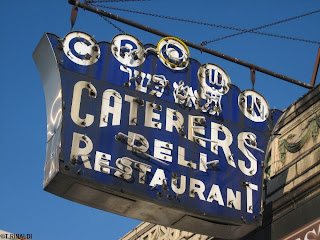 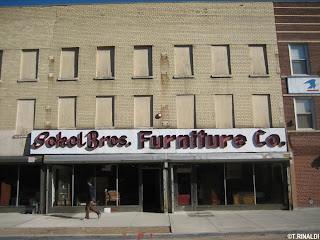 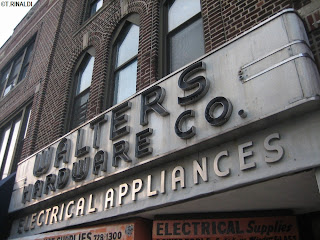 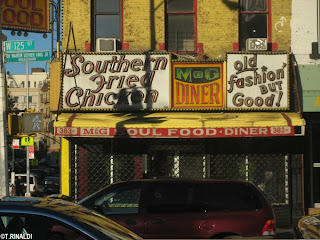 M&G Southern Fried Chicken, 383 W125th St., Manhattan
Globe Neon Sign Corp., Installed c. 1966
M&G closed back in 2008 (shortly after making a cameo in the film Precious) but the sign hung around until about a year ago.  Gone now. 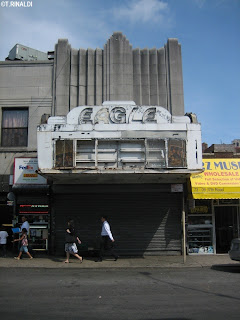 Eagle (ex-Earle) Theatre, 73-07 37th Road, Queens
Installed c. 1939
Originally the Earle, the marquee was re-lettered when this neighborhood theater re-branded itself the Eagle after a stint showing adults-only fare.  Later became a Bollywood house before finally closing around 2009.  Marquee removed as theater prepped for reported conversion to a "South Asian market and food court." 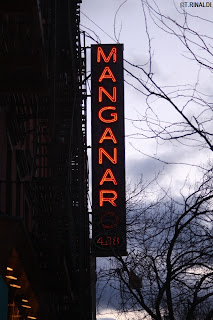 Manganaro Foods & Restaurant, 488 9th Ave., Manhattan
Installed c. 1955
Legendary Hell's Kitchen Grosseria Manganaro shuttered in 2012 after 120 years of operation.  The space is now home to Tavola, one of New York's new high-end pizzerie, which has installed a new sign in the style of Manganaro's old one. 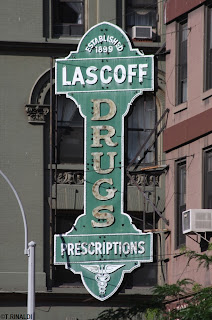 J. Leon Lascoff & Sons, 1209 Lexington Ave., Manhattan
Installed 1931
Lascoff's closed in the summer of 2012 after 113 years in business.  The sign had anchored this corner since 1931, making it one of the very oldest surviving neon signs in all of NYC.  Amid pleas for its preservation, the sign turned up for sale on Craigslist.  Re-listed after no-one ponied-up the $12k asking price, the sign finally vanished without a trace. 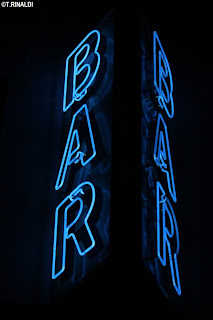 Colony Records, 1619 Broadway, Manhattan
Installed 2003-04
A new sign for an old business.  Colony was around long enough to have three great neon signs, of which this sadly has proved to be the last. 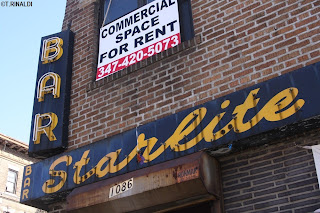 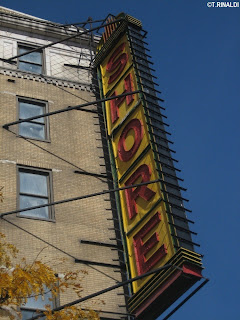 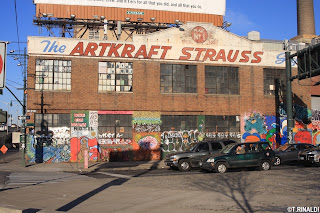 Installed c. 1960; future uncertain with the impending closure of this Harlem landmark business. 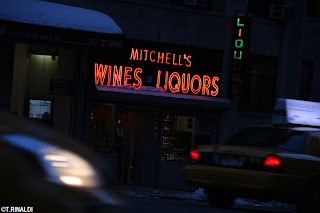 Mitchell's Wine & Liquor Store, 200 West 86th Street, Manhattan
Installed 1946 and 1949, vertical sign by Midtown Neon Sign Co.
Project Neon brought us the troubling news that this sign might be poised to needlessly vanish in the coming months due to a slated storefront renovation.  Sympathetic readers are encouraged to call, write, or stop by to entice the ownership to reconsider. 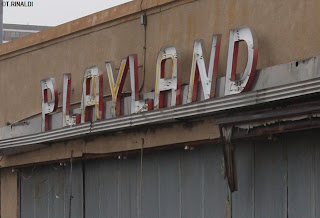 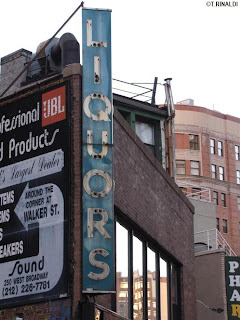 Brite Buy Liquors, 11 Ave. of the Americas, Manhattan
Higger Electric Sign Co., c. 1959
Brite Buy has closed-up shop; what will happen to the sign remains to be seen. 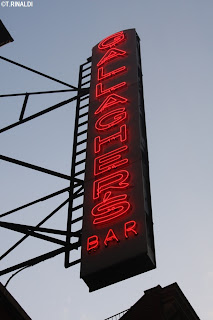 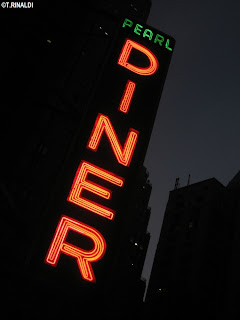 Pearl Street Diner, 212 Pearl Street, Manhattan
Installed 1958
The Pearl Street Diner is one of the unfortunate legion of restaurants laid-low by Hurricane Sandy, still closed more than two months later.  Here's hoping they can get back on their feet sooner than later.