In 1986, then-New York Times architecture critic Paul Goldberger decried a new roof sign advertising Hitachi electronics at Columbus Circle as "one of the sharpest visual intrusions the midtown skyline has seen in years."  The location is held down today by the CNN sign.  "It is not all that bad looking in itself, and it might look fine on Times Square," Goldberger wrote then. "But it could not be more wrong for this rooftop perch, where it brings a garish commercialism directly into Central Park." 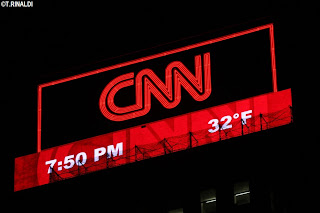 Historically, however, Columbus Circle may have been second only to Times Square in the number of big off-premise roof signs gathered there.  Old photographs by Walker Evans and Berenice Abbott show some of New York's most extravagant spectaculars presiding over the Circle in decades past. 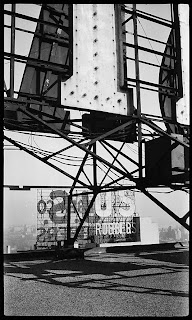 Today the CNN sign (successor to the Hitachi spectacular) is the last living vestige of the days when the rooftops over this corner of Central Park glittered with an array of "garish commercialism." Though Times Square has always been known for its signs, the world's first large illuminated commercial sign in fact debuted at Madison Square, in 1891. Over the next few decades, rooftop spectaculars sprouted at most of the big intersections formed by Broadway's diagonal axis, from Union Square at 14th Street right up to Columbus Circle at 59th and Lincoln Square at 66th. 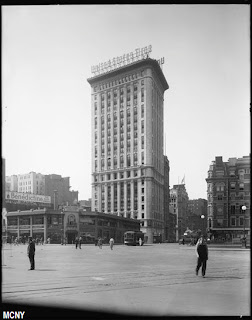 Many of the signs over Columbus Circle peddled the wares of "Automobile Row," the stretch of Broadway in the West 50s and 60s where the auto industry established a strong presence in the early 1900s.  B.F. Goodrich installed large illuminated roof signs over its headquarters building around 1910.  Signs for U.S. Rubber and Fisk Tires followed.  By the 1930s, there were Columbus Circle spectaculars advertising Coca Cola and Schenley's Whiskey, as well as big roof signs for the the Manufacturers Trust, Mayflower Hotel and Kent Garage. 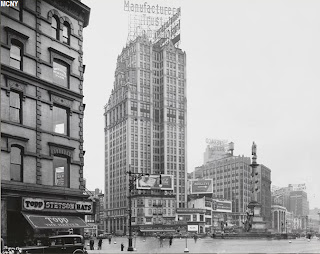 Looking northwest across the Circle c. 1930.  The Manufacturers Trust sign presided over Columbus Circle from a site now occupied by the Time Warner Center. (MCNY)

Zoning ordinances enacted in the 1960s blocked the installation of signs like these throughout the city (except at Times Square). The CNN sign survives thanks to a loophole allowing the installation of new signs where older signs have existed continuously since the restrictive zoning code went into effect. Roof signs outside Times Square therefore are typically successors to a long line of interesting predecessors. 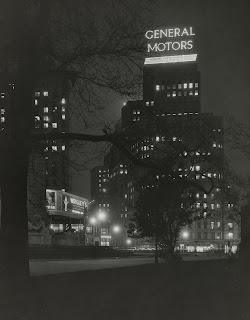 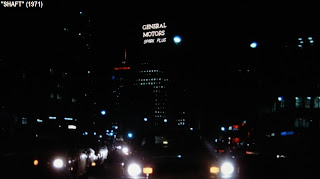 The CNN sign owes its existence to the General Motors sign, installed around 1928 on the roof of the newly completed GM headquarters at 1775 Broadway.  The GM sign survived for an incredibly long time - apparently right up until the lamented Hitachi sign took its place in the mid-1980s, by which time the automaker had moved already moved out of the building below. Hitachi survived just a few years: it lost the spot to the A&E Biography sign around 1990, which in turn yielded to CNN in 2005. 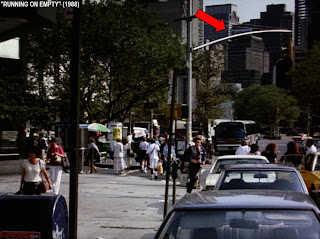 I could find only this one likeness of Paul Goldberger's detested Hitachi sign, in the 1988 film "Running on Empty." 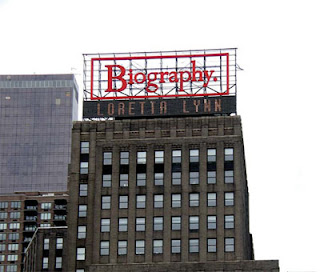 The old GM building itself was sadly horrifically bastardized a few years ago, its art deco facades by Empire State Building architects Shreve, Lamb and Harmon masked beneath a new glassy skin.  Though it shares no frontage on the Circle proper, the building has been re-branded "3 Columbus Circle."  But the CNN sign survives, shining out as its predecessors have for more than 80 years.  Its value as one of the very few grandfathered roof signs on the Manhattan skyline will likely ensure a quick transformation when the time comes for a new sign to take its place. 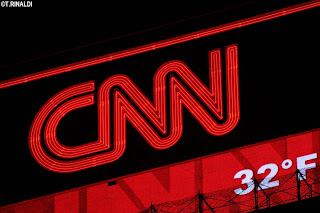 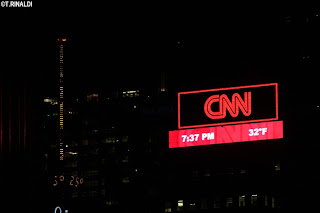 SEE ALSO:
• Paul Goldberger's Hitachi Lament, as published in the Times back in '86 (scroll down).
• David Dunlap's coverage of the GM building's horrific bastardization in the New York Times.

IN OTHER NEON NEWS:
• Colony Records has expired, "gone for good" as of this past weekend.
Posted by T.E. Rinaldi at 5:21 AM