A brief tribute this week to a sign I never saw:  the Terminal Bar, across Ninth Avenue from the Port Authority Bus Terminal, was not the kind of place my parents brought me on our visits to New York when I was a kid.  And lo, by the time I was old enough to venture into such establishments on my own, it was but a memory.  One can get a sense for the good old days, though, in this really spectacular short film, part of a longer work by Stefan Nadelman, that I came across thanks to the great then-and-now study of the film "Taxi Driver" over at ScoutingNY (the Terminal Bar makes a brief cameo in Scorsese's 1976 film).  Mr. Nedelman's film uses photographs and reminiscences from his father Sheldon, who tended bar here for ten years. 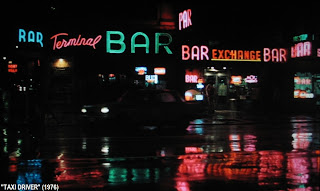 The Terminal Bar and its neighbors, c. 1976, as depicted in "Taxi Driver". Having just about killed myself trying to get decent rainy night photos for the neon book, I have concluded that Scorsese must have opened some fire hydrants to pull this off.  ("Taxi Driver")
Together with its neighbors, the Exchange Bar and the Bus Stop Bar – both very congenial places, I'm sure – the Terminal Bar made a stirring sight in its day.  Imagine coming out of Port Authority to find THIS - New York's neon receiving line, there to greet you. 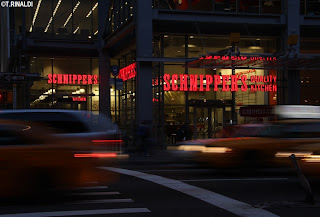 Schnipper's Quality Kitchen, at Eighth Avenue and 41st Street - the site of the Terminal Bar today.  (T. Rinaldi)
The Terminal Bar and its neighbors are ancient history today, of course – Renzo Piano's gleaming New York Times building stands in their place.  Yet, almost improbably, some pretty good new neon has sprouted here on lower reaches of the new building.  Are these hearty seedlings of the signs that existed here before?  Or did someone just feel that this corner wouldn't look right without a good sign?  In a way, perhaps, a bit of both.

(The New York Times building has some other great signs at street level – does anyone know who made them?) 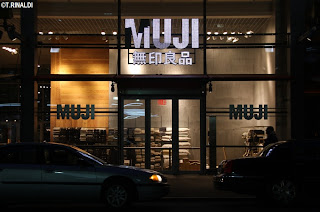 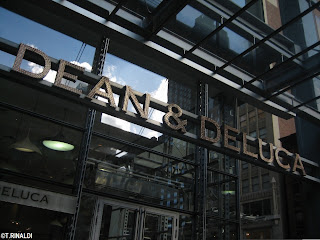 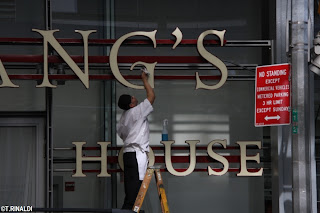 Above: New signs on the lower reaches of the new New York Times building. (T. Rinaldi)

IN OTHER NEON NEWS:
• The neon book has gone out to the printer!
• Did anyone watch Jeopardy last night (May 7, 2012)? The correct response to final Jeopardy was "What is NEON?" and yes, I am pleased to say I got it right.
Posted by T.E. Rinaldi at 4:08 PM