Allen and The White Horse

One of the most recognizable signs in New York is the work of a particularly obscure sign company.  The modest neon sign of the White Horse Tavern on Hudson Street seems to be the lone surviving installation of the Allen Sign Company of Manhattan. 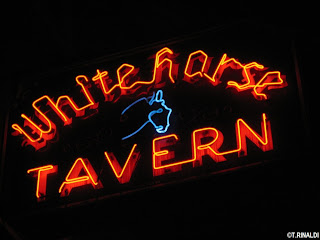 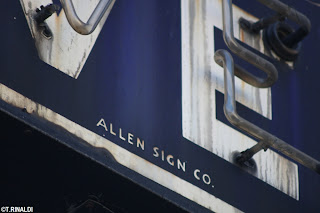 I know of no other surviving works by Allen, and have come across no other details on the firm - almost.  By some good fortune, I ran across a passing reference to the company in the December 1946 issue of Signs of the Times magazine, which names the firm's proprietors as Al (Allen?) and Sidney Rosenbloom, "both formerly with Claude Neon Lights in New York."  Claude, of course, was the veritable mothership of neon shops, having launched the commercial neon trade first in Paris before World War I and then in New York in 1924.  The blurb mentions another of Allen's works, a long-vanished vertical sign for the Manhattan Towers Hotel on the Upper West Side, which at 67 feet high was said to be the "tallest sign north of Times Square." 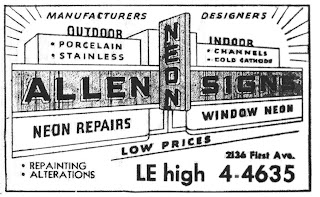 With the owner's names in hand, I then consulted the 1930 U.S. Census to see what I could turn up on the Rosenblooms.  Al Rosenbloom proves elusive: of several persons by that name, none can be clearly identified as the future proprietor of the Allen Sign Co.  Sidney, however, turns up living in Laurelton, Queens, age 34, his occupation listed as "Salesman – Sign" some fifteen years before the Signs of the Times blurb.  The Allen Sign Company appears in the Manhattan yellow pages from about 1945 through the mid-1970s, then vanishes. 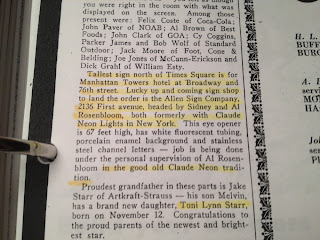 Today, the last surviving work of the Allen Sign Company may be this solitary sign that has hung over the door of the famed White Horse Tavern since 1946.  According to Jef Klein's History and Stories of the Best Bars of New York, the tavern itself began life in 1880 - it had already been around 64 years when its owners decided to go neon.  In the 1950s, the White Horse became known as a haunt for some of Greenwich Village's better known bohemians, lending the place the legendary status it enjoys to this day. 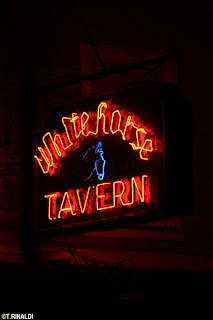 The bohemians are mostly gone now, but the sign that beckoned them remains.  Its blackletter script and little white horse head reference the ye-old-pub signs of Great Britain.  For the color scheme, the Rosenblooms went for porcelain enamel sign faces with white lettering and border trim over a solid blue background, a standard palette more commonly used for wayfinding signs of the porcelain enamel era than for neon storefront displays.  The lettering glows in simple red neon, with fluorescent white for the horse (of course). 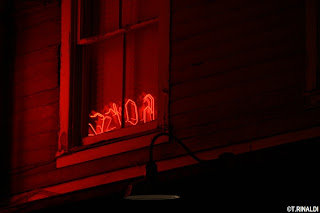 As fine a work as it indubitably is, the White Horse sign likely owes its prominence to the notoriety of the tavern beneath it as much as to its own charm.  Even so, if the winds of attrition have carried off all but this one example of the Rosenbloom's handiwork, the Allen Sign Company can still lay claim to one of New York's finest old signs.  The Rosenbloom boys did good. 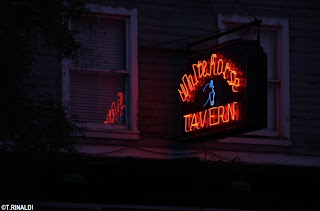 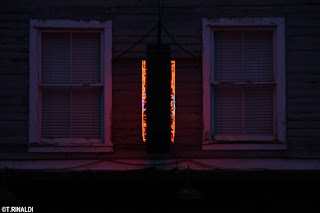 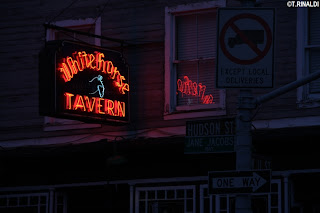 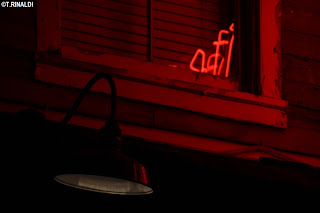 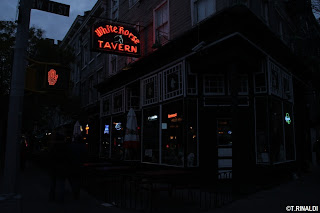 Outtakes from evening photoshoots at the White Horse on November 19 and December 21, 2010.  (T. Rinaldi)

Please drop me a line if you know anything more about the Allen Sign Company.

IN OTHER NEON NEWS:
• An exciting update on the Beatrice Inn sign restoration, at JVNY.