You will pardon, I hope, the brevity of my posts this month.  It's the holiday season.  I'm busy, you're busy, so I will keep my remarks to the point.  Not to mention – it’s time to make final edits to the neon book!  I promise a more holiday-themed post next Christmas.

Being pressed for time, I stopped by the McDonald's near Penn Station the other day for some "fast" food.  Not really, but I couldn’t think of a decent segue.  Those familiar with this establishment may have noticed a change here lately: the restaurant reopened last month after a complete gut-renovation.   The work has brought this franchise up to date with the parent company's Apple store-inspired "new look."  "No more clown-red roofs," says USA Today of the nationwide overhaul masterminded by design consultants Lippincott. "If the new look proves to be a hit, it could redefine America's biggest restaurant chain and nudge competitors at all ends of the spectrum to find some way to respond." 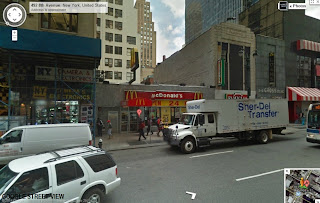 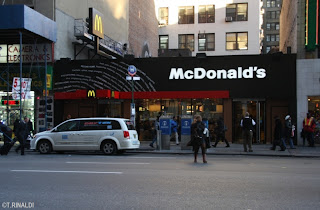 What does this have to do with New York Neon?  Two things. First, it makes the point that neon signs are part of a continuum of commercial design that continues to evolve, embodied by different materials and technologies as time passes.  Second, it gives us an opportunity to admire the signs that held court here when 490 Eighth Avenue belonged to the Travler's Bar and Restaurant.  The signs vanished long before my time, but happily not before being immortalized in a splendid Wurts Bros. photograph preserved at the New York Public Library.  A quick internet search yields nothing on this business.  From the photo, we can tell that Travler's offered cocktails and seafood for voyagers passing in and out of Pennsylvania Station, a block away, and the bygone Greyhound Bus Terminal, then located just around the corner. 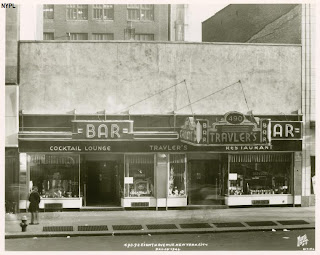 The Travler's Bar & Restaurant, December 10, 1946. The signs were installed in 1936 for the previous occupant, the Red Seal Restaurant, and later re-lettered for the Travler's.  DOB records suggest they survived until 1955.  McDonald's opened here by 1980. (NYPL / Wurts Bros.)

I have long noted with a certain pleasure how businesses in this part of town tended to name themselves for their proximity to Penn Station.  As the city declined in the 1960s and 70s and the old Penn Station yielded to that "monumental act of vandalism," these old places, with their names almost invariably articulated in aging neon signs, lent the area a uniquely gritty ambience.  The Penn Bar & Grill, the Railway Bar, the Penn Terminal Hotel, the Pennsylvania Liquor Shop, the Penn-Post Hotel, the possibly-doomed Hotel Pennsylvania . . . the Travler's Bar. 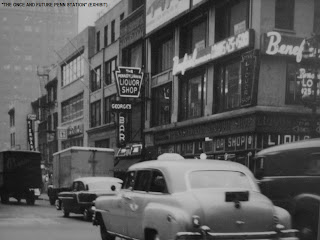 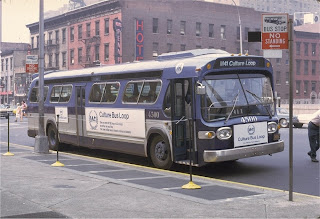 They're all gone now, save for the Hotel Pennsylvania, a McKim Mead & White landmark that may or may not be poised for the wrecking ball.  Things to reflect on over a cappuccino and Fruit-n-Yogurt Parfait at 490 Eighth Avenue. 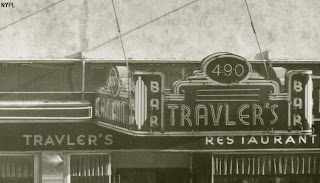