Scattered around New York, a handful of old neon signs bear the maker’s mark of the Salzman Sign Co.   There is no way to know how many signs Salzman produced over the years – possibly thousands.  Today the company is gone, but not without a trace.  My research has turned up very little on Salzman, but from the work it left behind, it is clear that this was one of New York’s most important neon sign makers for much of the 20th century. 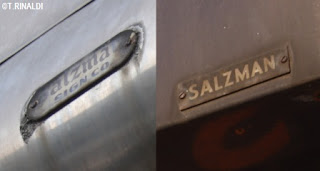 Nathan Salzman came to the United States from Russia just before the First World War, around the time of his 20th birthday.  He identified himself as a “sign writer” in the 1920 census.  By 1930 he had established his own shop.  He partnered briefly with Sam Langsner to form the La Salle Sign Corp. in the mid-1930s, but set off on his own again, opening the Salzman Sign Co. a few years later.  In 1940, Salzman advertised “over 25 years” in the sign business.  The company set up shop at 1001 Bedford Avenue in Brooklyn.  It remained listed in the yellow pages through the late 1970s. 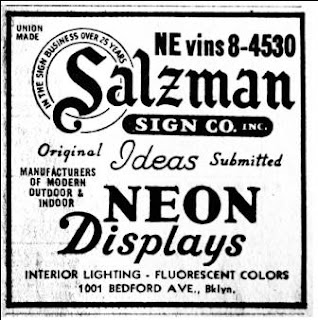 Salzman advertised as having been "in the sign business over 25 years" in this display ad placed in the Manhattan telephone directory in 1940.  (N-YHS)

Examples of the company’s work can be found in Manhattan, Brooklyn and Queens today.  The signs are made from durable materials – porcelain enamel and stainless steel, the sign industry’s sheet metals of choice before anodized aluminum became widely available in the 1960s.  The designer(s) of these signs demonstrated a talent for juxtaposing handsome letter styles.  Some of the signs have been dark for years.  But most will come aglow tonight, doing the work for which they were intended 50 or 60 years ago.
The oldest of Salzman’s surviving neon signs is likely that of Roebling Liquors, on Roebling St. in Williamsburg, Brooklyn.  Records at New York’s Department of Buildings (DOB) indicate an installation date of 1945.  The sign sports inventive stainless steel details.  The store and its sign narrowly avoided being wiped off the map for the construction of the neighboring Williams Plaza houses in the early 1960s. 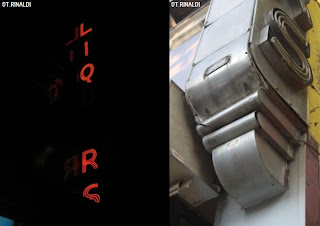 Vertical “prism” signs were very popular in New York in the 1950s and 60s, and at least three Salzman-made examples of these signs survive today.  One on Fulton Street in Bedford Stuyvesant, Brooklyn recalls a long-defunct business called Lincoln Credit (installed c.1950).   Over in Gravesend, another Salzman vertical sign (c. 1959) marks the spot of the Coney Island Bialy Bakery, still going strong at 2359 Coney Island Ave.  In Manhattan, a similar sign (c. 1953) hangs over the storefront of the Alleva Dairy on Mulberry Street in Little Italy.

Three vertical signs by Salzman, in Brooklyn and Manhattan.  (T.Rinaldi)
Surviving fascia signs (parallel to the facade) by Salzman are more expressive.  On Bedford Avenue in Williamsburg, Brooklyn, a ghost sign (c. 1950) advertises Auto-Lite “Sta-Ful” batteries.   On Manhattan Avenue in Greenpoint, another Salzman sign (c. 1952) heralds J. Josephs Sons Co., dealers in home furnishings and appliances.  This storefront is still very much alive and well.  The sign has lost its neon tubes, but its distinctive black and orange porcelain enamel face still looks almost as good as the day it was installed.  To the north, the fascia sign of Walter’s Hardware (c. 1955) on Broadway in Astoria, Queens, has also lost its neon tubes, but retains its stainless steel channel letters and trim.  Perhaps a good restoration lies in store.

Three fascia signs by Salzman, in Brooklyn and Queens.  (N-YHS)

One Salzman sign that has received a top quality restoration is that of Gringer’s Appliances (installed 1953), on First Avenue near Houston Street in Manhattan.  As the J. Josephs sign once did, Gringer’s sports a neon iteration (actually a pair) of General Electric’s signature logotype.  This sign was very nicely refurbished by Let There Be Neon in 2007.

Gringer's neon sign has been a beacon of home appliance retailing for nearly sixty years.  (T.Rinaldi)

Salzman’s best known sign, and surely one of the most noteworthy installations of storefront neon ever created in New York, is the great wrap-around fascia display at Nathan’s Famous in Coney Island, installed c. 1960.    Boasting an array of fluorescent colors and appealing typefaces, this is Salzman’s tour-de-force.  Perish the thought of Surf Avenue without this sign: a finer specimen of vintage neon exists nowhere in the five boroughs today.

Nathan's Famous, on Surf Avenue in Coney Island.  (T.Rinaldi)
For all he left behind, questions remain about Mr. Salzman and his signs.  Did he design these installations himself?  Or are they the work of one or more layout men on his payroll?   Did he or his layout designers receive any formal training?  Or did they learn their craft by apprenticeship?  Like so many of New York’s great sign makers, Salzman’s lasting impact on the appearance of the city goes largely without attribution.
If you know anything about the Salzman Sign Co., please drop me a line!