Of all the old signs in New York, the big rooftop spectaculars facing out over New York Harbor have always held a particular fascination for me.  Among these, the old World Telegram sign in lower Manhattan is a particular favorite.  I never saw it in person, but it turns up every now and then in old photographs of the downtown skyline, typically presiding over steam ferry boats, ancient sagging piers, and other long-vanished pleasures of the harbor. 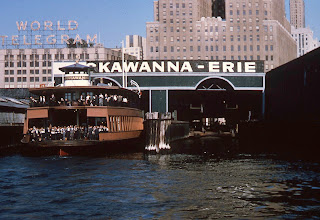 The World Telegram presides over another departure of the Barclay Street ferry, July 31, 1964; (Photo by A.R., T.W. Scull Collection; WSS/PONY)

One day not long ago, having hopped off a boat from Hoboken and marched east through the Irish Hunger Memorial, I glanced up and happened upon a vaguely familiar sight.  The World Telegram is long gone, but there atop its old art deco headquarters building, the steel armature that once held the sign aloft over the Barclay Street ferry docks is still there, a haunting reminder of the lost waterfront. 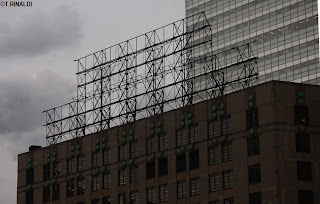 Similar neon relics can be found elsewhere, especially over in Long Island City.  But here where so much has changed in the past few decades, where the World Trade Center has come and gone and come again, where Battery Park City has risen over what was once open water, it seems more than a little bit remarkable to find such an odd vestige of the old skyline still with us.  Maybe it's just me, but that old steel skeleton seems to cry out for some big neon letters to once again take their place on the skyline.  Alas, the old World Telegram building no longer looks down over the bustling waterfront, but now sees its own reflection in the glassy facade of the 44-story Goldman Sachs tower at 200 West Street, built over the old Barclay Street ferry slips. 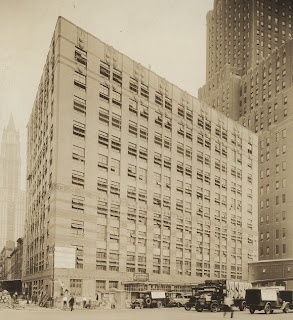 125 Barclay Street, the former World Telegram building, around the time of its completion - no sign yet - c. 1930.    The art deco building was the work of architects Howell & Thomas.  (flickr/CPL Fine Arts and Special Collections)