Look closely at 19th-century photos of the city streets and you'll see the ancestors of today's neon and LED signs there in the sepia.  Long before electric lamps, gas-lit signs peppered the nighttime streets of New York and elsewhere.  They came in various forms: some were basically just gas lamps with lettering or symbols painted on their glass globes.  Others were more sophisticated, using perforated sheet metal housings that presaged the eventual form of modern electric signs. 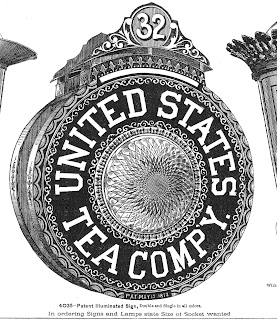 Vexingly, not one single surviving example of a gas-lit sign seems to have survived to the present (at least I couldn't find any - there must be one somewhere).  Even Tod Swormstedt at the American Sign Museum couldn't put his finger on one.  But with some digging, I managed to turn up a few odds and ends that give a sense for what they were like. 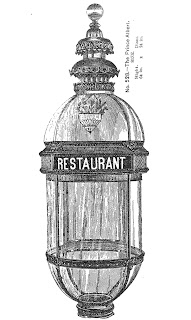 Simple gas signs were ordinary gas lamps with letters or symbols painted on their glass globes.  From the Mitchell, Vance & Co. catalog. (NYPL)

Sifting through back issues of Signs of the Times magazine, I ran across two descriptions of gas-lit signs.  "As a rule they were of box construction, with the gas jets inside," recalled E.A. Mills of the New York Edision Co. in 1922.  "The sides of the box were usually studded with vari-colored glass jewels outlining the letters.  These signs were usually found outside of drug stores, oyster houses, etc." 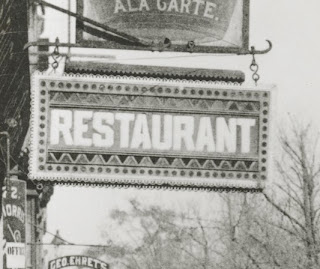 Mills also described a less common gas sign typology that must have been a sight to behold.  "This sign was made up of copper tubing bent in the shape of letters, and drilled at regular intervals, and the gas pressure so regulated that only a tiny flame was emitted."  These tended to be used indoors, he wrote, as they were "readily extinguished by every slight breeze. . . .    The result was very striking, even though the sign was more or less of a fire risk."  One example of this type of sign reportedly survived as late as the 1950s at the Arion Singing Society in Irvington, NJ, but was reportedly scrapped in 1953, leaving us to wonder what they might have looked like. 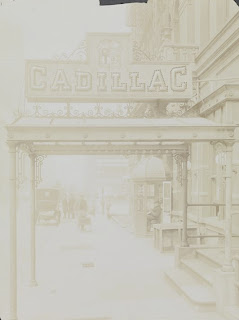 The Hotel Cadillac, at Broadway and 43rd Street. (MCNY)

In historic photographs, gas signs can usually be distinguished from electric signs by a telltale vent at the top that allowed exhaust from the gas jets to escape the metal housing. Based on the photographic record, their most common varietal seems to have been the "pedestal" sign, that would have been mounted atop a columnar stanchion by the curb, much like the old-timey sidewalk clocks that can still be found around town today. 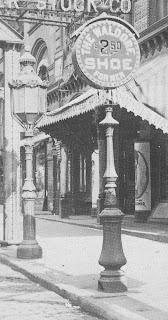 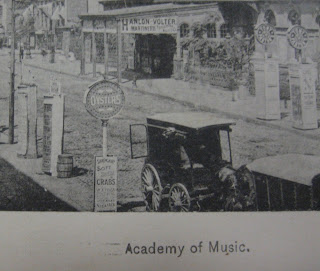 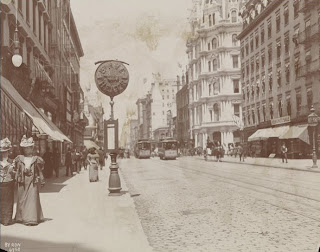 Gaslight signs of the "pedestal" variety turn up most often in history photographs, as attested to by these turn-of-the-century scenes on Jorolemyn St in Brooklyn (top), 14th Street (middle) and Broadway (below). (Younger, "Old Bkln in Early Photographs," top; Avery, middle; MCNY, below)

Gas-lit signs could be procured from purveyors of gaslight fixtures, which included them in their catalogs, or from sign shops.  Fitted with incredibly clever (and incredibly well-named) devices called "gaswinkers," the signs could even be made to flash on-and-off. 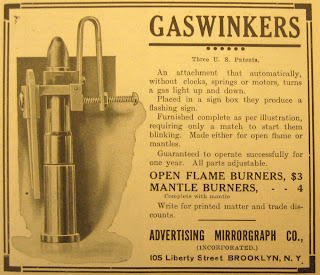 Ads for gaswinkers appeared in Signs of the Times magazine into the 20th century. (ST Media Group, used with permission)

Gaslight was a true phenomenon of the 19th century, first coming to New York in 1824 (CHECK THIS).  Though it was a revelation in its day, gaslight had many shortcomings: gaslamps posed a constant fire menace, they filled indoor spaces with heat and the smell of their exhaust, and coated walls and ceilings with a grimy residue. Edison's incandescent lamp made its debut in 1879 and began building New York's electrical grid in 1882, paving the way for gaslight's hasty demise in the decades that followed. 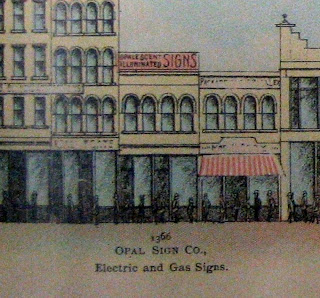 The Opal Sign Co., a maker of "Electric and Gas Signs," once occupied this storefront at 1366 Broadway. (Avery)

Evidence suggests that gaslit signs continued to be made into the first decade of the 20th century before finally yielding the streets to electric signs once and for all.  One imagines that some old gas signs must have been converted for electric lamps.  Their role in the development of all illuminated signs that followed them was hugely important: these are the true ancestors of neon.  Yet the gaslight signs are entirely forgotten today, a fixture of the nineteenth century city lost to the winds.

IN OTHER NEON NEWS:
• Via Buzzfeed: 35 Really Unfortunate Neon Sign Fails.  When will my tributes to bygone sign companies and gaswinkers go as viral as this has? Thanks to Joey F. and Christian R. for the link.