One of the best discoveries made in researching this little neon book of mine was a trove of historic portfolio photographs preserved by Ralph Garcia, a veteran of the Serota Sign Corp of the Bronx.  Large sign companies typically assembled portfolios of their work for promotional purposes.  But by the time I began my research, I heard over and over from the old-timers that I had come too late: "Shoulda called me 20 years ago," they would say. "We threw all that stuff in the trash." 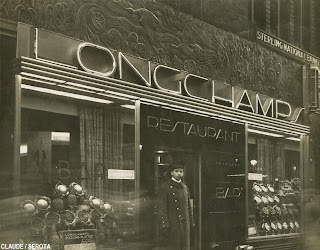 This remnant of Serota's portfolio was on its way to the trash when Mr. Garcia rescued it more than 20 years ago. It shows about fifty of the thousands of neon signs made by Serota between the 1930s and the 1960s - just a tiny fragment of the company's output.  Some of the older photographs appear to have been inherited from Claude Neon Lights of New York, which Serota took over in 1941.

From modest origins, Serota grew to become possibly the largest and most important sign company in New York by the late 1940s, second only to the better-known Artkraft Strauss Sign Co.  While Artkraft Strauss earned widespread notoriety as the fabricator of the enormous Times Square "spectaculars," Serota made its trade installing storefront signs across the five boroughs and beyond, its name known to few outside the sign industry. 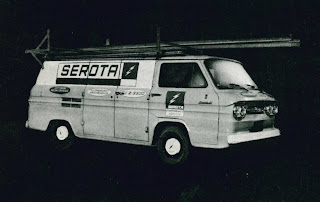 Records indicate that Max Serota established Serota Signs around the late 1920s.  A sign painter by trade, Mr. Serota immigrated to the United States from Russia in 1902.  The company grew quickly: in 1941, Serota purchased Claude Neon Lights, Inc., which had formed in 1924 as Georges Claude's first American franchise. (Historians generally cite Claude as the father of neon signs as we know them today.)  Control of the firm eventually passed to Theodore "Teddy" Serota, the founder's son, and later to Richard Diederle, who remained a prominent figure in New York's sign business for decades.

After a series of mergers and acquisitions begun in the 1990s, Serota finally found itself absorbed by Spectrum Signs of Farmingdale, Long Island, which keeps the Claude/Serota legacy alive as one of the most active sign companies in New York today. And while old signs bearing the Serota decal can still be found all over town, not one of the signs pictured in Mr. Garcia's salvaged portfolio appears to have survived intact, making this something of a glimpse at a vanished city.

A NOTE ON THE PHOTOGRAPHS: None of the photos are marked with locations or dates.  Where possible, I have figured out locations with some light detective work.  For some, I have linked the address in the caption text to current views of the same location at Google Street View.  The dates are based on educated guesses or clues in the photos.  Please contact me if you can add anything to the exact locations of the photos, details on the businesses pictured or on the Serota Sign Corp. 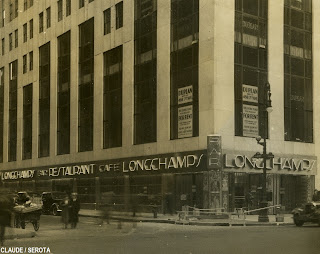 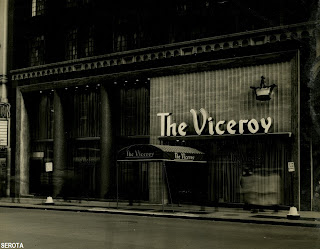 The Viceroy / 565 Lexington Ave., Manhattan, c. 1950. The Viceroy and its sign are both long gone, the 1950s alteration shown here having made way for a re-creation of the building's prewar appearance.  (R. Garcia/Serota Sign Corp., Jules Germain photo) 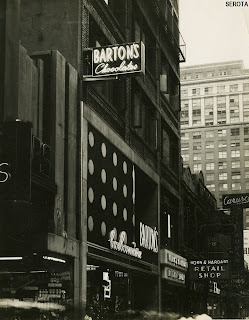 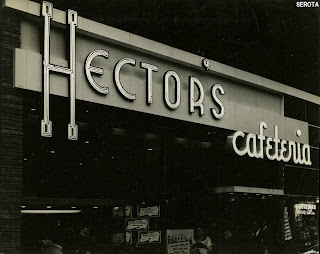 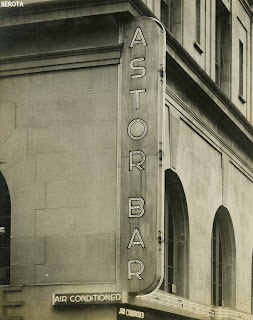 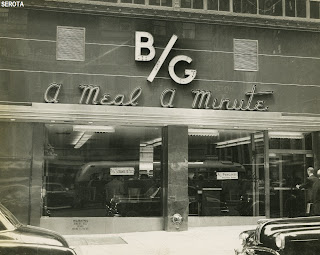 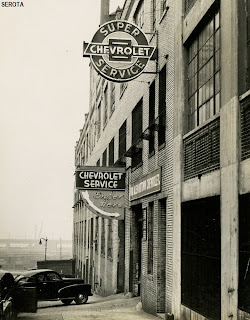 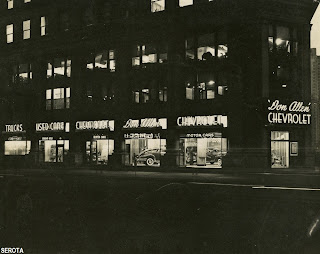 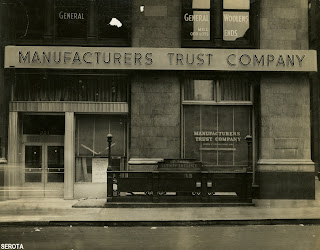 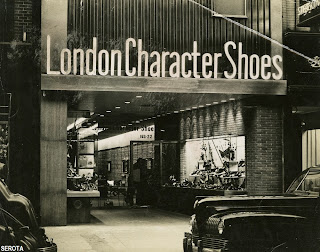 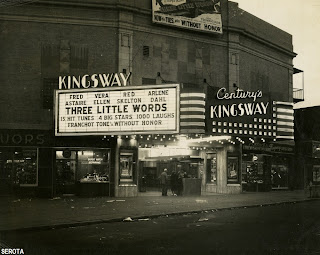 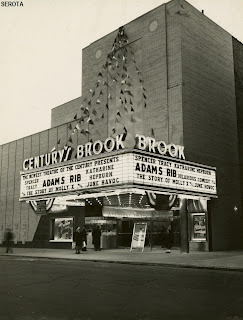 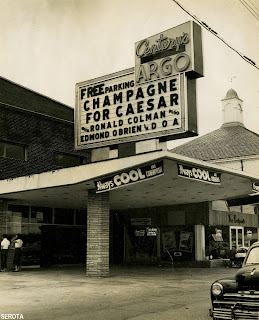 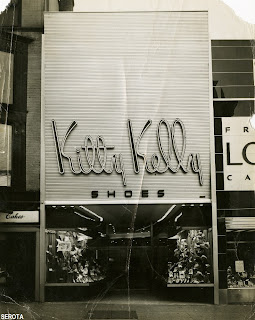 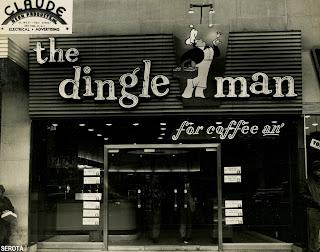 The Dingle Man / location undetermined, c. 1960. Serota continued to use the Claude name in addition to its own for many years after its acquisition, as the label in this c. 1960s photo attests.  (R. Garcia/Serota Sign Corp., Daphne Studio photo) 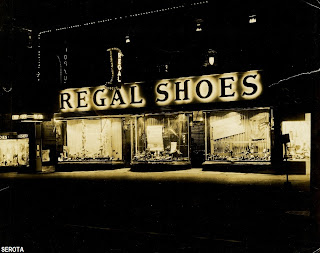 Regal Shoes / location undetermined, c. 1950. The big Regal boot hanging over this storefront appears to be identical to one preserved at the American Sign Museum in Cincinnati, Ohio.  (R. Garcia/Serota Sign Corp.) 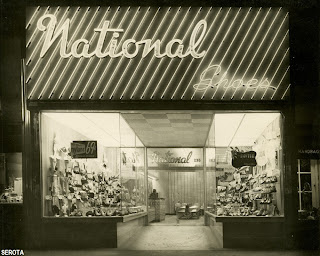 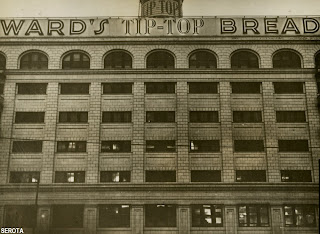 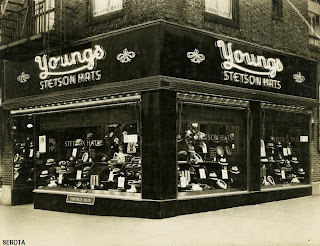 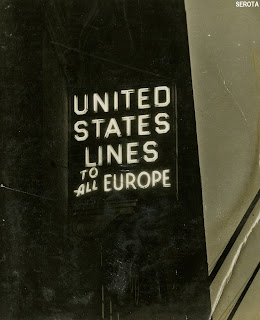 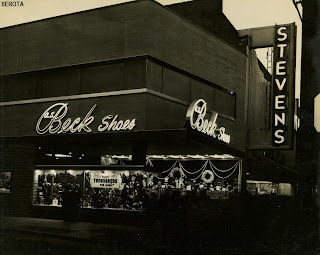 A.S. Beck Shoes / location undetermined, c. 1950.  Under an el, presumably on an outer borough commercial strip.  Alas, I could not figure out where.  (R. Garcia/Serota Sign Corp., Jules Germain photo) 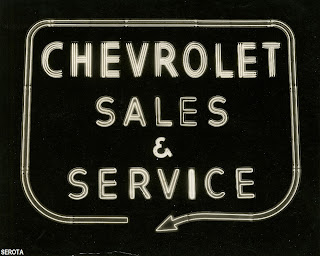 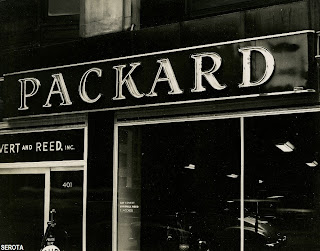 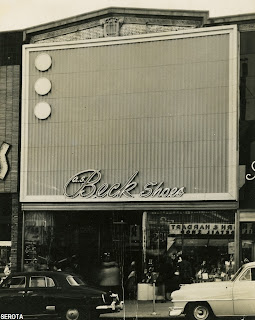 MANY THANKS to Ralph Garcia for the images used in this post.
NEW YORK NEON IN THE NEWS:

• NYNeon featured in this Wall Street Journal video story - special thanks to Emily Prapuolenis, Anna Russell and Eben Shapiro for making me sound somewhat coherent!
• A day in the life of this project brilliantly summed up in this amazing piece by Kim Velsey in the New York Observer.
• An interview with George Bodarky on WFUV's CityScape.
• A very flattering NYNeon redux by Laura Itzkowitz in Untapped New York.
• Photos from last week's lecture at South Street Seaport, sponsored by the Historic Districts Council.