"Talk to Paul," the man told me on the phone.*  "He'll tell you anything you want to know about the sign."  I could hardly believe my luck!  Here in my hot little hands I had a lead on the true provenance of a real New York icon: the Tom's Restaurant sign, on Broadway at 112th Street, known the world over thanks to its regular appearances in the TV sitcom "Seinfeld." 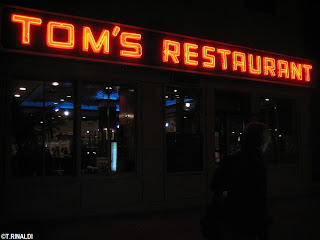 Already, what I had managed to learn about the sign had piqued my curiosity.   Records at the Municipal Archives indicated that it had been installed by an unknown sign company in 1957, for an establishment known as the Columbia Restaurant.  This got me to wondering: did the part of the sign that now reads "TOM'S" originally say "COLUMBIA"?  Perhaps in a jaunty midcentury script?  On my next trip to Tom's, with furrowed brow, I gave the old sign a close examination.  A few anomalies quickly caught my eye.  First, the lettering for TOM'S doesn't quite match the adjacent lettering for RESTAURANT (TOM'S being slightly more extended, or wider, than the rest).

The lettering for TOM'S is slightly different from that for RESTAURANT. (T. Rinaldi)


Then there's the sign's hand-painted finish.  By 1957, hand-painted neon signs were pretty much a thing of the past in New York.  More likely, this would have had faces of porcelain enameled steel, which could have been painted over later to cover-up a name change.  And finally, there is a tell-tale seam in the sheet metal sign face between TOM'S and RESTAURANT – could it be that the part reading COLUMBIA was cut-off and replaced with new sheet metal, and then the whole thing painted in the blue-and-white colors of Columbia University?  The answer to this mystery, I hoped, lay with this man Paul. 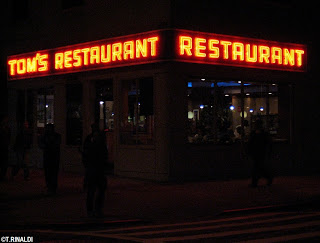 At length, the day came.  I called ahead to be sure he would be working.  A few hours later I found him there, stationed at the cash register.  I introduced myself and explained my bizarre cause.  The man was friendly and gregarious, as Tom's staff usually are.  But it soon became clear that he couldn't tell me anything about the sign.  He had been there a long time, he said, but the sign was there longer. 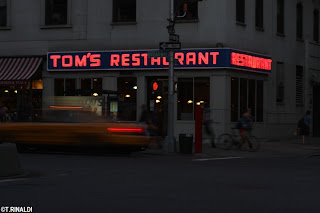 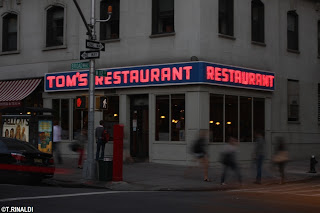 
For now, at least, the secret of Tom's neon is safe.  As far as most of the world is concerned, however, this whole question is of marginal significance, literally: throughout its tenure on "Seinfeld", the TOM'S portion of the sign was neatly cropped out of view, and the place was known to viewers as the fictitious "Monk's Coffee Shop".  Out of sight, out of memory. 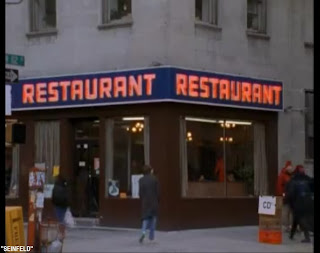 Email ThisBlogThis!Share to TwitterShare to FacebookShare to Pinterest
Labels: Manhattan, Upper West Side