I know what what's on your mind, Tess McGill.  It's been a tough day.  Trouble at the office, and you just found out your boyfriend's been schtupping some cheap floozy on the side.  But I know what you're really thinking as you stand by the rail of the Staten Island ferry, gazing out at the Manhattan skyline.  Just like me, you're wondering: "what the hell is that red neon roof sign up there to the right of the Woolworth building?" 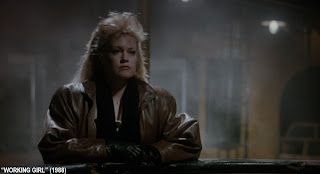 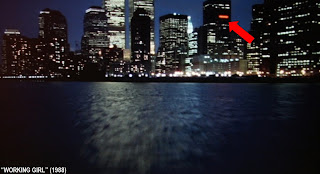 OK, maybe that's not what Melanie Griffith's character had on her mind in this pivotal scene of Mike Nichol's 1988 film "Working Girl."  But it sure bugged me.  Such is my twisted, neon-obsessed view of the city.  A big roof sign in Lower Manhattan?  There aren't any there now, and I don't ever remember seeing one.  Oh well.  Tess McGill had bigger things to worry about, and so did I, really, so I filed this little mystery away into my mental accordion folder and turned my thoughts back toward the awesome eighties exploits of Melanie, Harrison, and Sigourney. 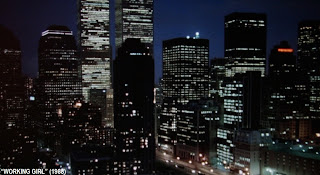 Then, about two months ago, while browsing some old New York photos online, something caught my eye.  Something high up, on the upper reaches of one of the lesser-known downtown skyscrapers. 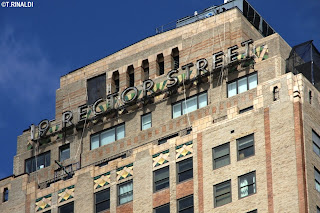 The Working Girl mystery sign, I soon learned, belonged to a tower known only by its address: 19 Rector.  And, much to my surprise, the sign is still there, though it hasn't lit up in a good long time.  Its installation date is thus far unclear.  My search of the DOB web site was a bust.  The building went up in 1930, a jazz-age tower by architect Lafayette Goldstone, but the sign seems to be a later addition.  Zoning ordinances enacted in the 1960s pretty much banned roof signs like this (New York's skyline is less colorful now than it was then as a result).  But the city's restrictive sign laws probably wouldn't have applied in this instance, since the copy features only the building's address, not a commercial message.  Still, judging by the patina of its sheet metal channel letters, I'd suspect this guy was here well before the 1960s. 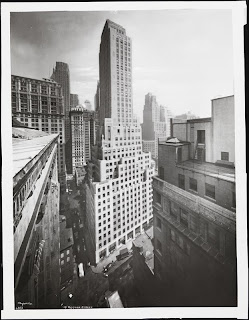 19 Rector, west facade, around the time of its completion in 1930.  The sign would be out of view, on the south elevation.  (Arthur Vitols, Byron Co. / Museum of the City of NY)

The real mystery, though, is why the building let the sign go dark.  Actually, I suppose it's not so mysterious.  Just like the long dark roof sign over at Tudor City, the management probably just got tired of dealing with its upkeep.  A few of the letters probably went into a dim flicker; a steep repair quote sealed the deal, and the big red letters over 19 Rector joined New York's ghost fleet of darkened roof signs: Domino Sugar, Kentile Floors, Tudor City, the Hotel New Yorker.  In recent years, a few of these have come back to "light" (sorry!), albeit with LEDs rather than neon (see the Lackawanna Terminal sign in Hoboken and the Hotel New Yorker in Midtown).  Perhaps one day this old girl will get back to work, too.  To do so, however, may require some re-lettering: built to house offices, about 12 years ago the tower went condo, taking on a new address (88 Greenwich) in the process. 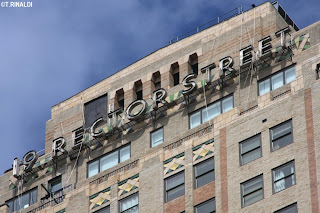 • In case you missed last week's post - the neon book is out the door!
• After my post two weeks ago, the Chelsea Hotel sign seems to have mysteriously come back to light.  Hmmmm....
• In LA, a candidate for the world's longest continually-functioning neon sign, at Clifton's Cafeteria on Main Street.
• It's not neon, but on a related note - by way of various sources, the one and only Prime Burger on East 51st Street is closing.  A Landmark-worthy fortess of Formica, with a pretty good old back-lit sign hidden under its awning.  A nauseating loss.