One of the more fortuitous breakthroughs I had in researching this neon book of mine was when I managed to get in touch with Justin Langsner, the third-generation proprietor of the LaSalle Sign Corp. of Brooklyn.  In addition to sharing some incredibly valuable insights and anecdotes, Mr. Langsner lent me a small trove of old photographs he happened to have lying around, a selection of which are reproduced here below.  Not glamour shots, these are working reference photos dating from the 1960s and 70s. They offer an interesting window into the neon business in New York during a time of change both for the city and for the signs themselves. 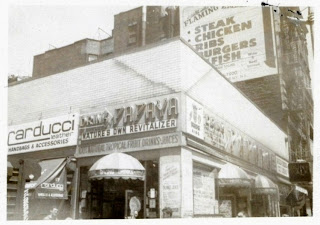 LaSalle made and installed these signs for the original Papaya King, at Third Avenue and East 86th Street, in 1964.  The signs survive today.  (Justin Langsner / LaSalle Sign Corp.) 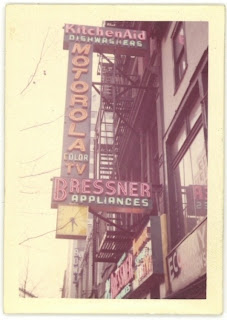 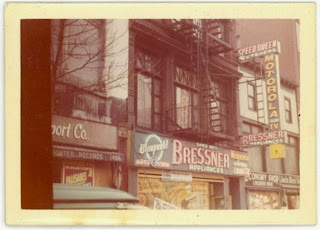 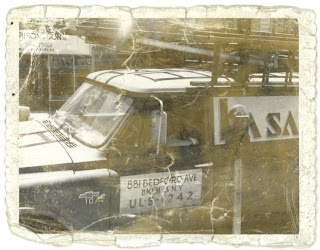 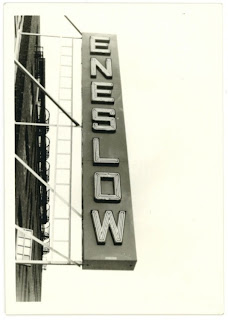 Eneslow Shoes, at 2563 Webster Avenue in the Bronx. Eneslow has since decamped (the company is still alive and well elsewhere), but the sign remains in place, sans-neon, ghosts of its old lettering still visible. (Justin Langsner / LaSalle Sign Corp.) 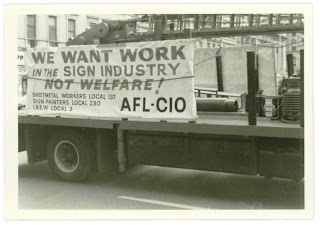 A boom truck (not LaSalle's) dressed for labor action.  Most of New York's neon signs were union made. (Justin Langsner / LaSalle Sign Corp.) 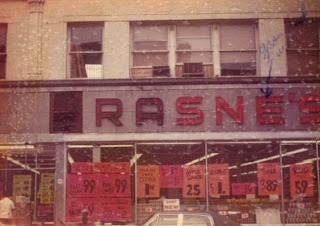 An insurance job:  like other sign companies, LaSalle's services included sizing up damage claims for insurance companies.  This photo shows Krasne's Super Market, at 1008 Flatbush Avenue in Brooklyn, which had sustained damage during a storm. Both supermarket and sign are gone today, but a big letter "K" in the masonry of the cornice above remains.  (Justin Langsner / LaSalle Sign Corp.) 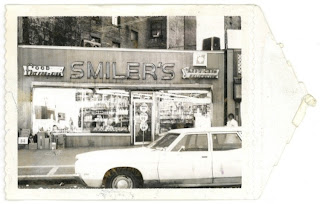 LaSalle's sign for Smiler's Delicatessen on Seventh Avenue South made a small cameo in the classic opening sequence to Woody Allen's 1979 film Manhattan.  "Smiler's was run by a very smart old lady - Sarah Smiler, I think," Mr. Langsner remembers.  Sam Langsner, Justin's father, once happened to notice some delivery men pilfering from a shipment of merchandise they had brought to the store, and mentioned it to old Mrs. Smiler.  "Sam," she said, "listen:  I live in a great big penthouse apartment, and I make more money than the President of the United States.  If you think I'm gonna spend $10,000 on some security guy to tell me I'm losing $5,000 worth of merchandise, you're crazy." 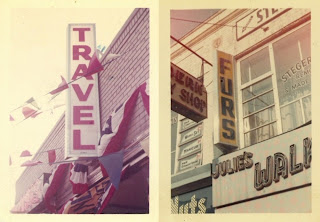 An interesting evolutionary study can be made between LaSalle's signs for Gray's Papaya, installed in 1972, and those made for the Papaya King eight years earlier.  In those few years, porcelain enamel sign faces and neon illumination made way for plexiglas, aluminum and standard fluorescents.  But hand-drawn, original lettering had not yet yielded to computer-generated fonts. The Gray's Papaya signs have been slightly altered over the years, but their inventive lettering remains intact today. 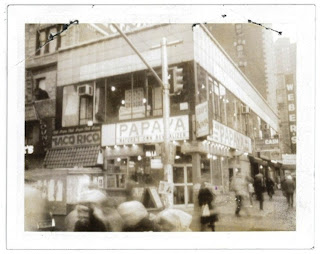 Signs for Gray's Papaya, 2090 Broadway (at West 72nd Street) in Manhattan, around the time of their installation in 1972.  (Justin Langsner / LaSalle Sign Corp.)

As any New York signman will attest, one meets all sorts of characters in the neon business.  Mr. Langsner recalls checking on a job at one of the Char Broiled Flame Steak joints around Times Square, circa 1971.  "These two men came in dressed as women - big husky black guys - and asked to use the ladies room," he remembers.  "The owner told them no way, so they pulled out a knife and said he'd better let them use the bathroom.  The owner ran behind the counter and picked up a meat cleaver.  There they were, right in the middle of the lunch hour, it looked like they were gonna kill each other."  The episode was a snapshot in a period of transition - a sign of the times, one might say.  As luck would have it, a pair of cops showed up (to get lunch) and managed to broker a peace settlement before things got out of hand.  In the neon city, never a dull moment. 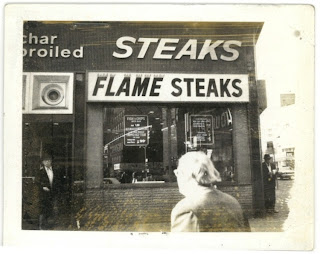 MANY THANKS to Justin Langsner for the photos and anecdotes in this post, and to Robbie and Gasper Ingui of Artistic Neon for helping to put us in touch. Be on the lookout for another post down the road tracing the history of LaSalle Signs.

• From JVNY: Has Manganaro's closed?
• Word by way of an e-mail from Kyle S. that Walter's Hardware in Astoria has closed, leaving its tubeless neon sign at risk.
• A celebration of New York's vernacular lettering, also by way of JVNY.