There ought to be a monument to the man who invented neon lights. Fifteen stories high, solid marble. There’s a boy who really made something out of nothing.
Raymond Chandler, The Little Sister, 1949
For most of the 20th century, historians have credited the neon sign to the French inventor Georges Claude.  In my own research, however, I came to see this as a gross over-simplification.  Daniel McFarlan Moore (1869-1936), an American inventor who essentially developed the concept of the neon sign as we know it, has been almost completely forgotten by history. 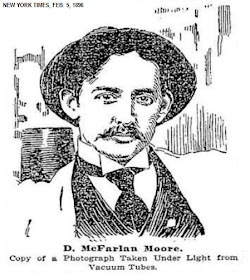 The Prime of Daniel McFarlan Moore.  (New York Times, Feb. 5, 1896)
To ask "who invented the neon sign" is to pose a trick question.  Neon gas exists in the air we breathe: it was discovered, not invented.  Probably half of all so-called neon signs don't use neon at all (argon is typically used for colors other than red).  Neon and argon lights meanwhile are both varieties of "luminous tube" lamps, which likewise have no preeminent inventor. 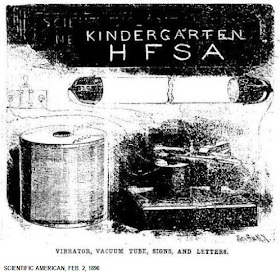 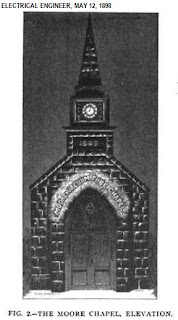 ABOVE: The "Moore Chapel," a small chapel mock-up illuminated by Moore tubes, was a main attraction at the Electrical Exhibition of 1898, held at Madison Square Garden.  Over the door, a Moore Tube sign welcomed visitors to the "Moore Vacuum Tube Chapel".  (Electrical Engineer, May 12, 1898)

Around the year 1895, Moore began making electric signs using luminous tubes bent into the form of letters or shapes.   Previously employed by Thomas Edison, Moore set up shop on his own in the early 1890s to develop a new kind of electric lamp that he thought would improve upon Edison's incandescent bulb, which Moore called "too small, too hot, and too red".  To do this, Moore looked to an alternate technology known as gas discharge illumination. 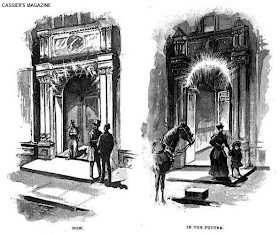 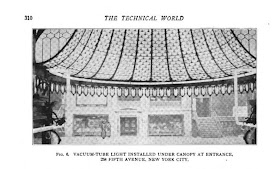 ABOVE: Moore tubes at an entrance canopy on Fifth Avenue in New York.  (The Technical World, May 1905)


A gas discharge lamp is a sealed glass tube with electrodes at each end; the tube is filled with a gas that glows as it conducts electricity across the gap between the electrodes.   Experiments based on this idea date back to the 17th century.   The German physicist Heinrich Geissler made headway with gas discharge lamps in the 1850s, but Moore took the concept further in the 1890s, producing luminous tubes that were sold commercially for conventional lighting and for electric signs.  Neon gas had yet to be discovered, so Moore used carbon dioxide instead. 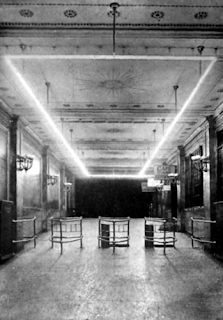 ABOVE:  Moore tubes installed in the main entrance lobby at Madison Square Garden in New York, c. 1905. (Artificial Light: Its Influence upon Civilization, by Matthew Luckiesh, 1920)

Moore's idea turned out to be fatally ahead of its time.  He unveiled his tube lamp in 1896, just two years before the discovery of neon gas.  To keep them lit, Moore had to fit the tubes with a pump that replenished the gas inside.  Over the next decade, Moore struggled to make his lamp a viable competitor of the incandescent bulb.  Neon remained scarce and very expensive, so Moore experimented with other gases, such as helium and nitrogen.  Moore's goal was to make a lamp for general illumination: he would have seen neon's characteristic red glow as a significant handicap. 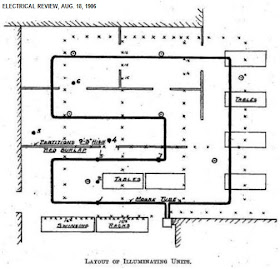 Georges Claude meanwhile literally found himself with neon gas he didn't know what to do with.  Claude's company, Air Liquide, supplied specialty gases for industrial use.  In seeking a commercial use for neon, Claude eventually decided to make an improved Moore tube using neon gas.  He sought to patent the idea in France in 1910, and in the United States the following year.  Neon's orange-red glow may not have been suited for general illumination, but, as Claude discovered, it fit the bill for electric signs. 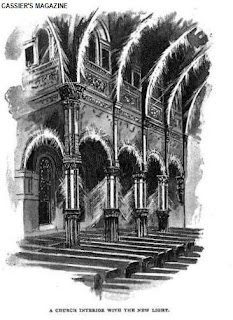 ABOVE: Rendering of a proposed Moore tube installation for a church.  (Cassier's Magazine, September 1894) 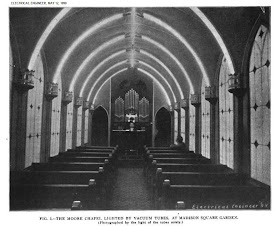 ABOVE: Interior of the Moore Chapel at the Electrical Exhibition of 1898.  (Electrical Engineer, May 12, 1898)
At around the same time, the introduction of tungsten filaments suddenly improved the efficiency of incandescent bulbs, thus dampening the impetus for Moore's improved electric lamp.  Sufficiently discouraged, Moore reconciled with Edison in 1912:  he sold his patents to General Electric and took a position with the company's research labs, where his later work included pioneering developments toward the advent of television. 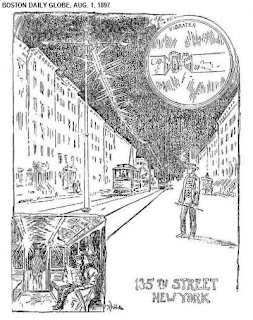 ABOVE: Moore proposed tube lighting for streetcar interiors and for outdoor street lighting in New York. (Boston Daily Globe, August 1, 1897)
On the evening of June 14, 1936, Moore received a visit at his home in East Orange, New Jersey from a certain Jean Philip Gebhardt, a spurned inventor who apparently felt Moore had stolen one of his ideas.  "Oh, that's that nut from Brooklyn," Moore remarked, and went to bed.   Gebhardt returned the next morning and fatally shot Moore twice in the head (Gebhardt committed suicide two days later).  GE introduced the modern fluorescent lamp – a descendant of the Moore tube – in 1938. 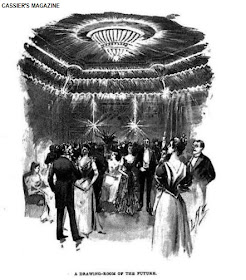 ABOVE: Moore tubes to light "the drawing room of the future." (Cassier's Magazine, September, 1894)

ABOVE: "The drawing room of the future," perhaps not exactly what Moore had in mind - Club Babylon, Tony Montana's hangout in the 1983 film Scarface.
Images of Moore tube signs are exceedingly difficult to find today, and not one physical example seems to have survived anywhere.  Signs were an afterthought for Moore's purposes, and he concentrated on conventional applications such as indoor and street lighting. 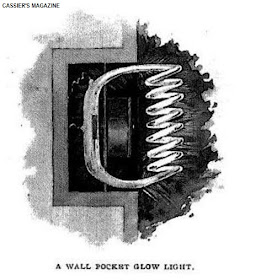 ABOVE: Rendering for a Moore tube sconce.  (Cassier's Magazine, September 1894)
But the Moore tube's most successful application seems to have been for electric signs.  "I had the impression that it was good only for illuminated signs and relatively unimportant work," remarked electrical engineer Gano Dunn of the Moore Tube in 1907.  One later account recalls that Broadway was "flanked with a double row of this new type of electrical advertising" in the early 1900s. The credit for making luminous tube signs the 20th century icons they became goes to Claude, but it was Moore who developed the concept and first made it a commercial reality.

Please contact me if you know of any Moore signs that still exist, or any images of them.

FOR MORE, SEE:
• More about Moore at the Smithsonian.
• "The Moore Electric Light," in The Technical World, May 1905 (via Google Books)
• "The Light of the Future," in Cassier's Magazine, September 1894. (via Google Books)
• Complete bibliography for this story at this link.

IN OTHER NEON NEWS:
• The great NYPD sign in Times Square has multiplied.
• I will give a brief lecture on neon sign conservation for the Association for Preservation Technology / Northeast Chapter's Historic Lighting symposium at the Wadsworth Atheneum in Hartford, CT on Friday, Feb. 3, 2012. Please join if you're in the neighborhood.
• New addition to the database at nyneon.org: an unknown travel bureau sign on Austin St. in Forest Hills, Queens (for real this time).
T.E. Rinaldi at 5:26 AM
Share