Last week came truly depressing news (by way of Project Neon and Brownstoner) on the disappearance of Maiman's Pharmacy and its splendid sign, which wrapped the corner of Franklin Avenue and  Eastern Parkway in Crown Heights, Brooklyn for six decades.  This is the seventh classic neon sign to go dark or disappear so far this year in New York (as far as I know), all of them vanished with old independent businesses that have bitten the dust. 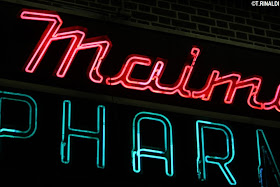 Maiman's had what I considered to be one of the best old signs in all of New York: first rate midcentury block and script letterforms, outlined in stainless steel channels and neon tubes in vibrant hues of pink, turquoise and white that set each other off beautifully. 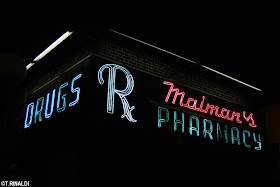 The sign appeared around 1951, the work of the Silverescent Neon Sign Co. of Brooklyn.  Some time ago I interviewed Al Higger, the retired former president of Silverescent, who recalled that the Maiman's sign was an example of a somewhat standardized design scheme the company deployed for drug store jobs throughout the city in the 1950s.  The design was developed by Silverescent's longtime layout man Charlie Klein, whom Mr. Higger recalls as a talented draughtsman and, like most neon layout men in New York during those years, a member of the Sign Painter's Local 230. Klein's drug store signs usually involved script lettering for the owner's name, block letters for DRUGS or PHARMACY, and some variant of the traditional "Rx" prescription symbol for full effect. 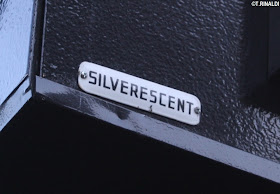 When Mr. Higger told me this, another sign popped almost immediately into my head: that of the Antelis Pharmacy on Elm Avenue in Midwood.  Here survives another example of the Silverescent/Klein drug store sign.  Like Maiman's, the Antelis sign features the owner's name in script, set against block letters reading PHARMACY and a fine Rx symbol, illuminated in three shades of neon.  The script and the Rx symbol differed slightly between the two signs, but the block lettering was the same.  Interestingly, Mr. Klein seems to have employed the same sans-serif letterforms for another vanished Silverescent sign, at the old Faber's Arcade on Surf Avenue in Coney Island, which disappeared over the winter of 2010-2011. 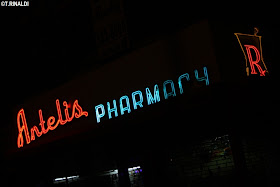 Two iterations of the Silverescent/Klein drug store sign, at Maiman's (above) and the Antelis Pharmacy (below), at 1502 Elm Ave. in Brooklyn. (T. Rinaldi) 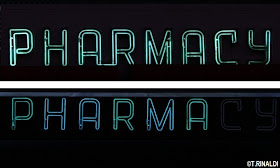 Block lettering at Antelis (above) and Maiman's (below). (T. Rinaldi)

Silverescent seems to have used the same letterforms at the former Faber's "Fascination" arcade in Coney Island. (T. Rinaldi)

I first photographed the Maiman's sign back in June 2009, during an epic all-day neon appreciation schlep that took me and a friend from Manhattan to Bed Stuy to Ozone Park to Far Rockaway then back to Crown Heights and finally Coney Island (we bade a grand farewell to the old R40 series subway cars that same day).  I came away with nice shots of Maiman's all aglow that night, but I wanted dusky shots for the neon book, so I eventually returned only to find the sign partially dimmed, apparently with a few transformer outages.  I tried again some months later but found the place closed for the night and the sign completely dark.  I had better luck this past December on my next (and last) trip, but then – after all that – I wound up using shots from that first visit back in 2009 for the book. 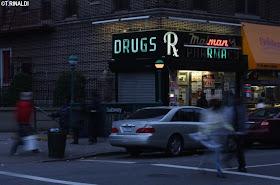 
Somewhere along the way the owners gave the sign a good sprucing up, perhaps around the time the place changed hands a few years ago.  Someone cleaned and painted the porcelain enamel sign faces (painting porcelain enamel is like painting brick – sort of senseless but hey, points for TLC).  Whoever did this clearly had an appreciation for the sign:  the old Silverescent manufacturer's tag was carefully removed, cleaned and reinstalled, instead of just being painted over as usually happens.  This left me with the sense that Maiman's was in good hands and would be around for some time to come.  Alas, a grizzly photo at Brownstoner confirms the bad news that the sign and store have gone, leaving a dark and dreary sight in their wake.  Could it be that the sign found a good retirement home somewhere?  Fingers crossed.  Meanwhile, we still have at least one classic Silverescent/Klein drug store sign over at the Antelis Pharmacy – run out and admire while the admiring's good. Satisfy your pharmaceutical needs while you're at it. 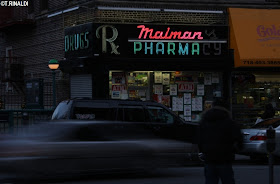 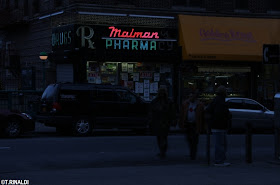 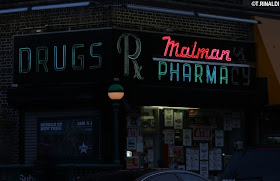 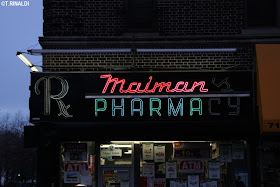 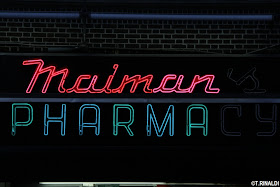 • Every so often, some good news: at JVNY, progress on the Beatrice Inn sign restoration.
• At Ephemeral New York, some forgotten signs under awnings.
• Word from the Lost NY blog that Sokol Furniture in Red Hook, Brooklyn is closed and the sign likely gone or going soon.